CHERISH THE ENRICHED LEGACY – The Harmonist, Volume one now available in Ebook format 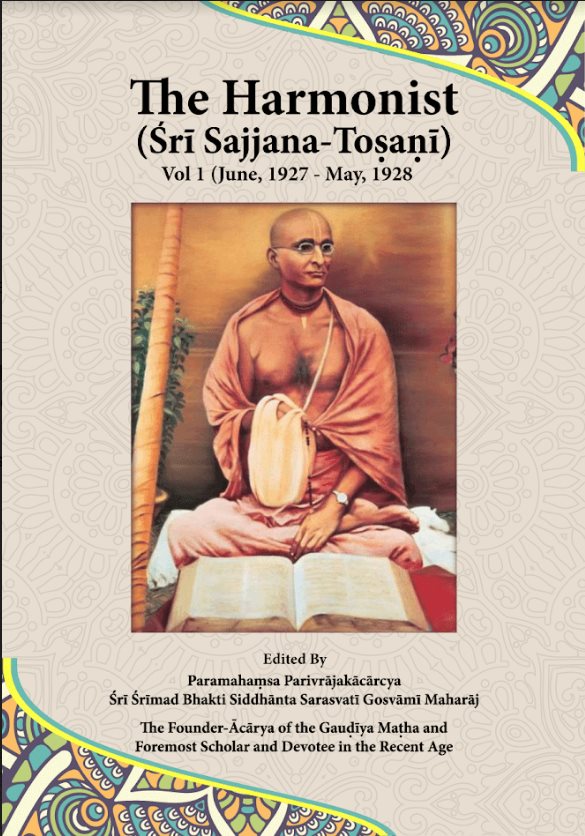 The Harmonist, Volume one now available in Ebook format

After two years of sheer hard work and utmost determination, Touchstone Media is proud to unveil the first dose of the crest jewel of Vaisnavism and gamut of Vaisnava philosophy in the form of ‘The Harmonist, volume 1, Ebook’.

The original version of The Harmonist appeared as ‘Sri Sajjana Tosani’ in Bengali in the year 1879, published by the Vaisnava pioneer Srila Bhaktivinoda Thakura. Upon his departure, his son Srila Bhaktisiddhanta Sarasvati Thakura instituted his preaching mission, Sri Gaudiya Math and established a printing press. In June 1927, he launched ‘the Harmonist’ which was an English magazine with the same format as ‘Sri Sajjana Tosani’. He continued publishing the magazine until 1936, the year he passed away.

The Harmonist is an unfathomable ocean of intricate and emphatic conclusions of the Vaishnava stalwarts, encompassing deep philosophical inferences, intriguing secrets of God consciousness, insightful Vedic and Gaudiya Vaisnava traditions, rich Vaisnava heritage, significant historical events, analytical view of devotion along with politics, social and economic aspects, an in-depth scrutiny of favorable association and growth in devotion with that association.

“My Name will be preached everywhere, in all the villages and towns of the whole world”.

The ‘Harmonist’ seeks to carry out this desire of the Lord. For the present the magazine is appearing in English, Sanskrit and Hindi. But it does not by any means desire to confine herself to these languages only. The Lord desires His Word to be preached to all living beings. The ‘Harmonist’ stands for this desire. It cherishes the faith that a day will come when His Word will be preached everywhere all over the world through the medium of all the languages including the language of animals and plants when this will be practicable. It believes that Lord Gaurasundara will in the fullness of time raise up fit preachers in every part of the world and in numbers amply sufficient for His Purpose. This is the message of the ‘Harmonist’. (An excerpt from The Harmonist)

Srila Bhaktisiddhanta Sarasvati Thakura’s sublime and solid teachings which were once available in 8 thick volumes are being crystallized into Ebook format for the convenience and better understanding of the readers and spiritualists. The set of books were heavy and inconvenient to carry around, so the readers have been requesting the director of Touchstone Media, Isvara Das, for an Ebook version of this magnificent book for a long time. Hence, being able to take a significant step towards fulfilling that request, gave him immense joy.

Touchstone Media has put in all its resources to scrutinizingly scan, compile, convert and present the contents of the first volume of the magazine in the form of a PDF, exclusively for all the ardent readers.

For the Harmonist Vol. 1 Ebook, you can directly click on https://www.touchstonemedia.com/harmonist-as-it-is-volume-1-ebook-pdf/ and for any further suggestions or queries do get in touch with the Touchstone Media team at +918336916108 or write at sales@touchstonemedia.com

Dear Bhagavatam!
Raise funds, expand the congregation with this course for kids