Janmashtami celebrations on in full swing at an Isckon temple 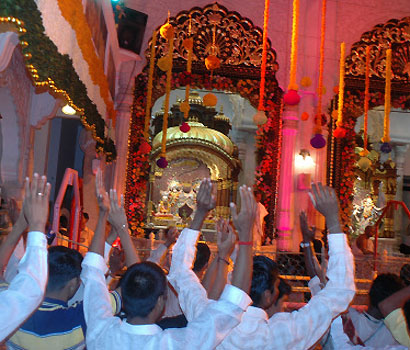 NEW DELHI: Thousands of devotees thronged temples since early Wednesday to celebrate Janmashtami – the birth of Lord Vishnu’s eighth reincarnation – but the power crisis forced temples to scale down their decorations.

Temples and homes have been decorated and floats depicting stories from Lord Krishna’s childhood can be seen at temples.

The Lord was being invoked with kirtans (religious choruses) ringing of bells, blowing of conches and chanting of Sanskrit verses.

The celebrations at ISKCON temple started with an arti , a ritualistic oblation. Hundreds of people danced to the beat of drums and incessant chanting of hymns.

“We are welcoming every one to join the celebrations,” a temple official said.

The Lakshmi Narayan temple, also known as the Birla temple, was decked up with flowers and devotees were seen gathering at the temple early for prayers.

“We visited the Birla Temple at 8 a.m. because all the adult members were fasting. It’s the birthday of the Lord of the Universe and we will visit several temples,” said Sashiprava Aggarwal, a Lord Krishna devotee.

Due to security reasons devotees were not allowed to carry liquids or the traditional offering of coconuts to the Birla temple. They were only allowed to offer sweets, fruits and flowers to the Lord. The visitors had to go through security checks to enter the ISKCON temple.

The authorities have made arrangements for a 24-hour celebration at the famous Akshardham temple.

“The celebrations started with ‘aarti’ and other services. There is a special function in the evening which will begin at 7.30 p.m. and continue till midnight,” said Prakash, the temple administrator.

However, due to the power crisis temples across the capital, the smaller temples had to scale down their lighting arrangements.

“The decorations are mostly floral,” Swami Charansinghji, a priest in an east Delhi temple revealed.