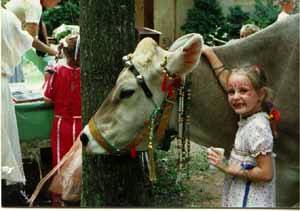 “What is this?? Ten thousand cows are being killed every day…And you are preaching nonviolence. (chants japa)” – SRILA PRABHUPADA

“….So in this movement, our one program is to respect the cows. We chant this mantra, namo brahmanya-devaya go-brahmana-hitaya ca. The brahminical culture and the cows… Why they have selected the cows? There are so many animals. Why cow protection is so important in Krsna consciousness? Why Krsna personally Himself became a cowherd boy and was taking the care of the cows and the calves? Oh, that is very essential.”SRILA PRABHUPADA, Srimad-Bhagavatam 1.16.19 — Hawaii, January 15, 1974

“It is not that national leaders should be concerned only with human beings. The definition of native is “one who takes birth in a particular nation.” So, the cow is also a native. Then why should the cow be slaughtered? The cow is giving milk and the bull is working for you, and then you slaughter them? What is this philosophy? In the Christian religion it is clearly stated, “Thou shalt not kill.” Yet most of the slaughterhouses are in the Christian countries. This is all a misunderstanding of spiritual life. Every animal should be given protection. That is the Vedic idea.” – SRILA PRABHUPADA, From The Quest for Enlightenment, “The Mercy of Lord Caitanya”

“….So in this movement, our one program is to respect the cows. We chant this mantra, namo brahmanya-devaya go-brahmana-hitaya ca. The brahminical culture and the cows… Why they have selected the cows? There are so many animals. Why cow protection is so important in Krsna consciousness? Why Krsna personally Himself became a cowherd boy and was taking the care of the cows and the calves? Oh, that is very essential.”SRILA PRABHUPADA, Srimad-Bhagavatam 1.16.19 — Hawaii, January 15, 1974

“I can be worshiped within the Cows by offerings of grass and other suitable grains and paraphernalia for the pleasure and health of the Cows…” Lord Sri Krishna in Srimad Bhagavatam 11.11.43

All glories to Sri Guru and Sri Gauranga!

Please accept my sincere and humble obeisances. All glories to Srila Prabhupada!

As a young boy I became a vegetarian due to reading the books of Srila Prabhupada and my association with the devotees. Srila Prabhupada made it so easy to understand why we should not offer or eat meat. His translations made it clear exactly what was to be offered or not and what Lord Sri Krishna’s preference is.

Aside from this consideration we also engaged in cow protection…again, prescribed by our beloved Srila Prabhupada.

My question is, why is do we buy milk from the local supermarket in order to prepare offerings to God? In doing so, we DIRECTLY support an industry which tortures, rapes and kills cows regularly. WE pay for this. This is not the loving exchange exhibited by Lord Sri Krishna. Lord Sri Krishna actually knew the names of all of his cows. They were his pets, friends and playmates. They were loved and cared for daily. They were NOT attached to machines, branded, tortured and killed. They lovingly provided milk and all the nutrients needed merely because of how nicely they were treated.(SEE: “Krishna’s Cows”, below) Why have we not adopted a lifestyle that shuns this torture of Krishna’s most beloved animals?

The temple I support and attend with my family does not keep cows. Neither did the 3 previous temples in the cities I’ve lived in over the last 20+ years. We live in the city, and the temple is not equipped with the proper facility to keep cows. Does this alone make it acceptable to pay the salaries of those torturing killing cows daily? Does this alone make it favorable to give money to the very thing that goes against what Srila Prabhupada called “our one program”?? Again I ask, why have we not adopted a lifestyle that shuns this torture of Krishna’s most beloved animals?

The average life span of a normal cow can be 25 years. A female cow in a dry lot dairy farm reaches collapse in about 6 years. For this reason they are slaughtered at 5 years. After 5 years of overwhelming physical stress it is common for the cows to collapse on their way to the slaughter. These cows are called, “downers”. If downers cannot walk the rest of the way to their own slaughter…they’re dragged to their deaths. WE PAY FOR THIS TO HAPPEN BY BUYING MILK FROM THE LOCAL GROCERY STORES. WE…who sincerely revere names like “GOvinda” and “GOpala” are paying for this. Is this cow protection?

Consider this: half of the calves born on dairy farms are males. These males are considered to be by-products of the dairy industry. These calves are dramatically separated from their mothers after a day or so. (See: Śrīmad Bhāgavatam 1.17.3 purport, below) The mothers (who we, as Vaishnavas consider sacred) are then left to roam the feces-encrusted mud lot, audibly wailing and searching for their lost children. And where are these children so loved by the divine blue cowherd boy of Vrindavan? They are locked inside a 22×54 inch veal crate in order to prevent their muscles from developing so that their meat will be tender. They will never see their mothers again, and will never even turn around or lie down. EVER. When they DO get their chance to walk out of the crate…it’s by the use of painful electric prods (because their muscles have not been allowed to develop)and they are led to the slaughterhouse trucks. WE PAY FOR THIS TO HAPPEN BY BUYING MILK FROM THE LOCAL GROCERY STORES. WE…who sincerely revere names like “GOvinda” and “GOpala” are paying for this. Is this cow protection?

The female cows in dairy production suffer through a process called “freshening”. This means the cows are taken to a device known as the “rape rack” where they are artificially inseminated. In other words, they literally have bull semen forced into them by machine two months after giving birth in order to keep them in a constant, painful state of lactation. Over half of all cows suffer from mastitis, a painful infection of the mammary glands which causes their swollen utters to excrete blood and pus as well as milk. It is an absolute fact that this blood and pus ends up in the dairy products packaged for the stores to sell. We then buy this and offer it to the deities?? WE…who sincerely revere names like “GOvinda” and “GOpala” are paying for this. Is this cow protection? Why have we not adopted a vegan lifestyle that shuns this torture of Krishna’s most beloved animals?

It is 2010. We know full well that cream cheese, ice cream, macaroni and cheese, paneer, kheer, pizza, etc. can all be made deliciously using a variety of plant sources like rice and soy. So why have we not adopted a vegan lifestyle that shuns this torture of Krishna’s most beloved animals? WE…who sincerely revere names like “GOvinda” and “GOpala” are paying for rape, torture and murder. Is this cow protection?

“Of all kinds of gifts, the gift of cows is applauded as the highest. Cows are the foremost of all things. Themselves sacred, they are the best of cleansers and sanctifiers. People should cherish cows for obtaining prosperity and even peace. Cows are said to represent the highest energy both in this world and the world that is above. There is nothing that is more sacred or sanctifying than cows.” From the Mahabharata, Anusasana Parva, Sections LXXXIII – LXXVII – LXXVI

“We have to keep some cows. Never mind we are to take payment from others. That is not cow protection. Cow protection means just like Bhagavan, the Supreme Personality of Godhead, He is tending the cows. He is going, taking the cows personally from His royal palace going to the forest whole day, working there. Is it not, cowherd boy? And taken some little fruit, mother, whatever mother has given. They are playing that. So this is cow protection, not that “Somebody will give money and we shall keep some third class cows and feed there and become cow protector.” We must tend the cows very nicely so that they give us sufficient milk. And with that milk we shall live. SRILA PRABHUPADA, Srimad-Bhagavatam Class 2.9.3 — Melbourne, April 5, 1972

Nanda Maharaja had 900,000 cows. Visvanatha Cakravarti gives this description of the cows of Vrindavana. Krishna knew every cow by name. If any cow was missing Krishna would immediately chase after the missing cow and call her by name. The cows were divided into herds by color, either black, white, red, or yellow. In each color there were 25 further divisions making a total of 100 herds. There were also eight herds of cows that were spotted or speckled or had heads shaped like a mridanga or that had tilak marks on their foreheads. There was a total of 108 different herds of cows. Each of the 108 herds had a herd leader.

“Thus when Krishna calls out, ‘Hey Dhavali’ (the name of a white cow) a whole group of white cows comes forward, and when Krishna calls ‘Hamsi, Candani, Ganga, Mukta’ and so on, the twenty-four other groups of white cows come. The reddish cows are called ‘Aruni, Kunkuma, Sarasvati, etc., the blackish ones ‘Shyamala, Dhumala, Yamuna, etc., and the yellowish ones are Pita, Pingala, Haritaki, etc. (Srimad Bhagavatam 10.35.19 purport)

“As described in the Brahma Samhita (surabhi apbipalayantam), Lord Krishna on His planet, Goloka Vrindavana, engages in tending the surabhi cows. These cows are the Lord’s pet animals.” Srimad Bhagavatam 8.8.2 purport

“But in the Kali-yuga, the calves are separated from the cows as early as possible for purposes which may not be mentioned in these pages of Śrīmad-Bhāgavatam. The cow stands with tears in her eyes, the śūdra milkman draws milk from the cow artificially, and when there is no milk the cow is sent to be slaughtered. These greatly sinful acts are responsible for all the troubles in present society. People do not know what they are doing in the name of economic development. The influence of Kali will keep them in the darkness of ignorance. Despite all endeavors for peace and prosperity, they must try to see the cows and the bulls happy in all respects. Foolish people do not know how one earns happiness by making the cows and bulls happy, but it is a fact by the law of nature.” Śrīmad Bhāgavatam 1.17.3 purport

Well… We Just Got Divorced
The glories of Keli-kadamba