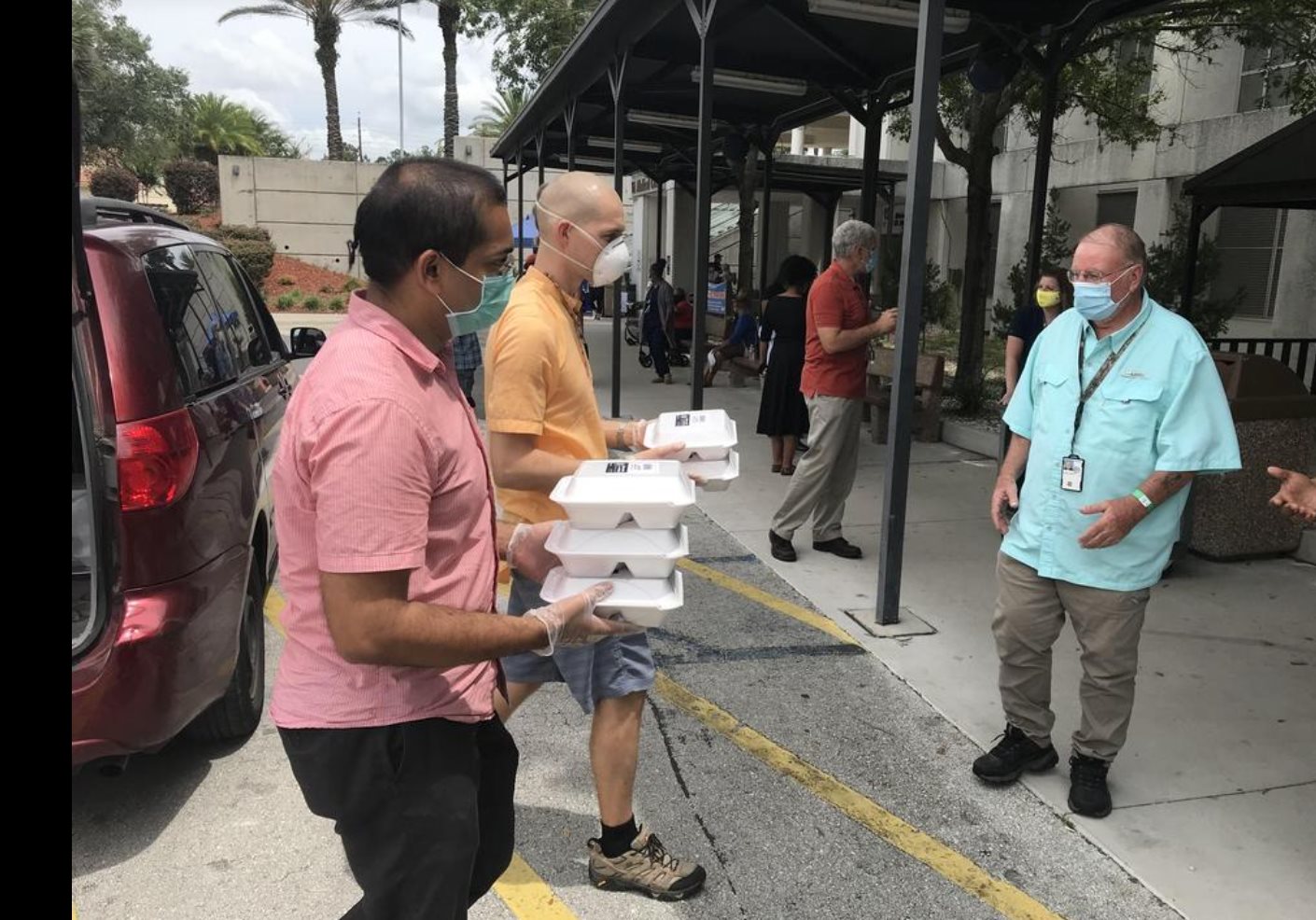 Krishna Lunch has been a staple at the University of Florida (UF) for nearly 40 years but, like many things, coronavirus brought the daily campus tradition to a swift halt. Now, the meals are being distributed to other hungry folk.

Since March 30, Gainesville’s Krishna House has provided over 4,000 free meals to health care workers through their “Healthcare Heroes” program, and they’re starting to feed local low-income families, too.

“When COVID hit and the university shut down, we figured that we wanted to do something for the broader Gainesville community,” said Sruti Sagar Das, president of Krishna House. “So our first thought was ‘let’s share food,’ because that’s what we do and that’s what we’re known for.”

With the Plaza of the Americas devoid of its usual mass of hungry students, Sruti Sagar Das and the Krishna congregation decided to focus their efforts on those they felt would need it the most.

Sruti Sagar Das said that it’s their way of showing support to hospital staff, whether to doctors and nurses or custodians and security guards.

Members of the Krishna House funded the first several deliveries by donating their own money. They later started a GoFundMe page and were able to sustain an average of 100 donated meals every day.

The lunches are prepared and delivered through the efforts of the Krishna House residents and volunteers. Starting at 5:00 a.m., their cook usually spends three hours preparing the daily meals.

Because the preparation and delivery is done entirely by Krishna House members, the primary cost is the food itself.

The GoFundMe page is no longer running, but they’re still accepting donations to the program through https://krishnalunch.com/supportourheroes/

The idea for the “Healthcare Heroes” program came from George Frumkin (Guru Gauranga Das), a member of Gainesville’s Krishna House and a longtime member of the Hare Krishna religious movement.

Frumkin is a disciple of Srila Prabhupada, the founder of the International Society of Krishna Consciousness (ISKCON) also known as the Hare Krishna Movement and served as president of the first Krishna temple in Switzerland. Now, as a retired attorney, he does pro bono legal work for ISKCON.

During the pandemic, Frumkin was forced to isolate from his wife — a trauma ICU nurse who works at UF Health Shands Hospital — due to various health conditions he has.

His awareness of the stress that she and many other nurses faced encouraged him to suggest something.

“Sometimes the last thing they think about is going out for lunch,” he said. “If these health care heroes can’t make it to the cafeteria, or they’re not eating healthy, we’ll bring lunch to them.”

He shared his idea with Krishna House at the beginning of the pandemic, and thousands of hospital workers have enjoyed their meals ever since.

“The service they perform is invaluable, and we want to support them,” Frumkin said. “We do this not because we’re mundane humanitarians but because we’re devotees, because we see that everyone is a part and parcel of God.”

According to Frumkin, Prabhupāda often said that “anyone who lives within five miles of a temple of ours should never go hungry.”

In accordance with this, Sruti Sagar Das and fellow Krishna House residents started knocking on doors in their neighborhood to find low-income families who could also benefit from free lunches.

“We also want to provide lunches to those who were economically hit due to the COVID situation,” said Sruti Sagar Das. Their intent is to provide meals for people who have lost their jobs or are financially struggling because of the pandemic.

This door-to-door campaign was the basis of their newest program, “Krishna Cares,” which provides lunches to low-income families.

The first round of “Krishna Cares” distributions happened on June 1 when four families received free lunches. They’ve delivered lunches to them every day since, and the Krishna House is hoping to find more families in need throughout Gainesville.

All of the lunches are vegetarian and relatively inexpensive. Sruti Sagar Das said they make each meal as an offering to God, whom they call Krishna, in an effort to promote Krishna consciousness, or the practice of doing everything by keeping God at the forefront of their minds.

Krishna House is a part of the Hare Krishna movement, a monotheistic sect of Hinduism. Their goal is to achieve Krishna consciousness in everything they do, be that through chanting, meditating or cooking food.

While cooking and serving lunches is a part of their Krishna consciousness, Sruti Sagar Das said they also serve food as a way to physically and spiritually uplift others.

In the case of the “Healthcare Heroes” and “Krishna Cares” programs, the meals are meant to show compassion and appreciation, too.

“When you go home and your mom cooks food for you, you can feel your mother’s love,” Sruti Sagar Das said. “We’re not doing this for profit but as an offering of love and service to others.”

Kristin Roberts, vice president of support services at SIMED Health, wrote a letter saying that it’s a “morale booster” when the employees feel that others are recognizing their hard work.

Requests to take part in their lunch programs can be made through their website’s order form: krishnalunch.com/cares/