How Shall I Take Shelter of One More Merciful Than He? 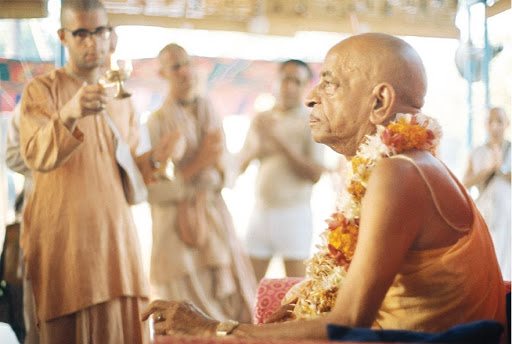 I will read a verse from Srimad-Bhagavatam, Canto Three, Chapter Two, Text 23. This verse is very significant. Not only is the verse beautiful, but it also has historical significance, because when Sukadeva Gosvami came out of the womb, after sixteen years, he left home immediately, and his father, Srila Vyasadeva, followed him into the forest. And when he came close enough to him, he recited two verses from Srimad-Bhagavatam, one describing Krishna’s beauty, from the Tenth Canto, and one describing Krishna’s mercy, which is this verse.

Alas, how shall I take shelter of one more merciful than He who granted the position of mother to a she-demon [Putana] although she was unfaithful and she prepared deadly poison to be sucked from her breast?

Here is an example of the extreme mercy of the Lord, even to His enemy. It is said that a noble man accepts the good qualities of a person of doubtful character, just as one accepts nectar from a stock of poison.

The Lord is absolute. He is all good for everyone, and He is neutral toward everyone. He is always thinking of how to do good for others. So even if one approaches Him as an enemy, He will try to do good for the person, as was the case with Putana. Although she came to kill Him by administering poison from her breast, He elevated her to the position of a nurse, like a mother, in the spiritual world.

In His babyhood, the Lord was administered deadly poison by Putana, a she-demon who tried to kill the wonderful baby. And because she was a demon, it was impossible for her to know that the Supreme Lord, even though playing the part of a baby, was no one less than the Supreme Personality of Godhead.

On the occasion of the wedding of Vasudeva and Devaki, Kamsa, who was Devaki’s brother, was driving their chariot, and he heard a voice from the sky (akasa-vani) saying that the eighth son of Devaki would kill him. And he was so selfish and egoistic and demonic that he didn’t wait for the eighth child; he killed all the sons of Devaki, one by one. Then, eventually, Krishna appeared, and He manifested His four-handed form of Vishnu to convince them that He was the Supreme Personality of Godhead. But still, out of parental affection, they were afraid for Him, and thus Vasudeva carried Krishna to Vrindavan.

Kamsa sent many demons to Vrindavan to kill Krishna, and Putana was one of them. And it is described in Srimad-Bhagavatam that when sucking Putana’s breast, He sucked out her life air. It is also described that He closed His eyes, and commentators explain that He closed His eyes because He didn’t want to look at her because although she was a demon, she was a woman who appeared to be showing motherly affection.

And because she was a demon, it was impossible for her to know that the Supreme Lord, even though playing the part of a baby, was no one less than the same Supreme Personality of Godhead. His value as the Supreme Lord did not diminish upon His becoming a baby to please His devotee Yasoda. The Lord may assume the form of a baby or a shape other than that of a human being, but it doesn’t make the slightest difference; He is always the same Supreme. A living creature, however powerful he may become by dint of severe penance, can never become equal to the Supreme Lord.

Lord Krsna accepted the motherhood of Putana because she pretended to be an affectionate mother, allowing Krsna to suck her breast. The Lord accepts the least qualification of the living entity and awards him the highest reward. That is the standard of His character. Therefore, who but the Lord can be the ultimate shelter?

When Srila Prabhupada was in Bombay he received a phone call from the temple president in Calcutta, who reported that one of Prabhupada’s earliest disciples from America had come to Calcutta and was smoking ganja, marijuana, and asked what to do. Prabhupada told his secretary to relay his response: “Tell him that if he doesn’t stop smoking ganja I will reject him.” Afterwards, Tamal Krishna Goswami asked, “Is it true that if he doesn’t stop smoking ganja you will reject him?” And Prabhupada said, “No—I cannot reject anyone. The mercy of Lord Nityananda has no limit.”

Then maybe two years later, we were in Juhu, and Srila Prabhupada had a disciple who fell into bad company and was living on Juhu Beach and doing yogic tricks. He was doing things like putting a penny or paisa in his ear and then making it come out somewhere else—different strange things to collect money—and he was known as a disciple of Prabhupada and a member of ISKCON. So, Tamal Krishna Goswami approached Srila Prabhupada and said, “This is happening, and he is giving you a bad name and giving ISKCON a bad name. You should reject him.” And again Srila Prabhupada replied, “I cannot reject anyone.” Tamal Krishna Goswami asked, “But don’t you have to draw the line somewhere?” And again Srila Prabhupada said, “The mercy of Lord Nityananda has no limits.”

How shall I take shelter of one more merciful than he—Srila Prabhupada?

Another related quality of Srila Prabhupada’s is that he was always willing to give someone a chance. Around 1976, a strange person with a PhD came to the Juhu temple and said he wanted to join, and Srila Prabhupada invited him to stay upstairs with him. At that time there were six tenement buildings, which came with the Juhu land, and Srila Prabhupada had us build an additional floor on the top of each of those six buildings (though in the end we added an additional floor on only five of the six). In the bigger buildings each floor had two apartments, and in Srila Prabhupada’s building he had one side for himself and the other side for his personal staff. So, he let this sort of strange character stay upstairs with his personal staff next door to his own quarters. And Prabhupada was spending quite a bit of time with him. Hamsaduta Prabhu was visiting at the time, and he told Srila Prabhupada, “Prabhupada, you are just wasting your time with this man. He is never going to amount to anything.” But Prabhupada kept spending time with him. And in the end, the man left; he never did amount to anything. But when Hamsaduta mentioned that to Srila Prabhupada—“I could see that he never was going to amount to anything”—Prabhupada replied, “I wanted to give him a chance.”

Another person whom Srila Prabhupada encouraged was Dr. C. P. Patel, who would almost always accompany him on his morning walks on Juhu Beach. They had a friendly relationship, but Dr. Patel would sometimes speak like a Mayavadi. Prabhupada would accuse him, “You are a Mayavadi!” and Dr. Patel would reply, “No sir, I am a Vaishnava, a pure Vaishnava.”

Back at Hare Krishna Land, Tamal Krishna Goswami approached Srila Prabhupada in his room and asked him, “What is Dr. Patel’s position? Is he a Vaishnava or a Mayavadi, an impersonalist?”

In response, Prabhupada told a story about a man who could speak many languages. In whatever language people addressed him, he could respond fluently. No one could figure out where the man was actually from.

After much discussion, a neighbor said, “I will find out.” So, one day, when the man was preoccupied, the neighbor came up behind him and gave him a big whack. And when the man started to curse in his native tongue, his origin was disclosed.

“Dr. Patel is like that,” Prabhupada said. “He can speak very expertly. He can sound like a devotee, sound like a Vaishnava, sound like a Mayavadi, sound like anything. But when I gave a slap where it really hurt—this so-called saintly person that he revered—his real language came out.”

“So, why do you put up with him?” Tamal Krishna asked. “He is so offensive.”

“It is our duty to engage everyone,” Prabhupada said. He wanted to give Dr. Patel a chance. And as the years passed, Dr. Patel developed great affection for Srila Prabhupada and after Prabhupada left this world wrote a beautiful article for Back to Godhead about his relationship with him. The article was titled “My Life’s Most Precious Moments,” with the subtitle “A Bombay doctor wins the title ‘big fool’ and loves it”—because Prabhupada would always call Dr. Patel a mudha. He would say, “I am not saying—Krishna is saying: na mam duskrtino mudhah.” Anyone who doesn’t surrender to Krishna is a mudha, fool.

So, how shall I take shelter of one more merciful than he? Srila Prabhupada had so many wonderful qualities, but his most important quality, for us especially, was his extreme mercifulness.

One day some years later, Bhogilal Patel came to meet Srila Prabhupada at Prabhupada’s flat at the back of Hare Krishna Land. I had a close relationship with Seth Bhogilal, so I brought him up to meet Prabhupada. They were talking and, as is natural in a conversation, when Prabhupada was speaking, I would look at him, and when Bhogilal was speaking, I would look at him. But at one stage, while Bhogilal was speaking, I looked at Srila Prabhupada, which Prabhupada wasn’t expecting, and he was looking at me with such love and affection, like a father or a grandfather. By age, Srila Prabhupada was more like a grandfather. I was surprised that he was looking at me with so much love. But as soon as Srila Prabhupada saw me look at him, he changed his expression and became very grave and serious. I think it was some special mercy that I got a glimpse of how much love he had for us, which he didn’t usually show very openly. His love for us was manifest in his care for us and his giving us the knowledge of Krishna consciousness and engaging us in Krishna’s service.

Srila Prabhupada was very reserved about touching people, including even disciples. In 1971 in Gorakhpur, as guests of Hanuman Prasad Poddar of Gita Press, we were staying in his large estate, Sri Krishna Niketan, which had previously been his personal residence.

Srila Prabhupada was traveling with his small Radha-Krishna Deities, and he wanted to establish an altar for Them in Sri Krishna Niketan. He wanted some foliage for the altar, so he sent a couple of devotees, including me, to collect some. I went out to a thicket and was collecting branches with leaves. I wasn’t tearing them live; I was looking for branches and leaves that had fallen. I just kept going deeper into the woods and collecting more and more foliage, and eventually I had a huge bundle, as much as I could possibly carry.

So, I was lugging the bundle up the stairs, and when I reached the temple room, Srila Prabhupada was there and the altar was being set up. I just dropped the bundle on the floor and offered my obeisances. And while I was on the floor, Prabhupada patted me on the back. It was one of the only times—maybe the only time—that he physically touched me. I looked up, and he was smiling broadly. I didn’t know if he even needed any more foliage, but he was pleased by my effort.

Now I ask you: How shall I take shelter of one more merciful than he?

[A talk by Giriraj Swami on Srimad-Bhagavatam 3.2.23, May 21, 2020, by Zoom with UAE.]
50 years of Chanting at the Glastonbury Music Festival!
Back to Godhead in Turkish Language