My personal appreciation of the wonderful Bhakti Charu Maharaja 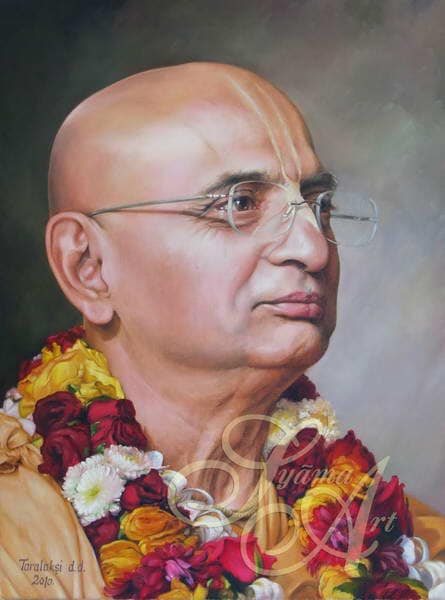 So, so much wishing I was paying my obeisances to you in person, then giving you a big hug and then discussing the glories of Srila Prabhupada with you. There was no way anyone in your sweet company could fail to be immediately immersed in the transcendental pastimes of His Divine Grace once with you for a minute or two

As a young man you left Bengal and by Krishna’s arrangement came in contact with Srila Prabhupada’s mission thousands of miles away, via his book ‘The Nectar of Devotion’ and immediately accepted Srila Prabhupada as your spiritual master. Thus began your service to your dearly beloved spiritual master which has continued to this very day and will now go on eternally.

Then just a few months on from your first meeting with ISKCON’s Founder Acarya, he awarded you both first and second initiation at the Gaura Purnima festival of 1977 and within no time at all after that you were awarded sannyasa. What extraordinary events they were, unique in ISKCON and such a clear and obvious indication that Srila Prabhupada saw in you something equally extraordinary. No doubt he saw many of your sublime qualities, not least your all attractive purity. 43 years on Srila Prabhupada’s decision has been unequivocally vindicated and we have all been the beneficiaries of his wisdom.

Your contribution to ISKCON has been second to none and this tribute to you would be too lengthy if I were to list them all but let me mention a few.

You have been travelling and preaching for over 43 years now and have inspired so many across the globe. You translated Srila Prabhupada’s books into Bengali as he requested, completing that service in1996, Srila Prabhupada’s centennial year.

Subsequently you were the inspiration and directly involved in writing, directing and producing the Abhay Charan films which were broadcast on National television in India. That production depicted the glorious life and extraordinary achievements of Srila Prabhupada.

You have given thousands of lectures and seminars over the decades and completed a wonderful book, ‘Ocean of Mercy’, allowing everyone to enter into your unique association with Srila Prabhupada. In recent years you have created from scratch, with the help of your dedicated followers, a wonderful project in Ujjain where all aspects of the ISKCON mission are present and in rude health. Even more recently you have started a project to protect Lord Krishna’s old and neglected cows in the US. All of your efforts over many, many years create a vivid picture of your boundless energy &amp; enthusiasm, vision, purity and most of all, your unflinching faith and dedication to His Divine Grace

As I say so much more could be said on all you have done in service to Guru and Krishna but let me finish by saying how kind, generous and loving you have also been to me for many decades. All that love and kindness has been showered on me without any expectation of something in return. It is that selflessness that makes you for me, the sweetest person I have ever known. That sweetness was also present for all to see and hear in your most devotional and ambrosial singing of the Hare Krishna mantra

I cannot finish by not mentioning all the wonderful times we honoured prasadam together, both just the two of us as well as

with sometimes dozens of other devotees. My memories of those experiences are that they were a replica of what must take place in the spiritual world.

Thank you so, so much Maharaja and I so much look forward to having your association sometime in the future and I will pray to Srila Prabhupada and Lord Krishna to allow me that wonderful mercy again. Until then I will miss you dearly

Your servant, friend and admirer,

Condolences on the Departure of Sripada BV Narayana Maharaja