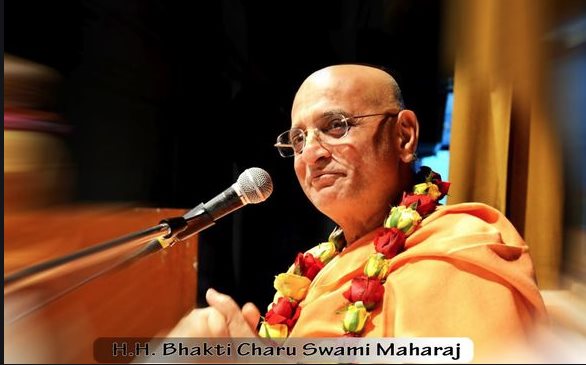 May Srila Prabhupada shower his blessings on you. All glories to His Divine Grace.

We’ve just lost one of ISKCON’s most important leaders, His Holiness Bhakti Charu Swami, who succumbed to Covid19 and the complications it brought on. He departed on the auspicious day of guru-purnima, which is also the disappearance day of Srila Sanatana Gosvami, a befitting day for one who relished sharing his realizations of Sri Brhad-bhagavatamrta, even before the BBT published Gopiparandhana Prabhu’s translation. Such was his profound knowledge of sastra.

HH Bhakti Charu Swami was a symbol of encouragement to everyone and a perfect example of how to co-operate together in the mood of his eternal spiritual father and friend, His Divine Grace A.C. Bhaktivedanta Swami Prabhupada.

Maharaja spread Krsna consciousness on a level that is rare in the history of Vaisnavism. The innovative projects he spearheaded and completed are too numerous to count. But most importantly he was genuinely affectionate to everyone he met. I first met him in 1977 during the Mayapur meetings and festival. I don’t remember if it was his first meeting with Srila Prabhupada, but I’ve always remembered and relished the powerful first impression I received with the first long, warm embrace of many to come from this elevated soul.

I watched Maharaja serve Srila Prabhupada with such tender affection later that year during the last month of Srila Prabhupada’s transcendental pastimes. Maharaja was at once an intimate disciple. Everyone could see that as Srila Prabhupada gave him first second initiation at once and shortly after sannyasa initiation, in rapid order, perhaps the most rapid of all his disciples.

We who have borne the separation of Srila Prabhupada for almost 43 years pour out our love and affection to all of Maharaja’s disciples in their grief, a grief which is not fully comprehensible to any but those who have lost their eternal spiritual masters. I vow to help you in any way I can bear the grief you are now forced to bear.

But we should all cling to the essential point Srila Bhakti Charu Maharaja repeatedly stressed: That Srila Prabhupada is the Founder / Acarya of ISKCON for as long as it exists. By keeping Srila Prabhupada in the center, especially by keeping his books in the center, constantly reading and distributing them to others, we will preserve Maharaja’s instructions and legacy in the best possible way and help him help Srila Prabhupada keep his movement together.

Let us all follow in Srila Bhakti Charu Swami’s footsteps by staying in ISKCON, come what may, and honor the special undying loyalty Maharaja had for Srila Prabhupada’s spiritual family, which is, as His Divine Grace writes, “Our International Society for Krishna Consciousness is one of the branches of the Caitanya tree.”