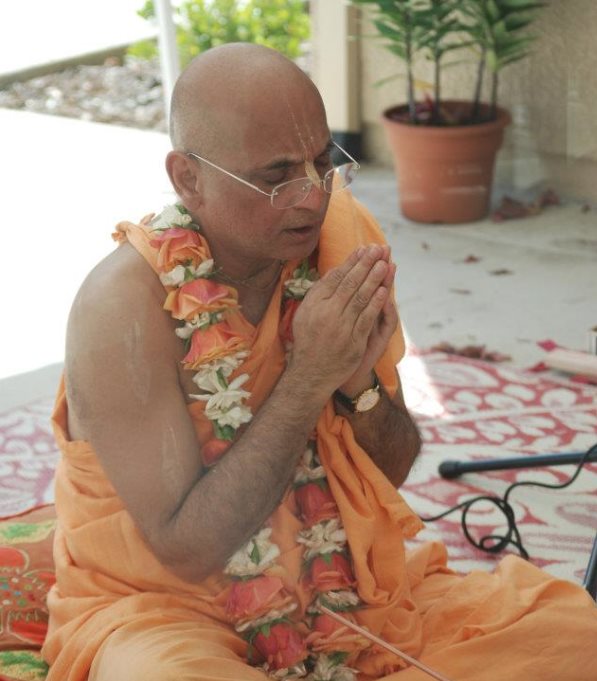 Somehow, by Lord Krishna’s too-great-to-understand plan, He has decided to so suddenly promote His selfless servant Bhakti Charu Swami into His eternal Abode.
That such a stalwart true servant of the Lord, such a rare beautiful soul has too suddenly departed leaves us all choked with sorrow at such a great loss to our world-wide ISKCON sangha.

Srila Prabhupada spent his entire life’s energy to give Krishna to the whole world; and in so doing he also created so many empowered saints, men and women of such pure hearts and saintly characters. Bhakti Charu Maharaj is such an exemplary saintly son, the ideal disciple and perfect follower of Srila Prabhupada. Having given his whole heart to Srila Prabhupada’s mission, he was thus blessed with so many of Srila Prabhupada’s pure qualities: his deep compassion, his constant selflessness, his humble dedication to the spiritual upliftment of everyone.

I was somehow also blessed with Maharaj’s uniquely personal sweet friendship. He was always eager to share his warm and genuine affection with me (as with so many others). In his positive presence, I always felt rejuvenated and inspired to do better in serving the Sankirtan Movement. Such is the quality of a pure devotee like Maharaj: to inspire by his example and practical wisdom. His contributions to Srila Prabhupada’s mission are so substantial that historically he will surely be honored as one of his most effective and exemplary disciples.

Let us all bow down in front of such a mahatma, and pray to keep within our hearts his glorious legacy of a life made perfect by unconditional surrender to Guru and Krishna.

All Glories to Bhakti Charu Maharaj!

All Glories to Srila Prabhupada!

Bombay HC declares ‘ISKCON’ is a well-known trademark
Farewell my dear, dear friend. I aspire to meet you again at the lotus feet of our Srila Prabhupada

A fortunate recipient of a Srimad Bhagavatam set during Bhadra…