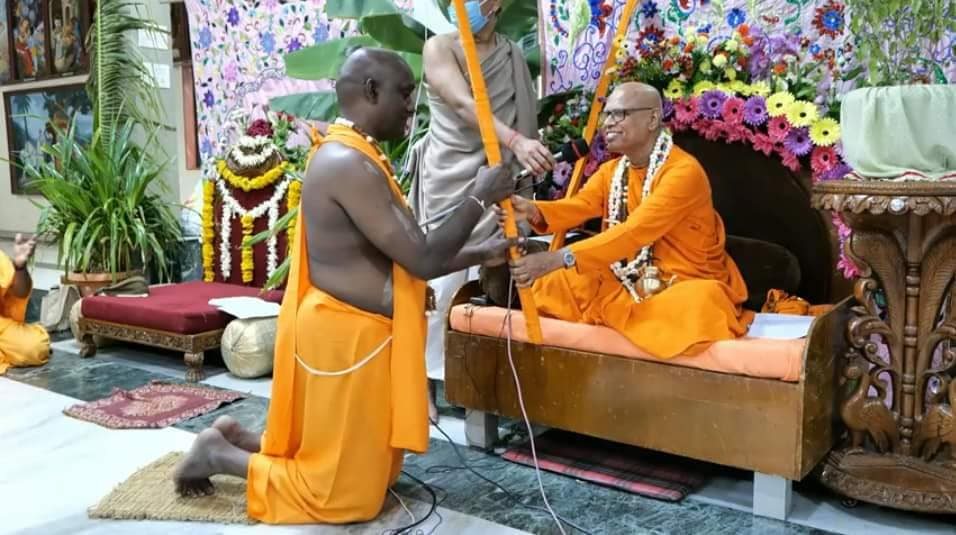 Today, on the auspicious day of Kamika Ekadasi, HG Sundaralal Prabhu was awarded sannyasa by HH Lokanath Swami Maharaja and was given the name Sundara Caitanya Goswami Maharaja.

Today is also the day to shower an abundance of blessings and well-wishers on HH Sundara Caitanya Goswami Maharaja.

About HH Sundara Caitanya Goswami Maharaja
HG Sundaralal Prabhu was born as Sanjay Sathyanand Nunkoo on 17 September 1965 in Mauritius, the day Srila Prabhupada arrived in America. He is the fourth of six children of Parsad and Shanti Nunkoo. Sundaralal Prabhu attended Bambous Government School and his secondary education was at Patten College, Quatre Bornes.

It is in Mauritius that he came into contact with ISKCON in 1982 at the very young age of 17 and later dedicated his life to the mission. By 1986 he was a full time devotee, a brahmachari, in Mahebourg Preaching Centre. He mostly preached in the South region of the island. His mother departed when Prabhu was 18 years old. His family was not in favour of him joining the temple full time.

He was initiated in 1990 by HH Lokanath Swami at Sri Sri Radha Golokananda Mandir Phoenix, Mauritius and was among the first devotees to take diksa in that mandir. Prabhu and his eldest, brother HG Vrsabhanu Prabhu took diksa together. Sundaralal Prabhu’s father, late HG Arjuna Das Prabhu also became a disciple of Lokanath Swami in 2005 and now the whole family are devotees.

He is an inspirational coordinator of various international level festivals in Mauritius. He is instrumental in providing the teachings of Srimad Bhagavatam and Bhagavad-Gita. Sundaralal Prabhu is the mentor of mostly all the youngsters on the island. His workshops and seminars are specially appreciated in Asia, South-Africa and Europe. His Grace Sundaralal Prabhu is an international motivational speaker, leadership trainer and a renowned youth preacher. He specialises in spiriting and empowering people to realize their true selves. As a keynote speaker, thousands of people have discovered a new light from his energetic workshops worldwide. He visits Europe and conducts the sessions through different districts of Maharashtra.

How to propagate spiritual knowledge throughout the whole world? (video)
2. Why and how to erect the places of transcendental pastimes of the Lord? (video)