A Struggle against Superior Arrangement 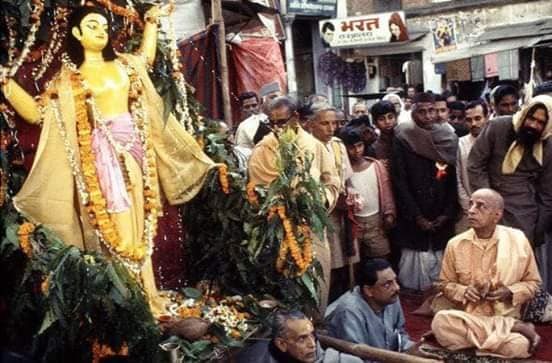 This is one of many stories told by Harisauri dasa who was Srila Prabhupada’s personal servant for a number of years back in the 70’s:

As I laid out the straw mat on the sunlit veranda to prepare for his massage, Srila Prabhupada drew my attention to some sparrows making a nest. They had chosen a hole in the wall behind the electrical circuit box just outside Prabhupada’s sitting-room window. He said that their chirping disturbed him at night while translating his books. So before they could build a complete nest and settle in, I removed the bits of strew they had gathered.

But as I began the massage one of the birds returned and started to rebuild the nest, flying back and forth with small pieces of strew. I crumpled some paper and stuffed it into the hole to block it.

So when the sparrow came back and found its access barred, it pecked, undaunted, at the paper for almost half an hour, trying to open up the hole to continue its home-making. When the bird found this too difficult, it flew off and returned with its mate. Together they worked hard to remove the paper, eventually succeeding. By pecking and tugging in unison, they removed the paper and began to build again. All the while Srila Prabhupada watched them without comment.

When the birds flew away to get more strew, I again filled the hole with the paper, this time forcing it in so tight that the sparrows couldn’t possibly remove it. The sparrows returned and spent a long time to regain access, but this time were unsuccessful. Eventually they accepted defeat, gave up, and left.

Prabhupada then drew an interesting parallel. He told me that even though the birds had eyes, they could not see. Although they were trying so hard to build their house, they couldn’t see that the person who was preventing them was standing nearby watching. So they continued on in ignorance trying to make adjustments, struggling against a superior arrangement.

He explained how in the same way, materialistic persons, although having eyes, are unable to see how the illusory energy is supervising all their efforts. They simply struggle on, making adjustments, hoping to improve their lives and secure their place in the material world, not understanding that maya is watching their every move and defeating them at every step.

A Most Sacred Tree (Album of photos)