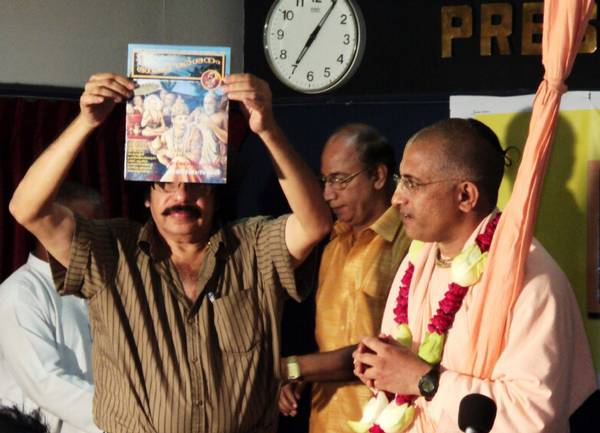 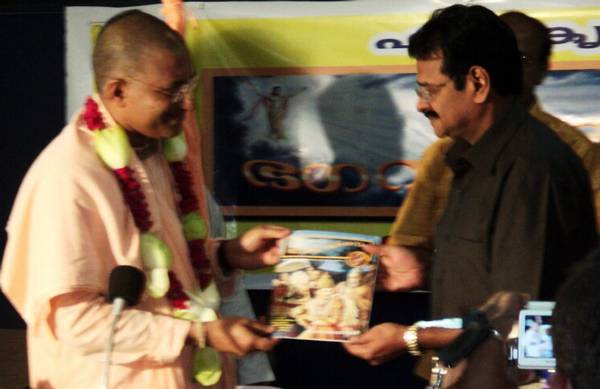 Back To Godhead in God’s Own Country!

Thiruvananthapuram, July 31: “Bhagavad Darshanam”, the Malayalam version of Back to Godhead (BTG) magazine, was released to the public today in a glittering function held in Thiruvananthapuram, capital of the southern Indian state of Kerala. Sri Soorya Krishnamurthy, artist and cine personality performed the release of the magazine. The first copy of Bhagavad Darshanam was received by Sri Rajagopal, Principal, Police Training College, from HH Bhakti Vinoda Swami, Zonal Secretary, ISKCON Kerala.

HG Jagat Sakshi dasa brahmachari, President of ISKCON Thiruvananthapuram delivered the welcome address. Sketching a short profile of the Bhaktivedanta Book Trust (BBT), which publishes books in 80+ languages including Arabic and Russian, he noted that all this had its roots in the first BTG started by the sincere efforts of His Divine Grace A. C. Bhaktivedanta Swami Prabhupada.

Delivering the Presidential speech on the occasion, H H Bhakti Vinoda Swami Maharaj, who also oversees BBT operations in Kerala, emotionally described how the BTG magazine founded by Srila Prabhupada in 1944 is finally, crossing numerous hurdles, coming up in Malayalam language after 66 years. Maharaja expressed great confidence that Srila Prabhupada’s books can offer, like no other, the perfect satiation for the intellectual thirst of Kerala’s educated populace. Kerala’s tourism department calls the state ‘God’s Own Country’. Therefore, among the multitude of magazines doing the rounds in Kerala, Maharaja said that BTG will stand out: it will help the people of God’s Own Country go Back to Godhead. Bhagavad Darshanam is not a mundane magazine reporting mundane news, it is meant to help people understand, relate to and enter into the reality of spiritual world. Calling on the eagerness of Keralites to welcome anything new and different, Bhakti Vinoda Swami requested all Keralites to wholeheartedly welcome this unique magazine.

Chief Guest Sri Soorya Krishnamoorthy described that the ISKCON movement is the modern day example of the Vedic mantra ‘lokah samastah sukhino bhavantu’. He quoted from his own experiences while visiting ISKCON’s Juhu centre: he could sense that the devotees’ prayers were never for just their own or their institution’s benefit, it was for the benefit of the whole world. Taking a cue from Bhakti Vinoda Swami’s remark on Keralites’ eagerness to welcome something new, Sri Soorya Krishnamoorthy assured everyone that God’s own country will most eagerly welcome the Hare Krishna Movement and its magazine, Back to Godhead.

Kerala: a small state tucked away in the southwest corner of India is famous as ‘the 100% literate state’. Also the birthplace of Sripada Sankaracarya, the people here have a never-say-die appetite for reading and philosophizing; you can express friendship to another by sharing any printed matter! Needless to say, the state is a deluge of print and media activity. BBT Kerala is most hopeful that the avid readers of this intellectual state will experience a new wave of spiritual resurgence when the most coherent philosophy presented by Srila Prabhupada reaches their homes in the form of Bhagavad Darshanam. 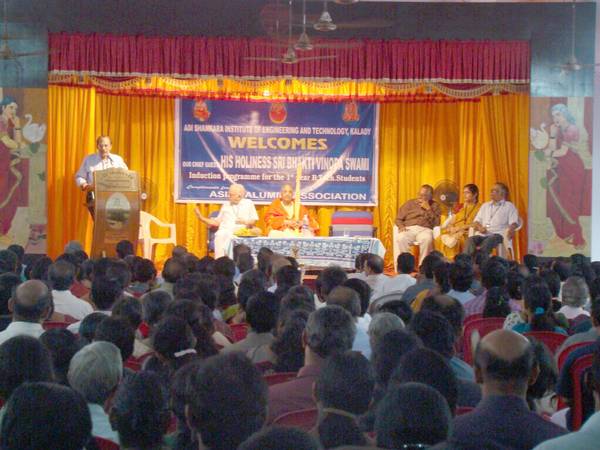 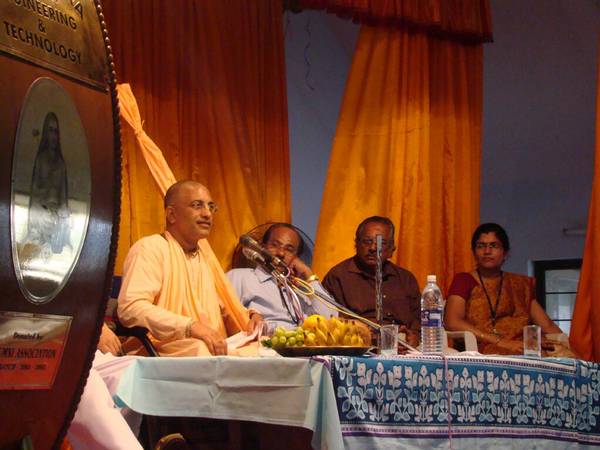 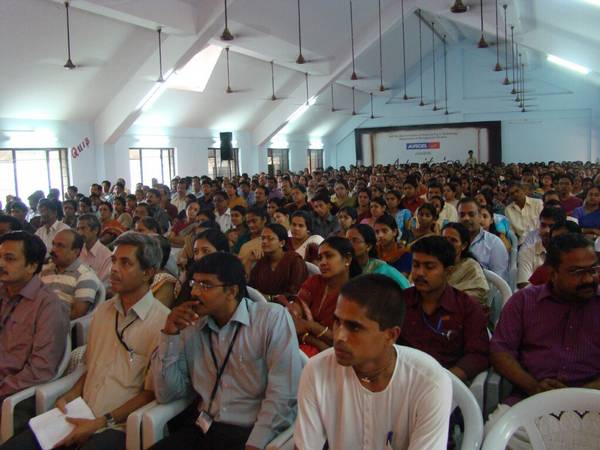 Hammering the illusion of modern education July 28, 2010: Kalady is the birth place of Sripada Shankaracharya who blazed an intellectual and spiritual trail from this humble hamlet and toured the holy land of Bharata desa with the clarion call for bursting the illusory bubble of material existence. The place got its name after young Shankara drew the holy Periyar river closer with his heel to cater to the need of his mother. This is also the place where the sannyasi Shankaracharya set his dead mother’s body to flames using raw banana trunks after facing criticism and opposition from locals. Located right on the banks of Periyar river, Sripada Shankaracharya’s birth site also houses a very beautiful Krishna temple personally installed by him. The trustees of the birth site run several educational institutions widely known for their academic success. HH Bhakti Vinoda Swami was invited as the Chief Guest to address more than 1000 parents, faculty, trustees and students who had assembled at Adi Sankara Institute of Engineering & Technology to start their engineering career in this sacred land. Kalady is located close to the famous city of Kochi (Cochin) where Srila Prabhupada, during his epic voyage to the USA, set his lotus feet to receive his Bhagavatam volumes onboard on to the Jaladuta. After a warm reception and welcome and after the report of the Principal and trustees, HH Bhakti Vinoda Swami expressed his happiness in being called to this historic location of Sripada Shankaracharya who wrote and spoke strongly against materialism. His Bhaja Govindam song, titled ‘Moha Mudgara’ (the hammer that breaks illusion), is the substance of all spiritual education. Differentiating matter from spirit and denouncing the falsity of material life, the acharya scientifically proclaims the superiority of spirit and the self. Modern education lacks this essential ingredient and is rendered useless and is therefore producing weak individuals. Srila Prabhupada often asked this question when he visited reputed colleges and universities all over the world: “Where is your department for study of the self – spirit soul? ”

Bhakti Vinoda Swami urged the institute and the students along with parents to imbibe the real teachings of Shankara as expressed in his Bhaja Govindam song and cultivate spiritual knowhow in parallel to their material education. Maharaja quoted Srila Prabhupada extensively with many anecdotes and requested that the institute situated in the heart of Shankara’s bastion stand out unique by imparting this knowledge from the books of His Divine Grace A. C. Bhaktivedanta Swami Prabhupada. At the end of the session the trustees enquired about the books of Srila Prabhupada for their library and requested Maharaja to visit again and consider conducting sessions for the students from Srimad Bhagavad Gita.