Are those the books of A. C. Bhaktivedanta Swami Prabhupada? 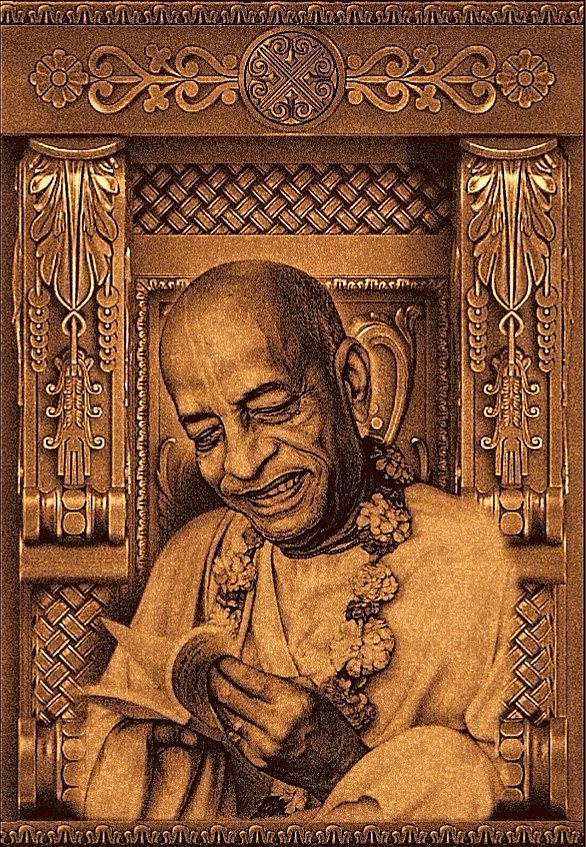 This book distribution story needs a little background. It’s like many stories from so many devotees all over the world, which give us a sense of the unexplainable magic of book distribution.

Those deeply mystical points in time, those strange moments, when synchronicity only gives a vague explanation for what just happened. Points in time when you just know deep down in your soul that Paramatma, the Supersoul, is actually the person doing everything. He is in the heart of the distributor, He is in the heart of the receiver, and He is in control of the whole environment.

The transcendental Books of Srila Prabhupada working in unison with Paramatma are doing it all, and we as sankirtan devotees are blessed with being in that wonderful position of observing and even taking the credit! Although we know deep down we are not doing any thing.

It was in May 1994. I was having a particular health issue, and it had being going on for some years off and on, and no conventional treatment had been helping. So a couple of good devotee friends suggested I visit a disciple of Srila Prabhupada who had recently arrived in the UK. A wonderful devotee who apart from many other talents and devotional qualities is a great Jyotish astrologer. It was thought that I might be able to get some other perspectives and maybe then some ideas on how to find a remedy or treatment.

I agreed. And as a young brahmacari I was quite excited about meeting firstly a senior American Prabhupada disciple and an astrologer to boot! In those days I rarely took a day off from book distribution. In those days that just wasnt the mood. You would need to be dying to not go out on the street. Therefore I took a sankirtan car, puts some boxes of books in the back, and set off.

I was driving from Bhaktivedanta Manor over to Brentwood in Essex. Not much more than an hour’s drive. A small town and one in which I had never distributed before.

I arrived, had my meeting with the wonderful prabhu (and that is a whole other story) and left his venue and decided rather than waste time driving to a town I knew, I would just drive into the town center here and get straight out onto the street and see if I could salvage something of what was left of the day. Basically I had a big ego and wanted to keep my fellow distributors on their toes, ha ha. In case they thought I had taken the day off and wouldn’t be turning in any results today. Ecstatic competition was fierce back then.

I got to the street, and though the people were lovely and receptive there just weren’t enough people. It was so quiet. I was getting a bit despondent. It was getting late. Less and less people were around.

I started to pray to Lord Nityananda as almost always I did in such situations. Situations when you know miracles can happen if you could just get out of their way and let them happen. This is after all is the Yuga Dharma, so why can’t something miraculous happen even if I am an insignificant fool? Why can’t a miracle happen? Maybe the street will suddenly fill up with loads of pious people, or one person will come along and buy 100s of books! Why not?

I prayed, “My dear Lord Nityananda, I am here, the books are here, please let something wonderful happen. It is not difficult for You at all to send someone or to create an amazing and merciful situation”

For a few minutes I prayed like that. And one or two people passed by and bought a book or two, but time was running out and I was still waiting for some bigger mercy.

Then! All of a sudden from the corner of my eye I saw a young man approaching me carrying some sheets of paper in his hands. After a moment or two I realised he was walking to me specifically, and I heard his voice saying softly, “Excuse me, excuse me.”

I turned fully to meet his gaze and said, “Hi, how’s it going?”

And he just said in a fixed tone, “Are those the books of A. C. Bhaktivedanta Swami Prabhupada?”

It took me a couple of seconds to register and process what I had just heard. It caught me off guard, and so my usual distributor mind just didn’t kick in.

He was amazed. He said, “I live in the south of France on work, and am just back in England for a few days, and I only had time to come to this town today and have never been here before. I have been going around to all the bookshops, asking whether they have any of the books on these lists I have here, but none of them do. Actually they haven’t even heard of them.”

He then showed me the list of books he had printed on those sheets of paper. It was all the books of Prabhupada!!

He put the sheets in my hand and asked, “Do you have any of these?”

I practically laughed out loud and said, “Well, I have some of them with me here now, and I can get you all of them later if you want.”

He and I were both laughing, and he explained that he had received the biography of Srila Prabhupada more than a year before in an airport in the USA. And he had only got round to reading it recently, and he had decided next time he was in England he would try to find the actual books by Srila Prabhupada.

There are so many other details to this story but it is hard for me put it all down here now.

In the end he bought all the books he could from me then and there on the street, and we then met at the temple for the Sunday Program a couple of days later, where he then bought full sets of Srimad Bhagavatam and Caitanya Caritamrta and some other books. Practically speaking he bought the complete works of Srila Prabhupada for himself, his girlfriend, and other family members. We kept in touch for a while, his girlfriend attended the Rathayatra festival, and a few other festivals and then we all lost touch.

But he was one of Lord Nityananda’s miracles of mercy. And I was blessed to be a part of that.

Keisha Castle-Hughes and her Hollywood team gets the mercy!…

Hare Krishna Lunch: Govinda is Feeding the Soul of Brooklyn