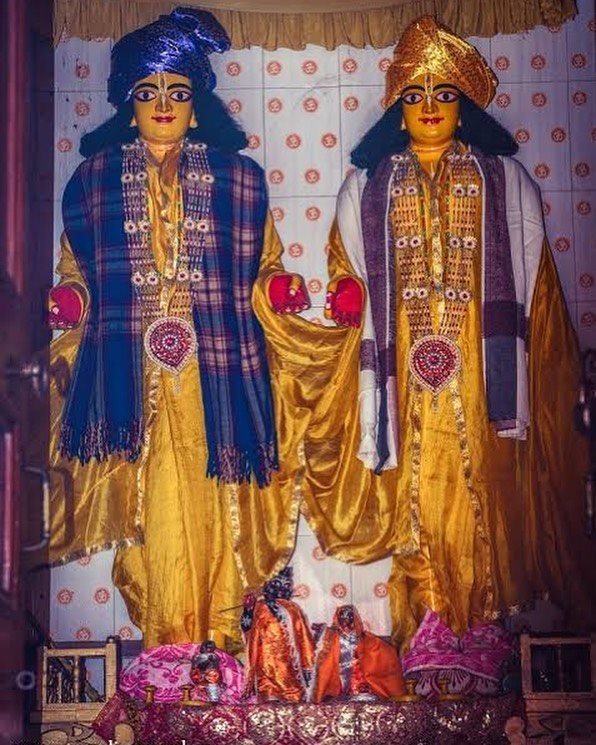 Tradition reveals that Sri Sri Gaur-Nitai Themselves came to Ambika Kalna to pose for the deities that are to this day housed in the little temple. Pilgrims may also see Bhagavad-gita on palm-leaf there—verses that are said to have been written by Mahaprabhu’s own hand; the oar with which Mahaprabhu rowed to Kalna is still enshrined in that temple; and the tamarind tree still stands, under which Gauridas and Mahaprabhu are said to have discussed Vaishnava philosophy.

The Deities of Gaur-Nitai are made from pure neem wood, and, as it is said, bear an uncanny resemblance to Mahaprabhu and Nityananda. Once, while worshipping the Deities at Ambika Kalna, Gauridas observed the energetic kirtan that was raging around him. As the pujari [presiding priest], he could not participate but had to instead serve the Deities by offering the aratik ceremony of standard items with a steady hand. Chaitanya Mahaprabhu and Nityananda Prbhu were in the kirtan, and when it reached its climax, the Gaur-Nitai murtis on the altar, which were identical to Them, jumped off and joined the ecstatic singing and dancing.

There were now two Gaur-Nitai in the kirtan! Gauridas jumped in after Them, chasing Them with a stick. They became so afraid that one set of Gaur-Nitai (or according to some sources only Gauranga Mahaprabhu) leaped into Hridayananda’s heart; the other set sprang back onto the altar. From this point on, Hridayananda came to be known as Hridoy Chaitanya, for Mahaprabhu had frantically danced into his heart [“hridoy”].

The best cooking show ever! With Radha Ickrath (video)

Are all religions equal? Question. I have been pondering the…