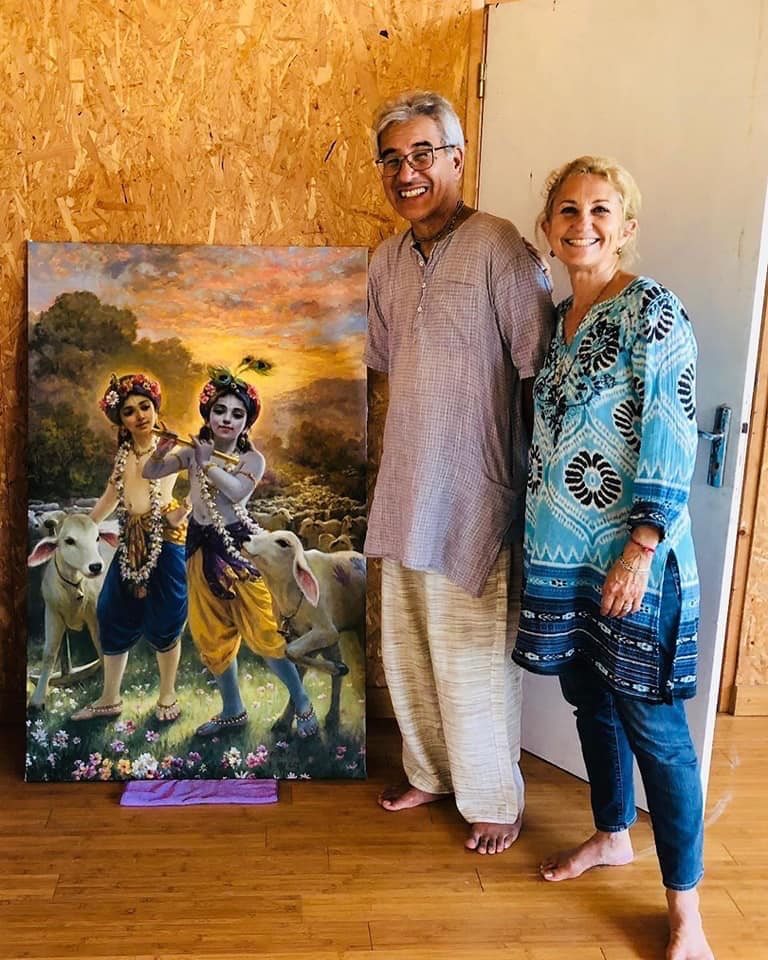 HG Ramesvara Das: Srila Prabhupada’s desire to show Shri Krshna to the entire world pours out of every part of this amazing empowered eternal spiritual couple. We can never repay our debt to you both for what you have revealed to the world – by Srila Prabhupada’s grace that he bestowed upon you!

Dear Respected Devotees
Hare Krsna. Pamho. AGTSP!
I am thunderstruck by this news. I worked closely with Sriman Ramdas Abhiramdas Prabhu for what seems like our entire devotional lifetimes as BBT soldiers-in-arms. He was one of Srila Prabhupada’s most dear, intimate and confidential servants. Srila Prabhupada blessed him and empowered him to present the Srimad Bhagavatam and the Šrí Caitanya-caritamrita through gorgeous transcendental paintings that captured the mind and heart and left one with feelings of spiritual awe and amazement and love. There were only a small handful of empowered souls who were allowed to paint for Srila Prabhupada’s books. Each of them was so rare, so empowered, so irreplaceable and so amazingly effective in showing all of humanity the spiritual world through these transcendental windows into the spiritual sky.

We will always love him and be eternally indebted and grateful to him. His work graces Srila Prabhupada’s books forever. Even more unique amongst all the BBT artists was the divine union he had with the most amazing Srimati Dhriti Devi through spiritual marriage and through a unique eternal connection with Srila Prabhupada as they both painted for his books.

To my beloved Godbrother and friend and BBT comrade-in-arms, I can’t quite say “Farewell” because you will always be with all of us. To his beloved wife and most empowered sweet artist, Srimati Dhriti Devi, there nothing in this world I wouldn’t do for you, and pray for that moment when you engage me in any way in serving you. I love you both eternally in more ways than I can describe and will always be your aspiring servant, Ramesvara Dasa

Sri Balarama - The Savior From The Labyrinth Of Maya!
Ballad of a Sankirtana Devotee