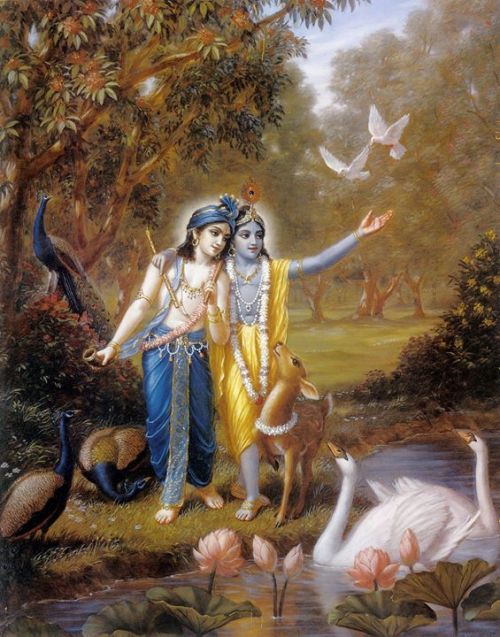 Krsna and His brother Balarama passed the childhood age known as kaumara and stepped into the age of pauganda, from the sixth year up to the tenth. At that time all the cowherd men conferred and agreed to give those boys who had passed their fifth-year charge of the cows in the pasturing ground. Given charge of the cows, Krsna and Balarama traversed Vrndavana, purifying the land with Their footprints.
Accompanied by the cowherd boys and Balarama, Krsna herded the cows and played on His flute through the forest of Vrndavana, which was full of flowers, vegetables, and pasturing grass. The Vrndavana forest was as sanctified as the clear mind of a devotee and was full of bees, flowers, and fruits. There were chirping birds and clear lakes with waters that could relieve one of all fatigue. Sweet-fragranced breezes blew always, refreshing the mind and body. Seeing the favorable situation, Krsna, Balarama, and Their cowherd friends entered the forest and enjoyed the atmosphere to the fullest extent.
Krsna saw that all the trees, overloaded as they were with fruits and fresh twigs, were bending down to touch the ground as if welcoming Him by touching His lotus feet. He was very pleased by the behavior of the trees, fruits, and flowers, and He began to smile, realizing their desires.
Krsna then spoke to Balarama as follows: “My dear brother, You are superior to all of us, and Your lotus feet are worshiped by the demigods. Just see how these trees, full with fruits, have bent down to worship Your lotus feet! It appears that they are trying to get out of the darkness of being obliged to accept the form of trees. Actually, the trees born in the land of Vrndavana are not ordinary living entities. Having held the impersonal point of view in their past lives, they now have the opportunity of seeing You in Vrndavana, and they are praying for further advancement in spiritual life through Your personal association.
“The herbs, creepers, and grass are also fortunate to touch Your lotus feet. And by Your touching the twigs with Your hands, these small plants are also made glorious. As for the hills and the rivers, they too are now glorious because You are glancing at them. Above all, the damsels of Vraja, the gopis, attracted by Your beauty, are the most glorious, for You embrace them wiyh Your strong arms.”
In this way Krsna and Balarama enjoyed in the forest of Vrndavana to their full satisfaction, along with the cows and cowherd boys.