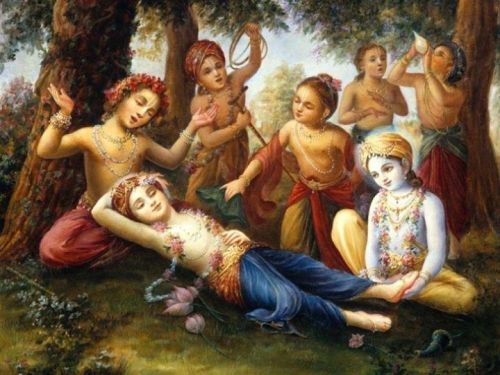 When His elder brother, fatigued from playing, would lie down with His head upon the lap of a cowherd boy, Lord Krsna would help Him relax by personally massaging His feet and offering other services. Sometimes, as the cowherd boys danced, sang, moved about, and playfully fought one another, Krsna and Balarama, standing nearby hand in hand, would glorify Their friends’ activities and laugh. Sometimes Lord Krsna grew tired from fighting and lay down at the base of a tree, resting upon a bed made of soft twigs and buds and using the lap of a cowherd friend as His pillow. Some of the cowherd boys, who were all great souls, would then massage His lotus feet, and others would expertly fan the Supreme Lord. Other boys would sing enchanting songs appropriate to the occasion, and their hearts would melt out of love for the Lord.
In this way the Supreme Lord, whose soft lotus feet are personally attended by the goddess of fortune, concealed His transcendental opulences by His internal potency and acted like the son of a cowherd.

Venice Maha Harinam 2016 (Album with photos) The last 6th of…

Bringing the Holy Names to schools. By Acarya Dasa (assisted by…

Vaishnava Wedding in Iskcon Farm of Postupice, Czechia (Album of…