Swamiji, you are so old—you are taking this responsibility. Do you think it is all right? 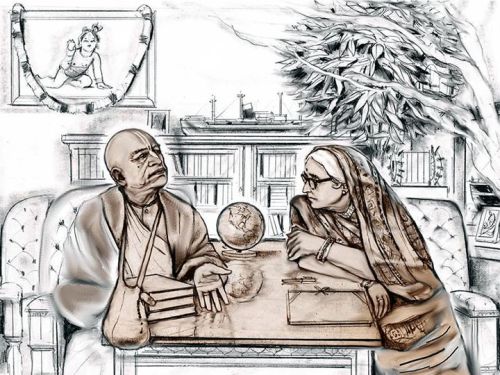 With his passport and sponsorship papers, Bhaktivedanta Swami went to Bombay, not to sell books or raise funds for printing; he wanted a ticket for America. Again he tried approaching Sumati Morarji. He showed his sponsorship papers to her secretary, Mr. Choksi, who was impressed and who went to Mrs. Morarji on his behalf. “The Swami from Vrindavana is back,” he told her. “He has published his book on your donation. He has a sponsor, and he wants to go to America. He wants you to send him on a Scindia ship.” Mrs. Morarji said no, the Swamiji was too old to go to the United States and expect to accomplish anything. As Mr. Choksi conveyed to him Mrs. Morarji’s words, Bhaktivedanta Swami listened disapprovingly. She wanted him to stay in India and complete the Srimad-Bhagavatam. Why go to the States? Finish the job here.
But Bhaktivedanta Swami was fixed on going. He told Mr. Choksi that he should convince Mrs. Morarji. He coached Mr. Choksi on what he should say: “I find this gentleman very inspired to go to the States and preach something to the people there…” But when he told Mrs. Morarji, she again said no. The Swami was not healthy. It would be too cold there. He might not be able to come back, and she doubted whether he would be able to accomplish much there. People in America were not so cooperative, and they would probably not listen to him.
Exasperated with Mr. Choksi’s ineffectiveness, Bhaktivedanta Swami demanded a personal interview. It was granted, and a gray-haired, determined Bhaktivedanta Swami presented his emphatic request: “Please give me one ticket.”

Sumati Morarji was concerned. “Swamiji, you are so old—you are taking this responsibility. Do you think it is all right?”
“No,” he reassured her, lifting his hand as if to reassure a doubting daughter, “it is all right.”
“But do you know what my secretaries think? They say, “Swamiji is going to die there.‘”

Bhaktivedanta made a face as if to dismiss a foolish rumor. Again he insisted that she give him a ticket. “All right,” she said. “Get your P-form, and I will make an arrangement to send you by our ship.” Bhaktivedanta Swami smiled brilliantly and happily left her offices, past her amazed and skeptical clerks.

Prayers for The Advent of Lord Krsna
Srila Prabhupada’s Departure for the USA (video)
Tagged under: Nectar

Why Do We Need a Temple?Chaitanya Charan Dasa: Ratan Gupta (RG)…

MotelGita: A comment from one of the guests who found the…