Friday 2 July 2010. Arhus was to be the first Rathayatra of the tour. Being a low budget tour we had to get to our destination as cheaply as possible. So we crossed the English channel from Ramsgate to Ostend in Belgium and then commenced a two day drive through Holland and Germany then into Denmark. Our old merc van used to be Tribhuvanath prabhu’s so you can imagine how old it is. The police in Germany had previously stopped us and told us the van belonged in a museum. Then 50km outside Arhus the unimaginable happened, we bloke down. It was 7pm, we fiddled with the van till 1am, took some rest, woke early and fiddled some more. Finally after a lot of tears, sweat and the occasional curse, the van moved. We were so elated. We arrived bang on time for an estatic Rathayatra. Lord Jaganath was making us call out in desperation.

HH Mahavishnu Swami heads up this tour. He’s a low maintenance swami and a real pleasure to be with. From morning to night we get non-stop Krishna katha. This years tour consisted of a van-load of devotees from England and a second vehicle with Tejas Vikrishna prabhu and the Madhura family. They are a professional dance and drama group from Russia – the nicest devotees you will ever meet. This year the tour consisted of 7 Rathayatras. The weather was glorious and we would camp by the lakes and forests. A transcendental holiday. This year we have organised over 20 Rathayatras and the amazing thing is that the weather was always great, which is a bit of a miracle considering we preach mostly in England. Just like in Manchester it rained that day until Jaganath sat on his cart, then the sun came out. As soon as the festival equipment was packed away and we were driving, the rain came down again. This happened so many times this year – was it by chance. In Oslo the Rathayatra was about to start when a group of tourists came off a boat. There was about 10 people from Jaganatha Puri amongst them. They could not believe their eyes to see the Lord of the universe in Oslo. They all ecstatically took part in the festival.

A team of sport girls from Mumbai happened to bump into the Rathayatra festival in Gotenburg: 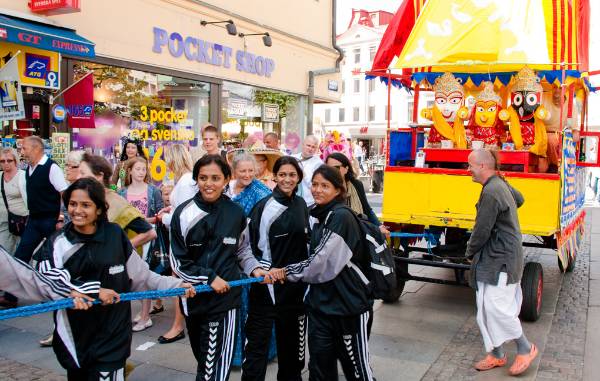