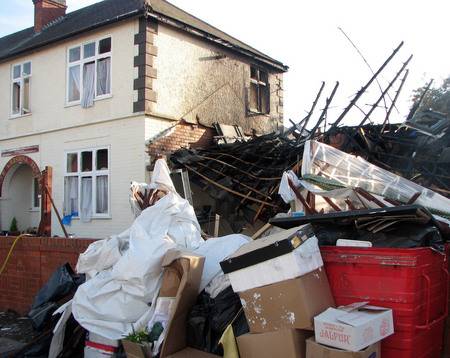 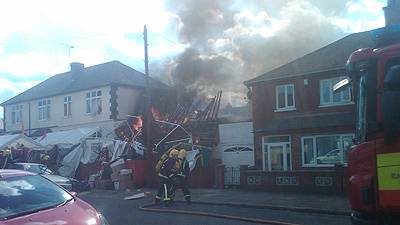 Firefighters said it was an “absolute miracle” no-one was killed in an explosion at a Hare Krishna temple.
The blast rocked the building after cylinders of gas powering a large cooker leaked during a festive meal.

About 30 people escaped from the temple in Leicester when the organiser raised the alarm just seconds before the explosion at about 2.30pm.

A third of the building in Thoresby Street was destroyed in the blast.

Worshippers had been cooking in the kitchen area during the afternoon for a religious festival, incident commander Bill Smith, of Leicestershire Fire and Rescue Service, said.

He said: “Most of the guests were in and around a marquee area just outside the building. In the kitchen they had a large LPG (liquefied petroleum gas) cylinder hooked up to a large gas ring.

When emergency services arrived it was unclear whether anyone was trapped inside, or underneath rubble left by the blast. Firefighters went into the building to conduct a search but it became too unstable to send more in. An urban search and rescue dog also scoured the wreckage but no-one was found.

Mr Smith said: “It’s an absolute miracle that nobody’s been injured or killed. You could tell how close people were because within about 10ft of the building were barbecue tables with food on.”

East Midlands Ambulance Service said four people, including a firefighter, were treated at the scene for minor injuries. The festivities were organised by Iskcon Leicester – the International Society for Krishna Consciousness – to mark Lord Krishna’s “Appearance Day”.

Save Yourself
Fulfilling Your Desires