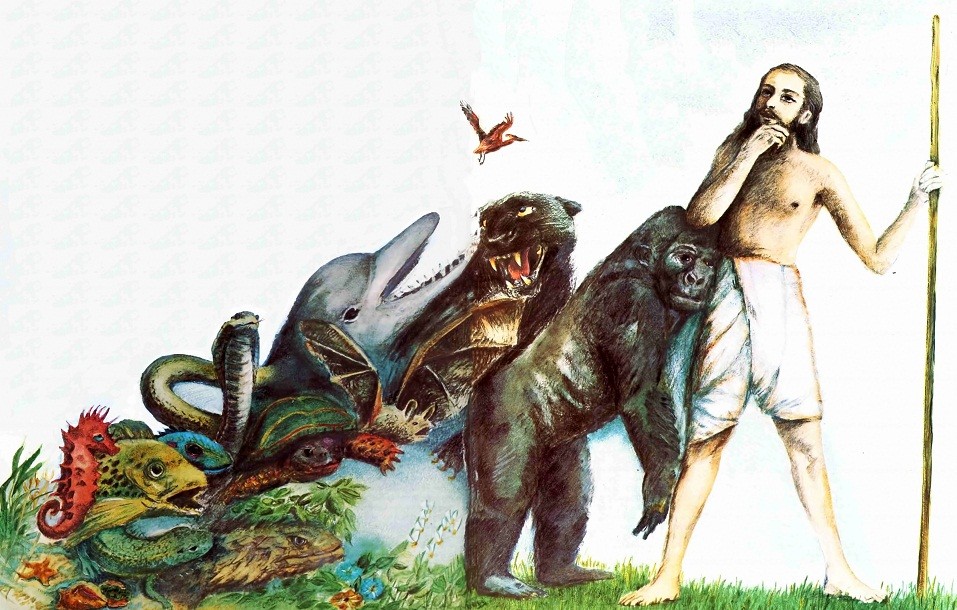 Over the years modern science has speculated and researched to find out the number of species on earth, the method that main stream science has adopted is experimental which is commonly known as “seeing is believing”, but without going much in detail regarding the imperfectness of this method, which is based on imperfect senses of the human being and imperfectness of the instruments developed by the human beings by these imperfect senses, it is extremely difficult to understand or gauge the vast variety of species that inhibit this tiny planet earth in the entire universe.

For those who have faith and logical thinking can ponder on the information given in the ancient Vedic Writings like the Srimad Bhagavatam about the construction and constitution of this material universe of which our earth is but a tiny speck. In connection to this, the Vedas give us a exact statistics of the number of inhabitants in this entire universe. As per the Vedic Writings among the living entities there are many species; which can be seen in our ordinary experience. Vedic literature gives a detailed statistics on the number of species of different living entities that are present in the universe, which is as follows

From the statistics seen above it is evident that the human species are less in number as compared to others. Moreover human body is endowed with advanced intelligence than the other species of life. Humans are termed as rational beings, since our body has the intelligence and capability of distinguishing right from wrong, acquiring knowledge and using our brain to accomplish many tasks.

Further the Vedic Scriptures inform us that even within the 400, 000 species of human beings many are uncivilized , like the aborigines, they are similar to animals , in the sense that they are intelligent enough to cater to the basic necessities of eating , sleeping, mating and defending. Human body is unique in many ways , but the most precious gift that human body has is the advanced intelligence. This intelligence has been bestowed upon human beings for a higher purpose. Vedic texts inform that this intelligence should be used to enquire about the Supreme Person ” atatho Brahman jijnasa” which means Now enquire about the Absolute Truth.

This verse conveys a very strong meaning. It says ” Now” you enquire about the Absolute Truth, this implies that now we have a suitable body and necessary facilities in the form of human form to enquire about the Absolute truth. Out of 8,400,000 species of life, only Human form of life is gifted with a higher intelligence , by which it is possible to enquire and understand the source of our existence and achieve eternal happiness. Now the question is why should I endeavor so much to understand the source, I might have come from somewhere , but now I have this form , I will enjoy as much as I can , what is the need to understand the supreme. As per the Vedic literature, even though you may be the richest man in this world , the opulence that you receive is temporary, since as per the law of Karma whatever actions you have performed in this life will determine your next life, so if one only enjoys by eating , sleeping, mating and defending in this human form of life, which is done by animals in a better way, by natures law one will be degraded to the animal form again. It is mentioned in the Vedic literatures that every living entity has to gradually evolve from these various species of life to obtain this most valuable human form of life. Hence one has to go through numerous species of life forms, becoming a tree ,snake, rat, cat, dog, pig , etc and after going through each of these 8,400,000 species of life forms one receives the benediction of this human form of life.

Hence it is a rare opportunity and if one wastes this opportunity only in sense gratification, simply using his intelligence for satisfying the basic necessities of life i.e eating, sleeping , mating and defending in a sophisticated way , is considered most unfortunate and foolish as per the Vedic literature. This is compared to a person , who receives a million dollars and does not invest it to gain profits in the future, and instead insanely exhausts it by spending it only for his leisure and finally becomes bankrupt again. The human body is a platform from which, by utilizing it properly to perform activities conducive to advanced spiritual life can go to higher planets or even Back to Godhead where he does not face the miseries of birth, death, old age and disease OR one can misuse it and waste his life in false pursuits to satisfy the senses which will only drag him down to the hellish regions and again to continue the process of birth ,death old age and disease through 8,400,000 species of life.

The current Age of Kali, is called the age of quarrel and disagreement, this is the age,where the people are always anxious and quarrelling on trivial issues, mostly people are less intelligence and do not have much interest in spiritual topics. People in this age have short life spans and are very unfortunate because they are cheated very often, People are short sighted, and passionate. In short as Sukadeva Goswami said to Parikshit Maharaj, that this Age of Kali is a ocean of faults, but by chanting the holy names of God , i.e , Hare Krsna Hare Krnsa Krsna Krsna Hare Hare / Hare Rama Hare Rama Rama Rama Hare Hare, one can become liberated without much endeavor, this is the only good thing about this age.

“My dear King, although Kali-yuga is an ocean of faults, there is still one good quality about this age: Simply by chanting the Hare Krishna maha-mantra, one can become free from material bondage and be promoted to the transcendental kingdom.”

So in this Age of Kali , it is very difficult to expect an ordinary man to read and understand the importance of Human form of life, only by saintly association and chanting the holy names of God, Hare Krsna Hare Krsna Krsna Krsna Hare Hare/ Hare Rama Hare Rama Rama Rama Hare Hare , can ones mind be cleansed of all the anxieties and he will be able to understand the unique gift of this human form of body.

One Response to “Human form of life”