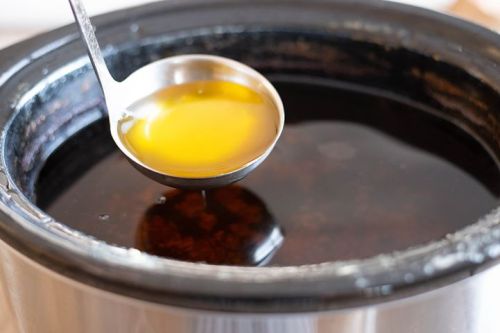 Srila Prabhupada taught us that for cooking, clarified butter, known as Ghee is the only oil to use. At Henry Street Radha Govinda temple the cooks strictly followed that instruction.
To make ghee you take unsalted butter–not vegan butter or margarine and slowly let it simmer for many hours. Eventually, the pure butter oil or ghee collects at the bottom of the pot and the impurities float to the top.
Mangalananda (Michael Mangalananda Cassidy on FB) was our head cook in 1974. He and his helpers were preparing a 40-gallon pot of ghee that they could use for several weeks. This much ghee required many, many pounds of butter, and hours of simmering. Then at the end, skimming the impurities off the top to end up with ghee. By the end of the day, the ghee was complete. A pure, golden 40 Gallon pot of butter oil. Having accomplished their task, they retired for the night.
Now after the cooks were done for the day, a cleaning crew came in and cleaned the kitchen till it was spotless. Prabhupada always said that devotees/ Brahmanas are revolutionarily clean.
So on this day, there was a new bhakta cleaning. When he saw the pot of ghee he thought,“ I must clean this pot that the cooks left.”
Yes, you guessed it. He poured the whole 40 gallons of ghee down the drain and cleaned that pot till it shined. Having cleaned the whole kitchen and especially that oily pot he retired for the night.
Now the night rolled by and soon it was time for the Mangal Arati. We had just finished Tulasi puja when we heard a terrible scream from the basement. I and several others ran downstairs to the kitchen. Only to find the head cook at wit’s end yelling–”WHERE IS THE GHEE??”

ISKCON SCOTLAND, KARUNA BHAVAN temple is inviting Devotees to Volunteer
Srila Prabhupada: My Guru Maharaja used to say that this material world is not fit for living for any gentlemen
Tagged under: Nectar

The City Of Victory (Album with 222 photos) Indradyumna Swami:…