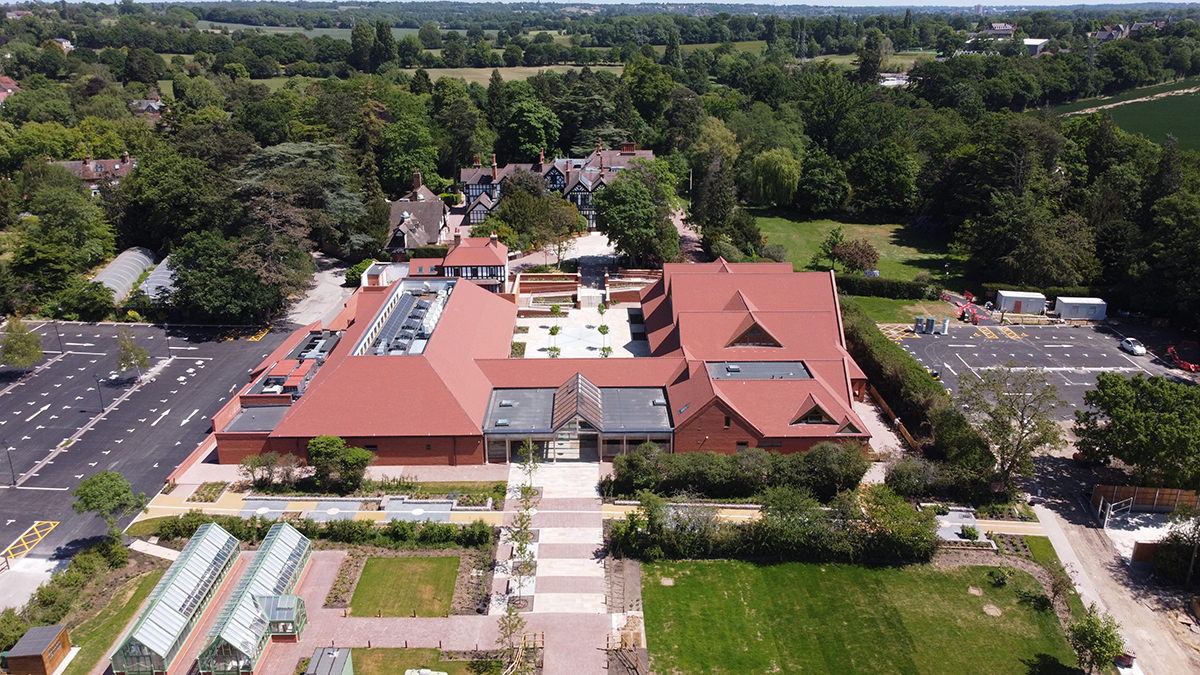 We are happy to say that we have now successfully completed our purpose-built hall, the Sri Krishna Haveli, which will take the pressure off the main Grade II listed Manor building to provide a spacious environment that will allow you to fully appreciate your spiritual experience at Bhaktivedanta Manor. It is of course wonderful, much-awaited news, but like with many big projects there were some hurdles, heartache, and not to mention the pandemic, along the way.

This is how it all came about…

If you have ever been to Bhaktivedanta Manor on a Sunday evening, I am sure you can relate to the frustration of trying to find a place for your shoes. And even more frustrating is trying to locate them on your way out! What to speak of queuing behind a crowd of hundreds of other people trying to squeeze into the temple room, many times feeling like it’s rush hour on a packed underground train, only to find that you can’t get in because there is a guest speaker visiting, with another couple of hundred devotees eagerly occupying every corner of floor space.

In 2007 the temple wrote to the local council requesting to build a small village or church style hall. The council responded by asking for the temple’s development requirements for the next 15 years. A complete needs assessment was carried out by Cottrell and Vermeulen in 2010, and an additional independent assessment was completed by Rasamandala Das, who consulted with various teams and the community at Bhaktivedanta Manor to establish that in the event of having extra facility, what they would use it for.

The various activities were put in order of priority based on how many times they had been raised and the attention that had been focused on them. These consultations moved forward to become a public brief and the planning application was put forward in December 2014. The most difficult task was balancing the needs of the temple and the local community. Ensuring that our facilities will be for housing the current needs of the temple and not to increase activities, planning was granted on 21st April 2016. This was the year ISKCON celebrated 50 years since its establishment.

After receiving more than 6 tenders from various contractors, the construction company Vascroft was chosen to proceed with building. A grand ground-breaking ceremony was held with guest of honour, David Cameron, the then UK prime minister.

Havelis are traditional buildings that can be found in many places in India. The idea of a Haveli was inspired by Havelis of Keshi Ghat and Radha Raman temple, Radha Shyamasundar temple and Sri Radha Damodar temple. All these temples are ornate buildings which have Rajasthani post-medieval architecture, which was drawn from a variety of sources from Persia to India. They were generally built from stone and sandstone, with ornate windows and a little courtyard in the middle to keep it cool in the summer. In time, these Havelis became temples, devotional buildings that were very prominent around Vraj, Rajasthan and various other places.

Sri Krishna Haveli was designed so that it wold sit well between the rustic goshala and not overshadow Bhaktivedanta Manor, the mock Tudor mansion. To complement the local area and respect the culture of the locality, oak, timber, tile and traditional red brick with stone paving were chosen as typical of the area of Hertfordshire and wider England. The design was chosen to respect the past and to look to the future, representing authentic construction of today, with sustaining features and characters. Bespoke line patterns based upon Rajasthani and formal English patterns were created by Kishori Radha Dasi to maintain a devotional culture. Mouldings were carved in teak in India and sent to the UK to be further developed. You will see this in the inner ceilings of the veranda walk-way.

What’s going on at the Haveli?

You will be welcomed by a beautiful chakra garden with the heart chakra at the entrance. The heart is central to the Bhakti tradition as everything comes together in the heart.
There will be lively kirtans, classes by visiting speakers, weddings and other functions in the Kirtan hall which is a formal and high-quality room with beautiful wood panelling, a stage and lighting. To the rear there are dressing rooms for stage performers and brides and grooms to be.

The Seva hall is conveniently situated beside a fully equipped bespoke kitchen for easy access to serve prasad to all our guests. This hall can also be subdivided into three sections and can be used for clubs, yoga and childrens activities.

The upstairs learning area is called Bhakti Vidyalaya with two areas for teaching: the Atma Vidya and Paramatma Vidya rooms. Bhakti is the means through which the tiny soul and great soul come into each other’s company, through which revelation of divinity takes place. These rooms will be used primarily to host visiting schools that come to learn about Hinduism and the Bhakti Tradition. They will also be used by the School of Bhakti.

Outside there is an exciting space for children in the Haveli playground. This play area was designed with ideas from the children in the Gurukula School and Krishna Club. It is centred around Krishna’s childhood pastimes with the Aghasura and Bakasura demons and Kaliya the serpent. Made from old trees, it is an area where the children play and engage just like Krishna did with His friends. The playground serves as a safe space for children to play and creatively engage, focusing on the pastimes of Lord Krishna.

Farewell to the soldiers

Early in 2018, at the beginning of construction, His Grace Srutidharma das, then temple president at Bhaktivedanta Manor, was diagnosed with cancer. Serving the community for more than forty years, a stalwart leader and servant of all, he inspired and worked unwaveringly with others to turn this ‘from dream to reality’ as an offering to Srila Prabhupada and the community. He sadly passed away on 10th March 2020. We also lost Rameshwar das, shortly afterwards, who worked tirelessly to raise funds for this project.

A visit from the PM

As part of his election campaign in December 2019 Boris Johnson, inspired by the community activities at Bhaktivedanta Manor, visited the Sri Krishna Haveli. He was accompanied by Oliver Dowden, Culture Secretary, and Priti Patel, Home Secretary, as well as the Lord Lieutenant of Hertfordshire Robert Voss and other MP’s. During Mr Johnson’s visit he placed a garland around Srila Prabhupada and received blessings from Their Lordships Sri Sri Radha Gokulananda.

A three-day Haveli opening was planned and ready, when unfortunately, due to the Covid-19 pandemic, cautions were put in place for the imminent government lockdown. All departments were set and raring to go to begin use of the new facilities, but the Lord had other plans. Many members of the community fell ill with the virus and we sadly said farewell to a few more dear devotees.

During this pandemic, the builders continued to work on the Haveli and completed June 2020.

The projected cost of the Haveli was initially £9.6 million and with design changes, price increases and additions, the final cost of the project is £10.65 million.

As the builders were on site we instructed them to complete ancillary projects, which have been in a state of disrepair and required to be done. The design & installation of the new children’s playground, resurfacing of both cark parks, with installation of E-charging points and new lighting. The ladies ashrama has also been renovated and its roof replaced. The temple building now has a beautiful paved path around it, for the pleasure of the Vaishnavas, who can now do parikrama safely, without stepping into potholes and puddles. The Manor school, Gift shop and the Bakery also needed to be relocated, so that they could continue to provide their services.

To make sure construction did not stop the temple raised a bank loan of £5 million. Most of the funds have been raised in the form of pledges, and the devotees are working very hard, encouraging donors to fulfill their pledges of support.

This project has been the largest single project, since the time of George Harrison donating Bhaktivedanta Manor in 1973. Over the last 40 years we have seen incredible changes; through many trials and tribulations, the devotees have continued to remain focused on their duty and getting on with what needs to get done.

Despite the challenges of a world that is constantly changing, the devotion and determination of Krishna’s devotee will definitely ensure a bright future. As Lord Krishna says in the Bhagavad gita:

Wherever there is Krishna, the master of all mystics and wherever there is Arjuna, the supreme archer, there will also certainly be opulence, victory, extraordinary power, and morality. That is my opinion.

Our heartfelt gratitude and appreciation to you all for your unfailing support, which has made Bhaktivedanta Manor, an oasis of spiritual culture in the UK. Your sacrifices and seva for Sri Krishna, remain to your eternal credit. Hare Krishna.