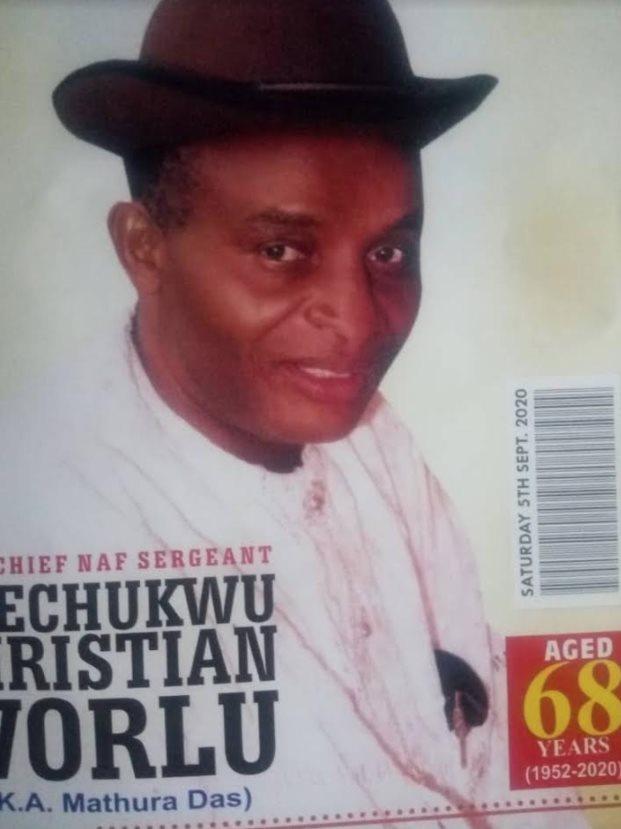 The body of His grace Mathura das was committed to mother earth over the weekend, Saturday 5th September 2020’s afternoon at Rumuola, in Port Harcourt, Nigeria, following vaisnava burial rites conducted by HG Ganga Das and witnessed by immediate members of his family, his siblings, chiefs, many devotees etc.

His Grace Mathura prabhu joined ISKCON in the early eighties in PH and served in different capacities as temple commander, temple president, a good Sankirtan devotee etc. He was a sergeant in the Nigerian Air force when he joined. Diving headlong into Krishna Consciousness, he had assured his siblings that he was doing this for their own interest and benefit.

He got married to HG Kunti Devi Dasi and both of them served in Hare Krishna temples in different parts of Nigeria and are both BT Swami’s disciples. When it came to BT swami’s knowledge that Mathura Prabhu had siblings who were still very young, he instructed him not to serve as full-time temple devotee but should go home so as to look after his younger brothers while practicing from home, being the breadwinner of the family.

He followed HH BT Swami’s instruction and went back to their home at Rumuola, the same community where the Hare Krishna temple was at that time. His house- not surprising- was practically like a second temple in the heart of PH as he and his family hold all normal temple programs since then till date. All his children- 2 males and 4 females are all devotees, thus creating the first and consistent vaishnava family in Rivers State, Nigeria. He was a man of dignity, highly respected.

He was a chief and remained a community leader in Rumuola community till his departure. He was addressed as ‘Bishop’ by members of his community in an effort to give him a befitting title that suits his personality. He played host to many gurus and other ISKCON leaders from home and abroad that came to PH and HH BT Swami visited his house whenever he was in Port Harcourt.

He left the body on the auspicious day and time of 20th of February 2020, after full Ekadasi fast on the 19th. On the night of Ekadasi fast, he had requested that bhajans(devotional songs) and Srimad Bhagavatam(Scripture) be played to his hearing.(a kind of conscious preparation to leave). Thus, he passed on on Dvadasi, between Ekadasi and Sivaratri absorbed in Krishna consciousness. He had observed full Ekadasi fast in spite of his frail health, having battled with Parkinson problem since 2013. What a glorious way to leave this material environment.

He was such a strong man and strict follower of Krishna consciousness that throughout his stay in Lagos temple, battling with the illness, he woke earlier than others (before 4.00am) to prepare for morning worship (mangal arati) at 4.30am and not only chanted the 16 prescribed rounds of japa(prayers) but chanted more than that on a daily basis. Although he passed on in February, he could not be buried earlier than now due to government COVID 19 restrictions. Mathura Prabhu’s burial was attended by devotees from different parts of Nigeria as well as people from all walks life. In their heart-melting and tear drawing eulogium, Mathura Prabhu’s younger brothers(who reiterated that his joining of Hare Krishna was indeed a blessing) sisters, children, temple presidents, his son Inlaw(Kavikarnapura prabhu) brothers Inlaw, devotees panegyrically extolled his outstanding devotional cum circular life qualities. Devotees chanted bhajans and performed kirtans on the 4th and the 5th of September both in Rumuola and at Ojasvishyam’s place, before, during and after his internment.

Please offer your vaisnava blessings and prayers for Gurudeva to lead him home back to Krishna’s eternal abode and to grant members of his family, especially mother Kunti, Hari Kirtan etc the strength to bear this painfully irreparable/irreversible loss.

“He reasons ill who says that a vaishnava dies..”
Sent in from: ISKCON NIGERIA