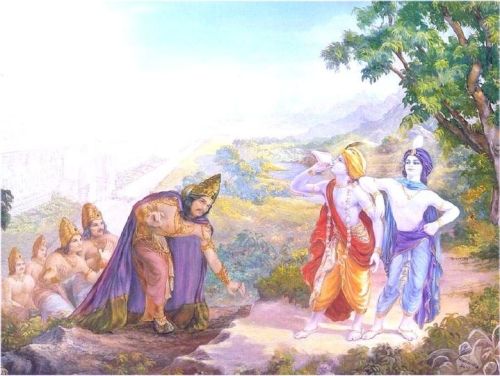 When Krsna and Balarama offered Their teacher, Sandipani Muni, anything he desired, he asked for the return of his son, who had drowned in the ocean at Prabhasa. The two Lords at once traveled there on Their chariot and ordered the ocean to return Their guru’s son.
But the deity of the ocean advised Krsna that the boy had been captured by a demon named Pañcajanya. Hearing this, Krsna dove deep into the water and killed the demon on the spot. finding no trace of His teacher’s son, He took the demon’s dead body, which was in the shape of a conch shell, and went with Balarama to Samyamani, the residence of Yamaraja. Upon arriving at Yamaraja’s abode, Krsna blew on His conch shell.
Hearing the vibration, Yamaraja appeared and received Krsna and Balarama with respectful obeisances and elaborate worship. Yamaraja then said, “O Lords, what shall I do for You, who are playing the part of ordinary humans?” Lord Sri Krsna asked Yamaraja to return His teacher’s son, and this was immediately done. Then Krsna and Balarama brought the boy back to his father.

Bhakti Chaitanya Swami: Today at the ILS – the ISKCON Leadership…