KRSNA MEETS THE GOPIS AT KURUKSETRA 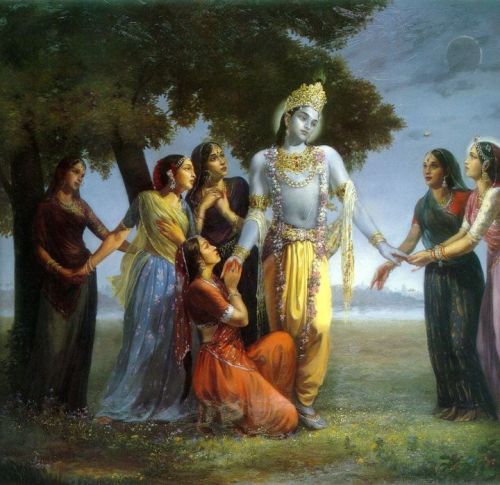 KRSNA MEETS THE GOPIS AT KURUKSETRA

Hearing that a total eclipse of the sun was soon to occur, people from all over India, including the Yadus and the residents of Vrndavana, converged at Kuruksetra to earn special pious credit. When Krsna and Balarama saw Nanda Maharaja and mother Yasoda, both the Lords and Their foster parents were overcome with emotion. Raising their two sons onto their laps and holding Them in their arms, Nanda and saintly mother Yasoda forgot their sorrow.
Later, when Yasoda and Rohini were conversing, Krsna took the opportunity to go to a secluded place to meet with the gopis. From the very beginning of their lives the gopis had known nothing beyond Krsna. He was their life and soul. The gopis were so attached to Krsna that they would condemn Brahma, the creator of their bodies, because he foolishly made eyelids that blinked occasionally and thus impeded their constant gazing at Krsna. Because they had been separated from Krsna for so many years, the gopis now felt intense ecstasy in seeing Him. No one can even imagine how anxious the gopis were to see Him again. As soon as Krsna became visible to them, they took Him inside their hearts through their eyes and embraced Him to their full satisfaction. Even though they were embracing Krsna only mentally, they became so ecstatic and overwhelmed with joy that for the time being they completely forgot themselves.
Krsna began to encourage the gopis: “Fortunately, you have developed loving affection for Me, which is the only way to achieve the transcendental position of association with Me. Any living entity who develops such unalloyed devotional affection for Me certainly at the end goes back home, back to Godhead. Since I am all-pervasive through My spiritual and material energies, in truth we are never separated. Therefore try to understand that you are always with Me and that there is no cause for lamentation in our seeming separation from one another.”