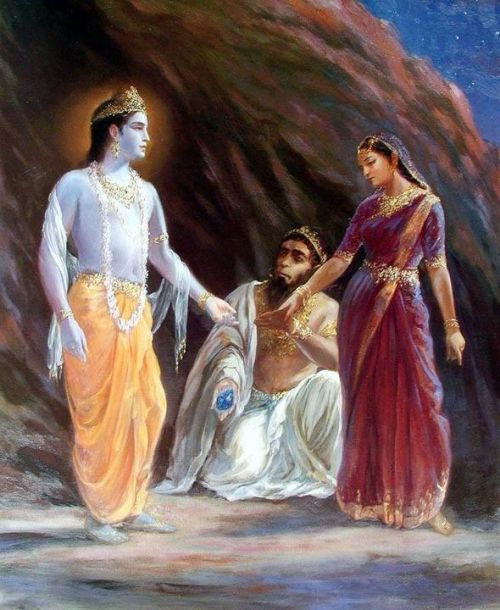 The sun-god felt great affection for his devotee Satrajit, and as a token of his satisfaction the demigod gave him the Syamantaka jewel. Each day the gem would produce about 170 pounds of gold, and the place where it was kept and properly worshiped would be free of calamities such as famine or untimely death, and also of evils like snakebites, mental and physical disorders, and the presence of deceitful persons.
On one occasion, Lord Sri Krsna requested Satrajit to give the gem to the King of the Yadus, Ugrasena. But Satrajit refused, obsessed as he was with greed. shortly thereafter, Satrajit’s brother Prasena left the city on horseback, wearing the Syamantaka jewel on his neck. On the road, a lion killed Prasena and took the jewel away to a mountain cave, where Jambavan, King of the bears and a great devotee of Lord Ramacandra, happened to be living. Jambavan killed the lion and gave the jewel to his son as a toy.
When Prasena did not return, Satrajit presumed that Sri Krsna had killed him for the Syamantaka gem. The Lord heard about this rumor circulating among the general populace, and to clear His name He went with some of the citizens to find Prasena.
The Lord stationed His subjects outside Jambavan’s terrifying, pitch-dark cave and then entered it alone. Within the cave Lord Krsna saw Jambavan’s child playing with the precious Syamantaka jewel.
Determined to take it away, He approached the child.The child’s nurse cried out in fear upon seein Krsna, and when Jambavan heard her cries, he angrily ran toward the Lord.
Unaware of Krsna’s true position, Jambavan angrily began fighting with the Supreme Lord, his master. The two fought furiously in single combat, each determined to win. Contending against each other with various weapons and then with stones, tree trunks, and finally their bare hands, they struggled like two hawks battling over a piece of flesh. The fight lasted twenty-eighy days, the two opponents striking each other with their fists, which fell like thunderbolts. His bulging muscles pummeled by the blows of Lord Krsna’s fists, his strength faltering, and his limbs perspiring, Jambavan, greatly astonished, finally spoke to the Lord:
“You are the ultimate creator of all creators of the universe, and of everything created you are the underlying substance. You are the subduer of all subduers, the Supreme Lord and Supreme Soul of all souls.
Lord Krsna then blessed Jambavan by touching him with His hand, and then He said, “It is for this jewel, O lord of the bears, that we have come to your cave. I intend to use the jewel to disprove the false accusations against Me. Jambavan then happily honored Lord Krsna by offering Him his maiden daughter, Jambavati, together with the jewel.

Harinama at the White House during the Krishna House Summer Trip…

Five beings that should always be appreciated, valued and protected