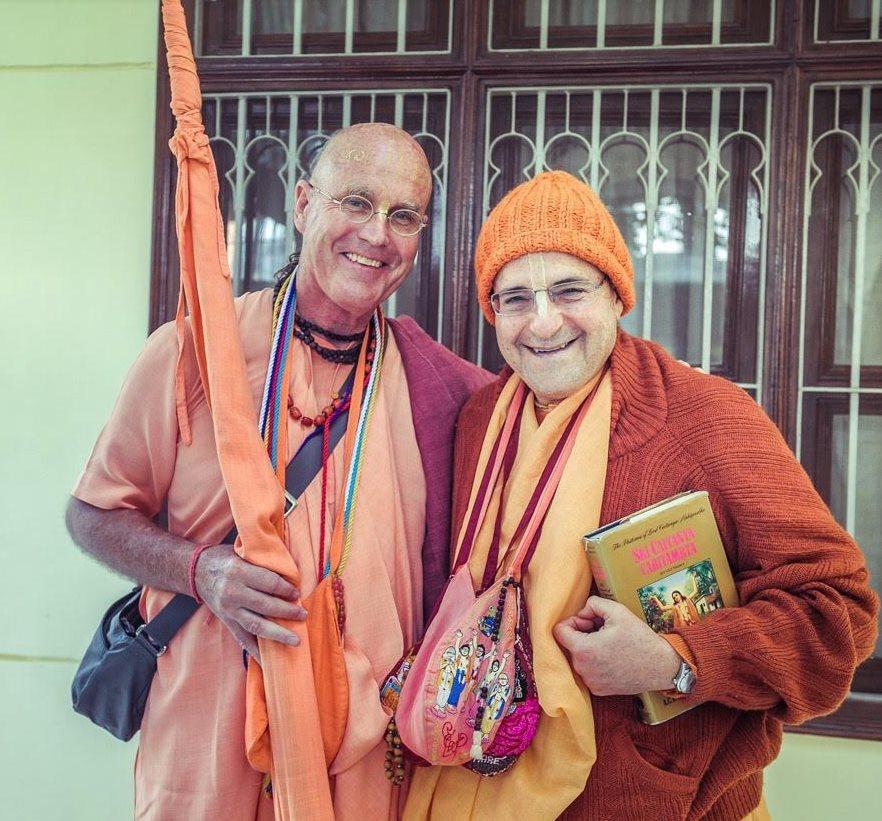 I always feel a little awkward addressing you as my friend for you are, in fact, senior to me in every way in Krsna consciousness. You are more learned and wiser in your understanding of our sacred scriptures; as an older sannyasi and emeritus GBC member you are more experienced in the ways of our ISKCON society; and your personal association with Srila Prabhupada in the formative years of our movement has given you a seemingly unlimited reservoir of his pastimes to share with us, as well as insights as to how he desired his mission to be run.

An example that often comes to my mind is when, towards the end of his earthly pastimes, Srila Prabhupada asked you how this movement would go on in his absence. You gave a very nice reply: “By chanting our 16 rounds and following the 4 regulative principles.” Surely Srila Prabhupada accepted your reply, but, recognizing you as a future leader in his movement, he gave a further answer to his own question: “By organization and intelligence.”

But it wasn’t just that Srila Prabhupada saw potential in you; he also witnessed you fulfilling that potential in your selfless and untiring efforts to help him fulfill his promise to Radha-Rasabihari to build a temple for Them. When your magnum opus, “I’ll Build You A Temple – The Juhu Story” is published, we will all be able to read in full just how immense the struggle was to establish that temple. Srila Prabhupada summed it up appropriately when he remarked: “It was a good fight.” And you, dear Maharaja, were involved in so many ways from beginning to end, so much so that Srila Prabhupada said on one occasion: “Giriraja is Bombay and Bombay is Giriraja.”

How fortunate I am to have you as a friend!

“Every learned man knows very well that attachment for the material is the greatest entanglement of the spirit soul. But that same attachment, when applied to the self-realized devotees, opens the door of liberation.”

When I compare myself to your purity, your sense of purpose, your strictness in following our process, and your deep, enduring and endearing love for our spiritual master Srila Prabhupada, I see how far I am from the goal. But I don’t become discouraged because I have faith in one of the instructions Srila Prabhupada gave me in the one and only letter he ever wrote to me: “Always follow in the footsteps of advanced devotees.”

My dear Maharaja, I will state it publicly and unequivocally here. Let the whole world know, now and forever, that you are the number one “advanced devotee” in my life in whose footsteps I follow. I have 100% confidence in your faith in Srila Prabhupada and his trust in you. That’s all I require. If, for whatever reason, they stop me at the “pearly gates” of the spiritual world and stare at me in disbelief as if to say, “What are you doing here?” I’ll smile and reply, “I’m just following in the footsteps of my good friend Giriraja Swami who passed this way not too long ago.” No doubt they’ll check their records and say, “Oh yes, he put in a good word for you. Welcome home!”

Maharaja, my father once told me I would be lucky if I made one or two real friends throughout my entire life. At the time I wondered how I could ever be satisfied with so little camaraderie. But now I know. It’s not so much the quantity but the quality of the friends we keep close to our hearts: friends who imbibe the same love for sadhana and sadhya, the practice and the goal of Krsna consciousness. His Divine Grace Srila Bhaktisiddhanta Sarasvati stressed this in his final instructions to his disciples on December 23, 1936, just a fortnight before his left this world:

“In the performance of samkirtan, if your single-minded devotion goes on increasing, then all your desires will be fulfilled, and all your goals achieved. Working together with the same purpose, we will become qualified for the service of Radharani, the original reservoir of love for Krishna.”

Dear Maharaja, I look forward to many more years of serving Srila Prabhupada together with you and our esteemed godbrothers and godsisters and all the assembled devotees! I am confident that by serving Srila Prabhupada’s desire to give Krsna consciousness to the people of this world we will qualify ourselves to one day serve him and the residents of Vrindavan in the spiritual world. Dearest Maharaja, we look to you to show us the way!

Before finishing, I want to offer you and all your wonderful disciples a most precious gift. For several weeks now leading up to this ceremony, I have been contemplating your amazing qualities for the purpose of composing a unique and appropriate pranam mantra for your good self. It’s traditional that an initiating spiritual master has a pranam mantra that his disciples chant each time they bow down to him. A pranam mantra imbibes the essential characteristics and achievements of the spiritual master which are unique to him. I discussed with a few of your senior disciples and we agreed on several qualities that stand out in your service to guru and Gauranga. Then I conferred with Hari Parsada Prabhu, a member of the GBC Sastric Advisory Committee and we came up with the following mantra:

“I offer my respectful obeisances unto Srila Giriraj Swami, who is very dear to Lord Krishna on this earth, having taken shelter at His lotus feet. He is loved by Srila Prabhupada and is an expert speaker and knower of sastra. He is fixed in sadhana and has given his life in service to Radha-Rasabihari and the devotees.”

Forever following in your footsteps….