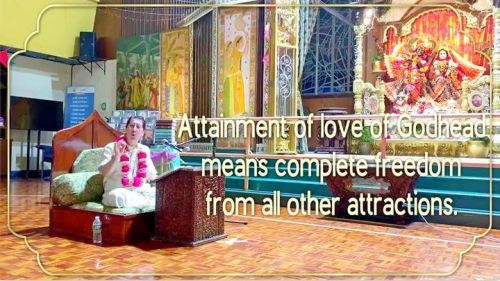 Attainment of love of Godhead means complete freedom from all other attractions. (video)
Recent Srimad Bhagavatam class by HG Hansarupa Dasa ACBSP in ISKCON NYC.
Only the purified soul can attain the perfection of associating with the Personality of Godhead in complete bliss and satisfaction in his constitutional state. Whoever is able to renovate such devotional perfection is never again attracted by this material world, and he never returns.
PURPORT
We should specially note in this verse the description of gatiṁ bhāgavatīm. To become merged in the rays of the Parabrahman, the Supreme Personality of Godhead, as desired by the brahmavādī impersonalist, is not bhāgavatīm perfection. The bhāgavatas never accept merging in the impersonal rays of the Lord, but always aspire after personal association with the Supreme Lord in one of the Vaikuṇṭha spiritual planets in the spiritual sky. The whole of the spiritual sky, of which the total number of the material skies is only an insignificant part, is full of unlimited numbers of Vaikuṇṭha planets. The destination of the devotee (the bhāgavata) is to enter into one of the Vaikuṇṭha planets, in each of which the Personality of Godhead, in His unlimited personal expansions, enjoys Himself in the association of unlimited numbers of pure devotee associates. The conditioned souls in the material world, after gaining emancipation by devotional service, are promoted to these planets. But the number of ever-liberated souls is far, far greater than the number of conditioned souls in the material world, and the ever-liberated souls in the Vaikuṇṭha planets never care to visit this miserable material world.
The impersonalists, who aspire to merge in the impersonal brahmajyoti effulgence of the Supreme Lord but have no conception of loving devotional service to Him in His personal form in the spiritual manifestation, may be compared to certain species of fish, who, being born in the rivers and rivulets, migrate to the great ocean. They cannot stay in the ocean indefinitely, for their urge for sense gratification brings them back to the rivers and streams to spawn. Similarly, when the materialist becomes frustrated in his attempts to enjoy himself in the limited material world, he may seek impersonal liberation by merging either with the Causal Ocean or with the impersonal brahmajyoti effulgence. However, as neither the Causal Ocean nor the impersonal brahmajyoti effulgence affords any superior substitute for association and engagement of the senses, the impersonalist will fall again into the limited material world to become entangled once more in the wheel of births and deaths, drawn on by the inextinguishable desire for sensual engagement. But any devotee who enters the kingdom of God by transcendental engagement of his senses in devotional service, and who associates with the liberated souls and the Personality of Godhead there, will never be attracted to the limited surroundings of the material world.
In the Bhagavad-gītā (8.15) also the same is confirmed, as the Lord says, “The great mahātmās, or the bhakti-yogīs, after attaining My association, never come back to this material world, which is full of miseries and is nonpermanent.” The highest perfection of life, therefore, is to attain His association, and nothing else. The bhakti-yogī, being completely engaged in the Lord’s service, has no attraction for any other process of liberation like jñāna or yoga. A pure devotee is a one hundred percent devotee of the Lord and nothing more.
We should further note in this verse the two words śāntam and ānandam, which denote that devotional service of the Lord can really bestow upon the devotee two important benedictions, namely peace and satisfaction. The impersonalist is desirous of becoming one with the Supreme, or in other words, he wants to become the Supreme. This is a myth only. The mystic yogīs become encumbered by various mystic powers and so have neither peace nor satisfaction. So neither the impersonalists nor the yogi can have real peace and satisfaction, but the devotee can become fully peaceful and satisfied because of his association with the complete whole. Therefore, merging in the Absolute or attaining some mystic powers has no attraction for the devotee.
Attainment of love of Godhead means complete freedom from all other attractions. The conditioned soul has many aspirations such as becoming a religious man, a rich man, or a first-class enjoyer or becoming God himself, or becoming powerful like the mystics and acting wonderfully by getting anything or doing anything, but all these aspirations should be rejected by the prospective devotee who actually wants to revive his dormant love of God. The impure devotee aspires after all of the abovementioned material things by perfection of devotion. But a pure devotee has none of the tinges of the above contaminations, which are the influence of material desires, impersonal speculations and attainment of mystic powers. One can attain the stage of love of God by pure devotional service, or by “a learned labor of love,” for the sake of the devotee’s lovable object, the Personality of Godhead.
To be more clear, if one wants to attain the stage of love of Godhead, he must give up all desires for material enjoyment, he should refrain from worshiping any of the demigods, and he should devote himself only to the worship of the Supreme Personality of Godhead. He must give up the foolish idea of becoming one with the Lord and the desire to have some wonderful powers just to get the ephemeral adoration of the world. The pure devotee is only favorably engaged in the service of the Lord, without any hope of emolument. This will bring about love of Godhead, or the stage of śāntam and ānandam, as stated in this verse.
Watch it here: https://is.gd/tqBhW6

In a galaxy far far away Luke Skywalker (Mark Hammel) gets…