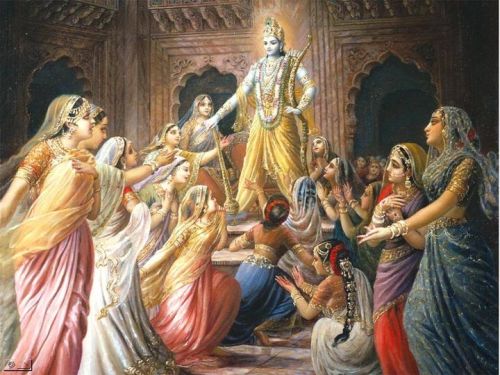 Once a demon named Bhaumasura stole Lord Varuna’s umbrella, mother Aditi’s golden ear rings, and the playground of the demigods, known as Mani-parvata. He also kidnapped 16,100 beautiful young maidens from various royal families all over the world. Indra, King of heaven, went to Dvaraka to describe the demon’s transgressions to Lord Krsna. Together with Queen Satyabhama, the Lord then mounted His carrier Garuda and traveled to the capital of Bhaumasura’s kingdom.
On a field outside the city He decapitated the demon Mura with His disc. Then He fought and killed the seven sons of Mura, sending them all to the abode of death. After this, Bhaumasura himself entered the battlefield on the back of an elephant and attacked Krsna with his spear, but the weapon proved ineffective, and Krsna cut the demon’s entire army to pieces. finally, with His sharp-edged disc Krsna cut off Bhaumasura’s head.
Afterwards Lord Krsna entered the demon’s palace, where He found the 16,100 princesses. As soon as they caught sight of the Lord, they all decided to accept Him as their husband. In Vedic society, once a girl has been kidnapped she is considered defiled and unfit for marriage. Yet the Lord, out of His causeless mercy and in response to their love for Him, decided to marry all of them. Thus He sent them to Dvaraka along with a great quantity of treasure taken from the palace of Bhaumsura. When Krsna returned to Dvaraka He duly married each maiden simultaneously in individual ceremonies, thus proving that He is no ordinary man, even though His earthly pastimes sometimes resemble human activities.

Attainment of love of Godhead means complete freedom from all other attractions (video)
Harinama in Cologne, Germany (Album of photos)
Tagged under: Nectar

One on One with Mahatma Prabhu (23 min. video)

‘Food for All’, a Hare Krishna charity based in…