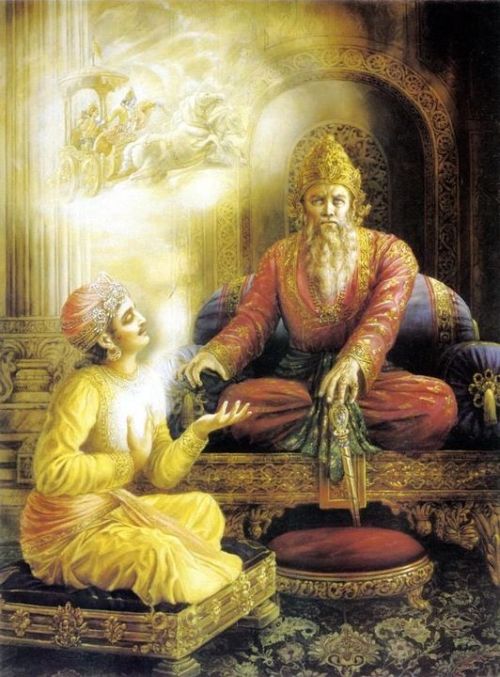 At the beginning of the Bhagavad-gita, Dhrtarastra says, “O Sañjaya, after my sons and the sons of Pandu assembled in the place of pilgrimage at Kuruksetra, desiring to fight, what did they do?” Dhrtarastra was blind from birth. Unfortunately, he was also bereft of spiritual vision. He knew very well that his sons were equally blind in the matter of religion, and he was sure that they could never reach an understanding with the Pandavas, who were all pious since birth. So there had to be a fight. However, because the battle had been arranged to be fought at Kuruksetra, a place of worship even for the denizens of heaven, Dhrtarastra became very fearful about the influence of the holy place on the outcome of the battle.
Sañjaya, understanding Dhrtarastra’s motive in asking about the situation on the battlefield, wanted to encourage the despondent king, and thus he assured him that his sons were not going to make any sort of compromise under the influence of the holy place.

Flat in Vrindavan for sale
We will be turning this amazing sample painting into mosaic work to place in the main front entrance of the TOVP
Tagged under: Nectar

Rathayatra in Lenasia in Johannesburg, South Africa (Album of…