Today it is 55 years ago that Srila Prabhupada set foot on US soil for the first time, having being brought there by a ship called Jaladuta. It was one of the many vessels of the Scindia Steam Navigation Company from Bombay, one of the oldest shipping companies in India, founded in 1919. At the time the company was lead by Srimate Moraji, named Jamuna, who joint the business at the tender age of 20 years and build it from humble beginnings to one of India’s largest with a fleet of 43 vessels and a combined deadweight of 550,000 ton.

By 1946 she was a part of the directors board and managing 6,000 employees. For her service to the industry she was awarded the Padma Vibhushan, the second highest civil honour in India. It was this lady that granted Srila Prabhupada a free travel, including meals, from Calcutta to New York on board the Jaladuta, a journey that started on 13th August – and terminated on 19th September 1965. For sure that she was no ordinary person, but an important part in Krsna’s plan. The Jaladuta itself was build by Lubecker Flenderwerke AG in Lubeck North Germany. This shipyard build a number of vessels for Scindia, as it was famous for its modern design, high mechanical and technical know how.

The Jaladuta was launched on 10th March 1959, an article on this event with original b/w photos was published by Dandavats on 6th March 2019 (See below). This ship had not only a modern look to it, but was equipped with a set of four ultra powerful diesel turbo engines, making it a top of the range cargo vessel in its days. By the time Srila Prabhupada set foot on the Jaladuta it had well dealt with all the child sicknesses of a newly build vessel and was the fastest and smoothest around. How Krsna hand picked the best for His devotee. The journey of the Jaladuta itself came to an end in 1983 when it was dismantled by S Jain Shipbreakers in Calcutta, work believe to have started on 30th April of that year. Why Scindia decided to scrap this vessel is unclear. One reason is a change in the shipping market, were suddenly bigger vessels with a larger tonnage took over and smaller ships like the Jaladuta were no longer relevant to the business model at the time. Another reason can be found on the website Shipspotting. com an article by Malcolm Cranfield. He concludes that the Jaladuta was involved in a collision between Kotka-Finland and Uddevala-Sweden in October 1982. And that this was the reason the vessel was then scrapped. Whatever the reasoning, the fact the Jaladuta was scrapped is stated in Marine News Volume 8 of 1983. This Srimad Bhagavatam of the shipping industry confirms the dismantling of the Jaladuta on page 449 of its August edition, this together with the sister vessels Jalakirti and Jalakrishna. The archivist of the now deduct shipbuilder Lubecker Flenderwerke AG has published a book earlier this year about the history of this German shipyard and mentioned therein the Jaladuta and Srila Prabhupada his journey on the vessel.

My research for the Jaladuta has now come to an end, a journey that started in 1995 in Karnua Bhavan Scotland. All photos and artefacts acquired during this voyage will be donated to The Bhaktivedanta Archives, the publishers of The Jaladuta Diary. 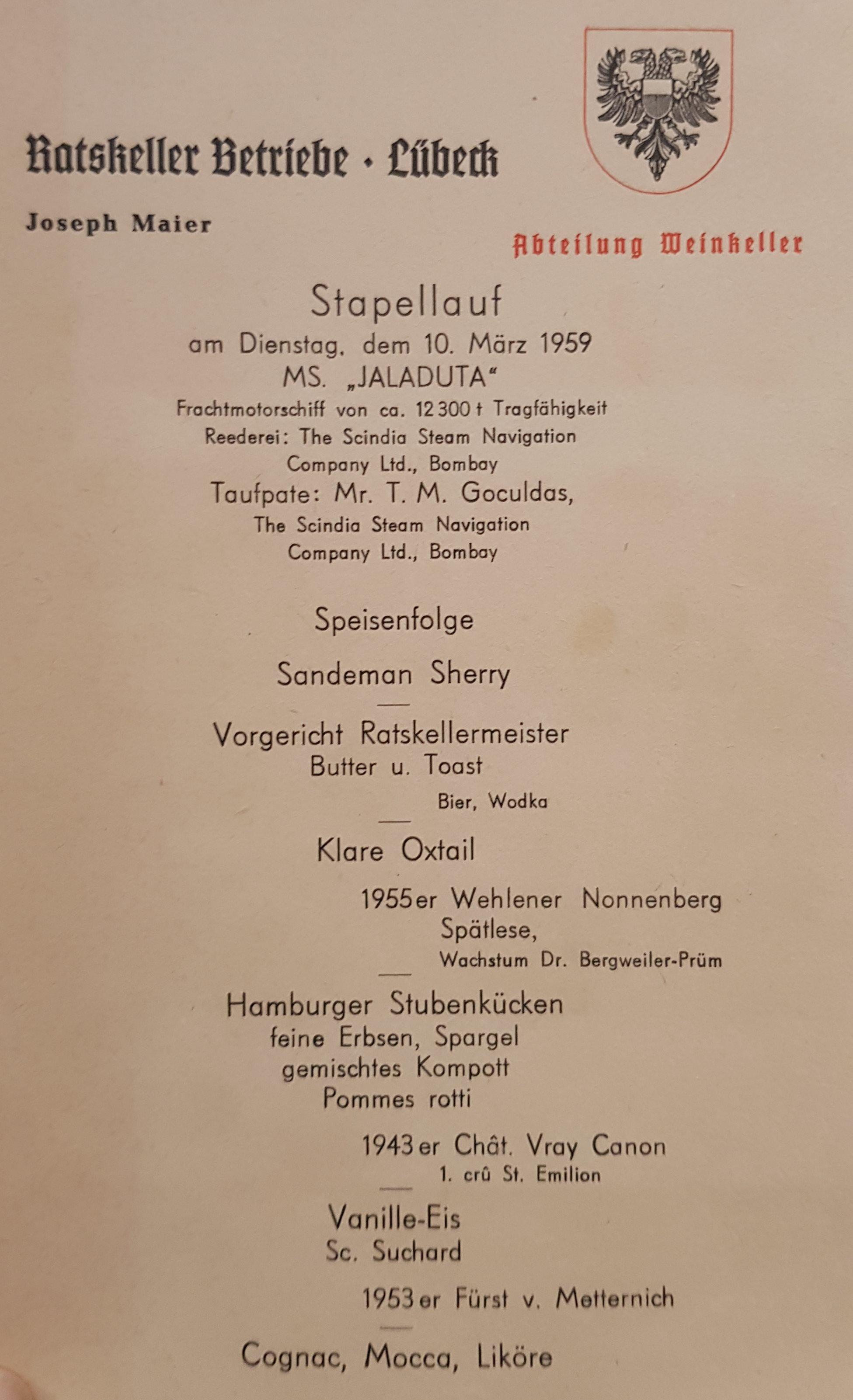 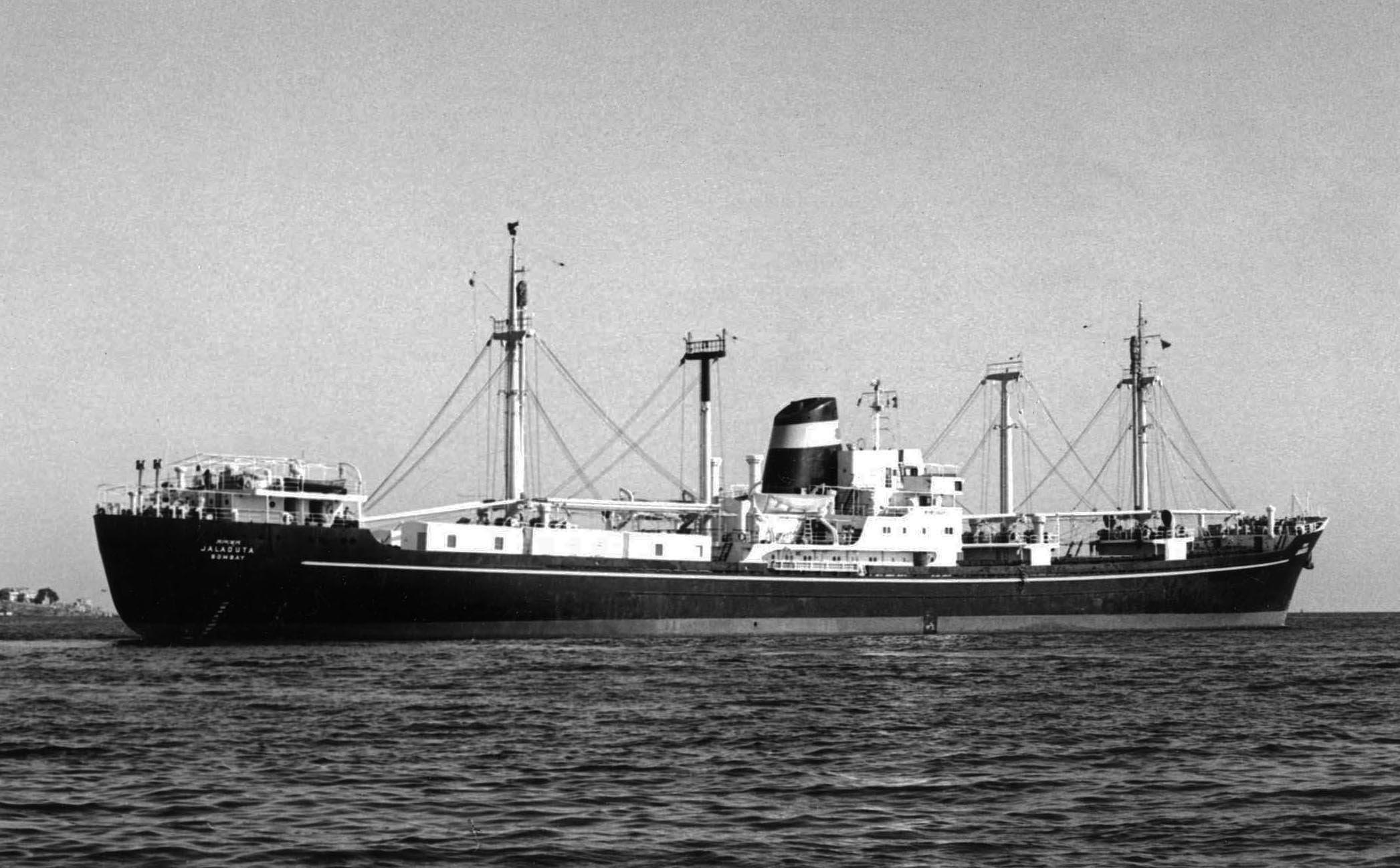 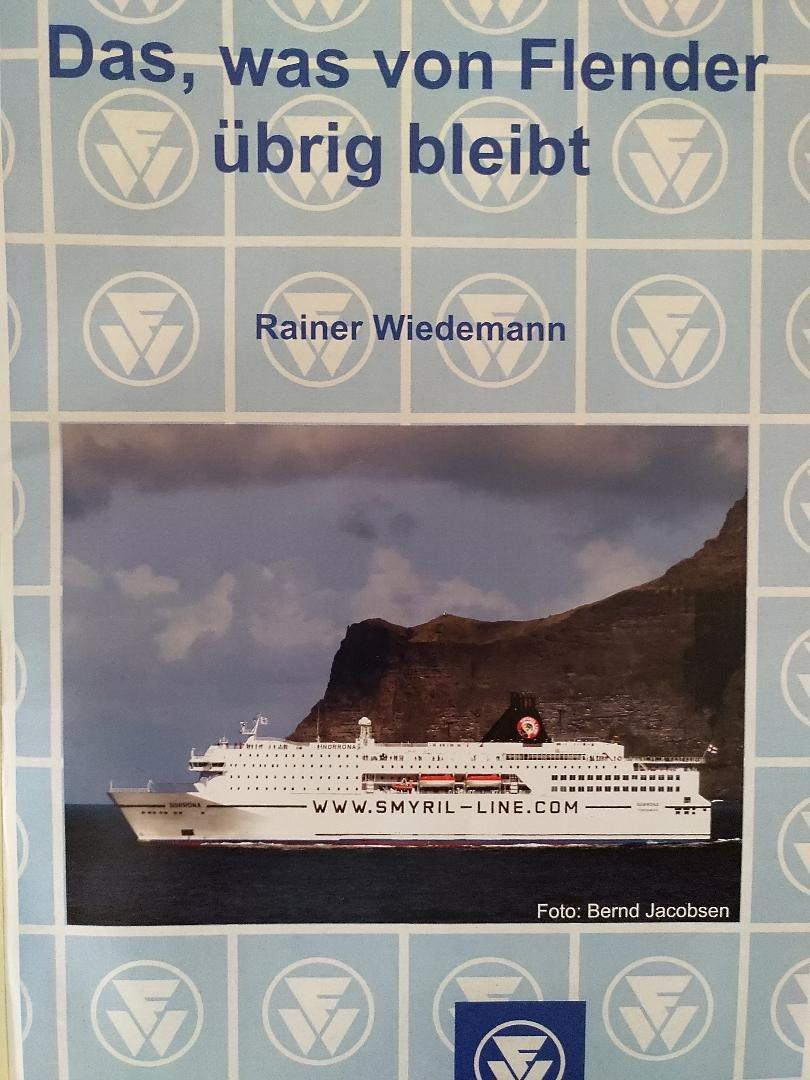 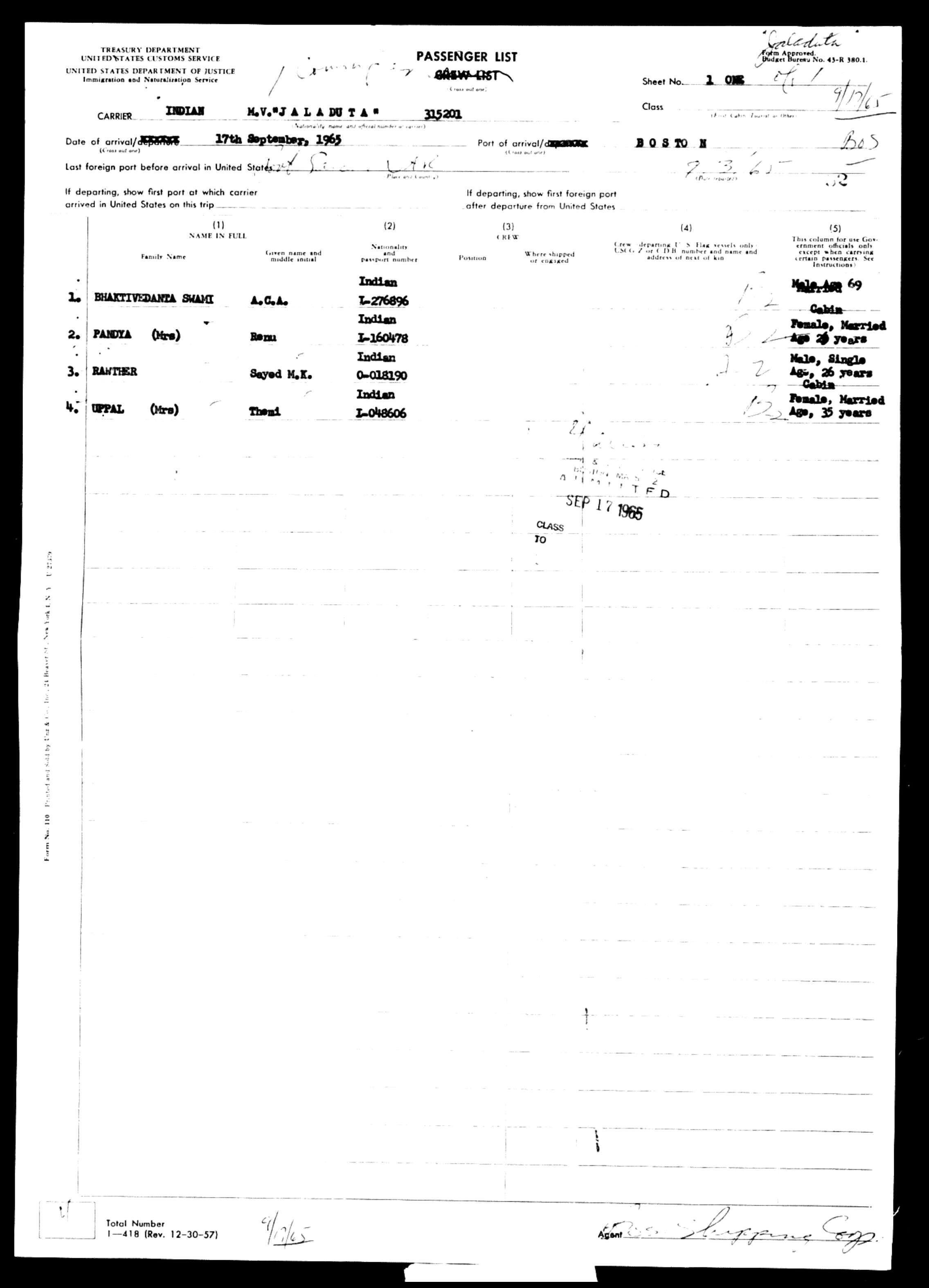 Jaladuta: a piece of its history revealed! (unseen photos)

Jaladuta: a piece of its history revealed! (unseen photos) 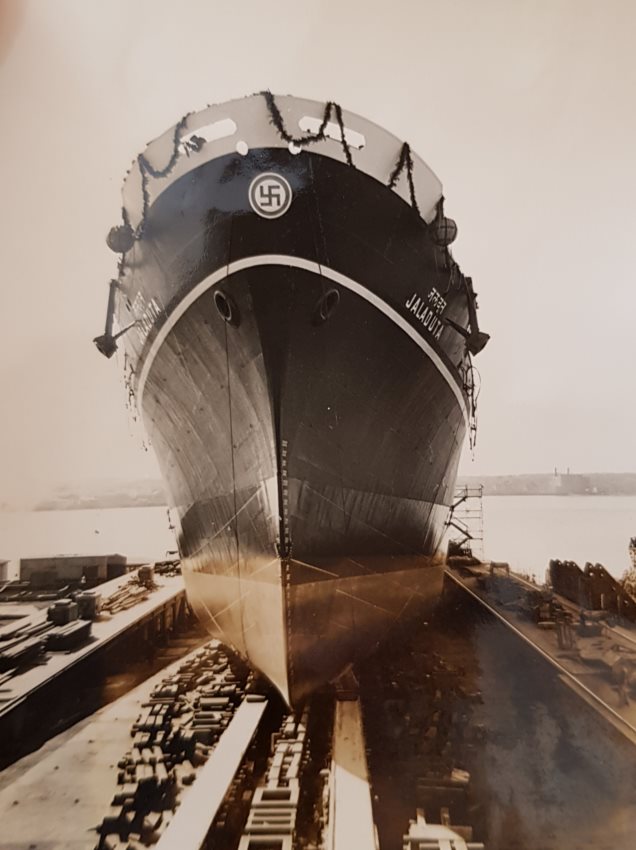 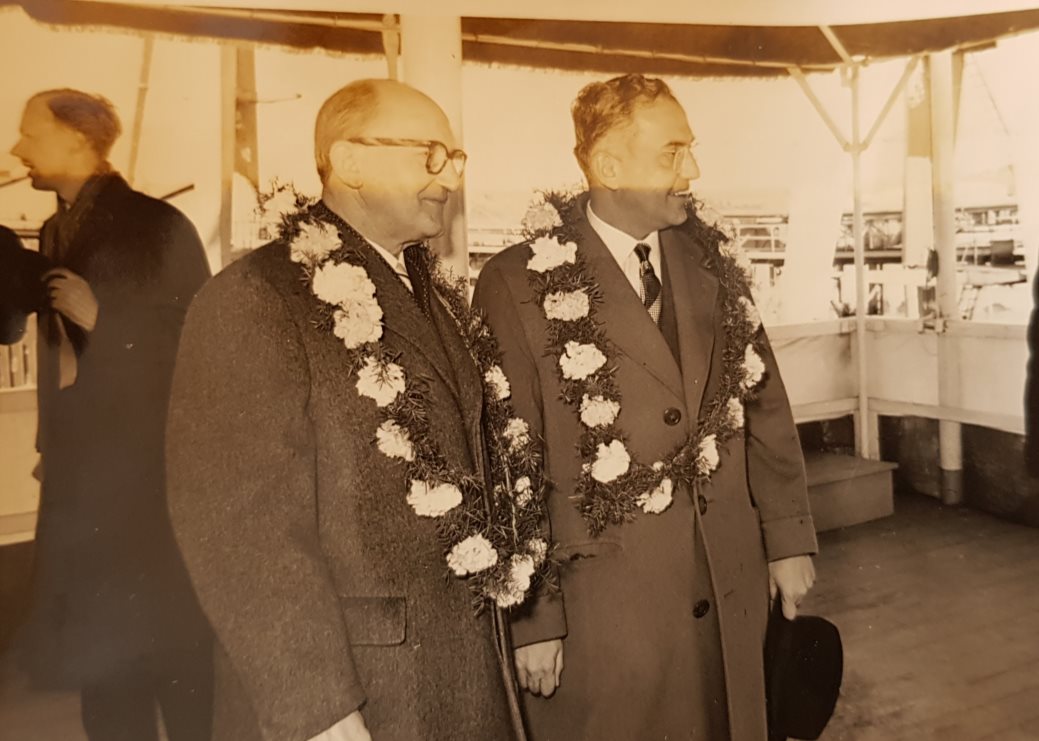 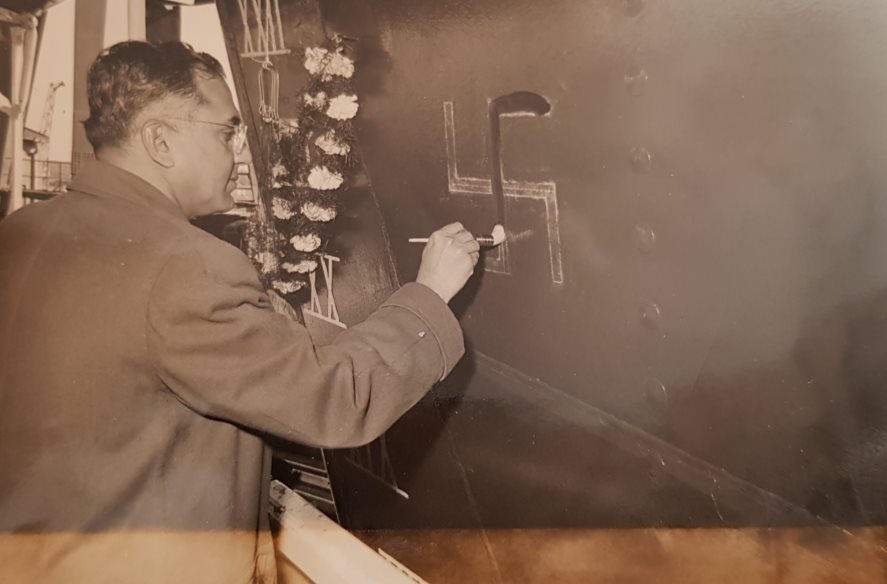 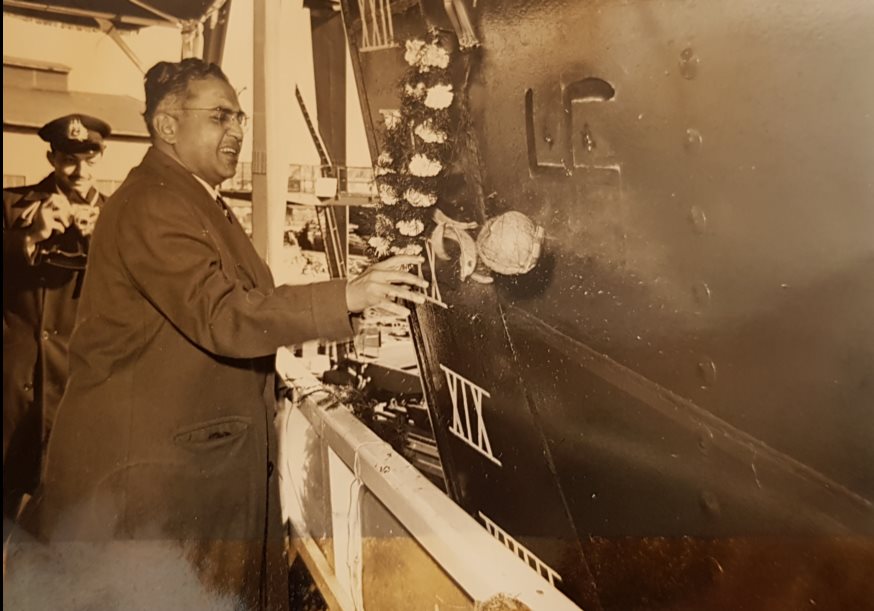 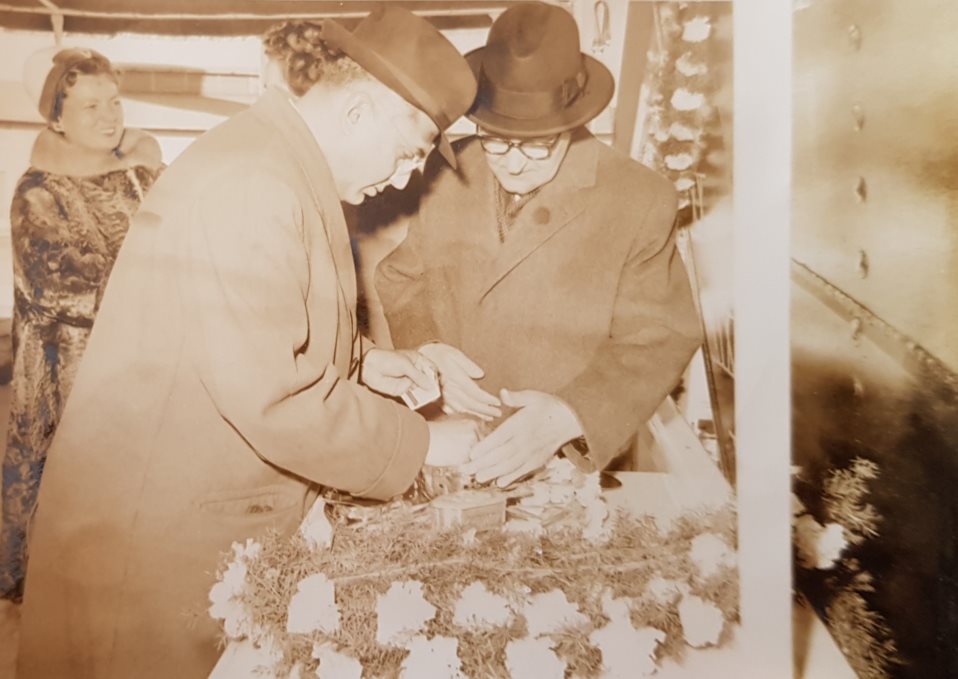 On the 10th of March it will be exactly 60 years ago, 10th of March 1959, that the MS Jaladuta was launched at its shipbuilding yard in Lubeck Germany. It is this vessel that brought Srila Prabhupada from Calcutta, via Boston, to New York on a journey that started on the 13th August 1965, in what became an astonishing journey and also the beginning of the International Society for Krishna Consciousness. This launch was organised by the Lubecker-Flenderwerke AG yard in Northern Germany at the completion of the ship. This event is standard in the shipbuilding industry and is likened to a christening name giving ceremony. The vessel receives its name and blessings from all present guests for its future journeys. An interesting fact is that Scindia named the majority of their vessels starting with Jala, Jalakrishna, Jalagopal, Jalakanta etc. The procedure is that the yard invites a prominent figure to speak the name of the vessel while simultaneously breaking a bottle of champagne over the bow. In this case the shipbuilders invited members of the board of Scindia, and instead of a bottle of alcohol, a blessed coconut was used to inaugurate the name giving ceremony.

After years of searching in Scotland and Europe, Scotland was the red herring as a SS Jaladuta was built there in 1927 by Lithgows Ltd in Port Glasgow also for Scindia. However I finally received these beautiful original black & white pictures documenting the event. The pictures display Shri Patel of Scindia and a representative of the Flenderwerke yard preparing the ceremonial fire. Shri Patel painting the Swastika on the bow of the vessel. The name giving ceremony and breaking the coconut by Shri Patel. The MS Jaladuta slides off the yard towards the Elbe-Trave Canal for its first test run. Shri Patel and the yard representative after the ceremony wearing garlands.

Unfortunately the Jaladuta was scrapped in 1983.

The advent of Lord Krsna (by HDG Srila Prabhupada)

The Importance of Vaishnava Seva