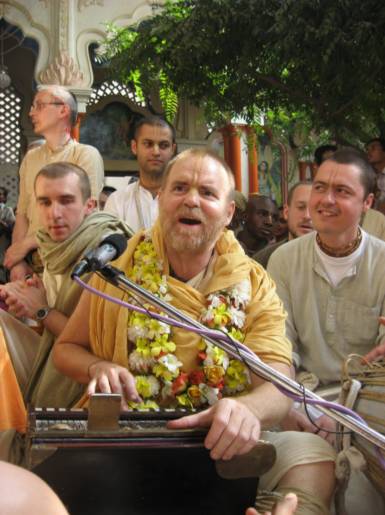 Sunday marked the festival of Vijay Dasami, a festival to celebrate Lord Rama’s victory over Ravana. But the devotees at ISKCON Vrindavan had one more reason to celebrate-the 24th anniversary of inception the 24 hour Kirtan program.

Originally instituted by Srila Prabhupada in 1975, the 24 hour Kirtan had sadly grounded to a halt until 1986, when it was revived by the legendary Kirtan leader- Aindra Dasa and Kirtan, the traditional way of calling out the names of God, has been going on ever since. The Kirtan program which had a very humble beginning has today become integral part of ISKCON’s preaching programs.

The atmosphere vibrated with a festive mood, but the memories of Aindra Dasa and his unexpected departure still lingered in the minds of many. The festivities began at 9 AM with the unveiling of a name plate acknowledging the dedicated service performed by Aindra Dasa over the decades. A permanent photo was engraved on one of the pillars of Krisha Balaram Mandir. Later on several first generation devotees shared their memories about the early days of 24 hour Kirtan and Aindra’s life.

The celebrations concluded with a traditional Gaudiya style kirtan led by ISKCON second generation devotees accompanied by several Mridanga’s, Kartals and other classical and native instruments.

“We had been working on this (anniversary) for sometime and wish to dedicat this to Aindra Prabhu who rendered selfless devotional service for years and inspired the whole world into the chanting of the holy name” said Gopal Dasa, Incharge-24 hour Kirtan program.

Vrindavan, the land of Lord Krishna, has been subjected to several changes over the years, but the 24 hour Kirtan has endured the test of time to remain true to the purpose for which it had begun- “To help generate a pure, spiritually surcharged atmosphere conducive to the advancement of pure devotional life”.

Latest GBC Thoughts On.....
Challenges to the Astronomical Paradigm