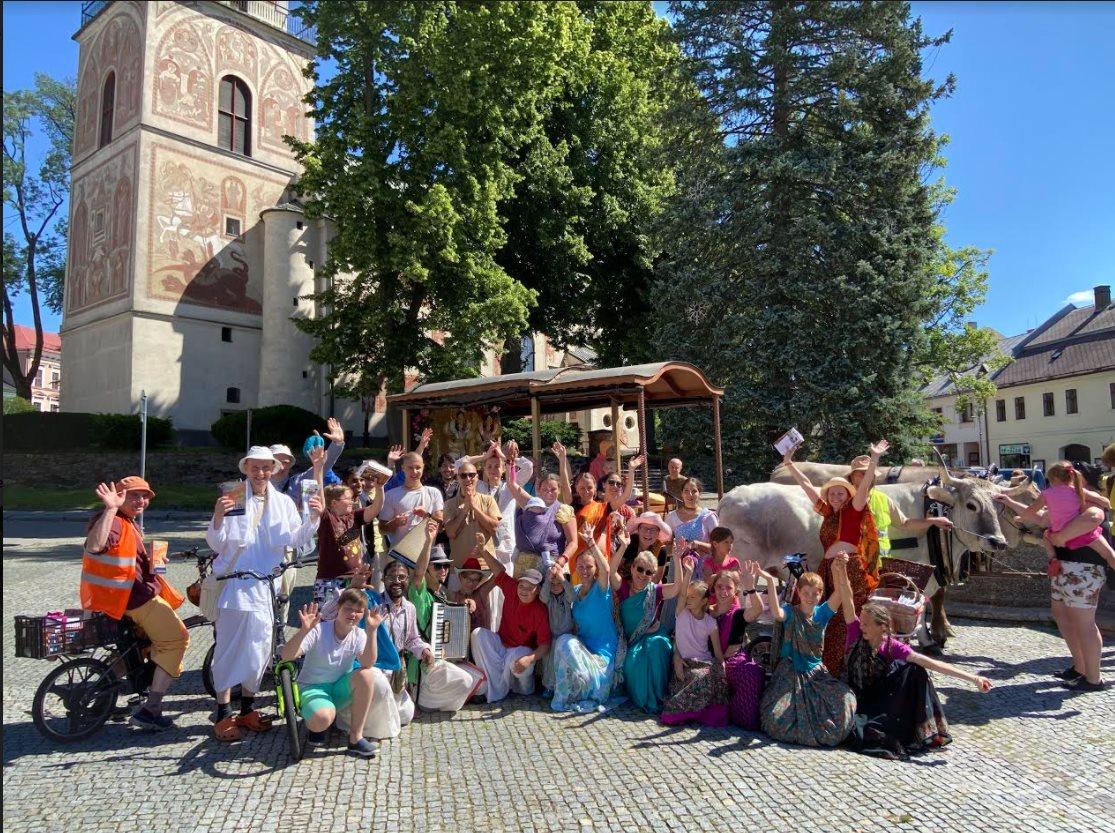 The dream came true! We hit the road for Czech Padayatra again, for the 27th time. It was an absolutely nectarian and merciful highlight of the year. We left the gray comfort zone of our average troubled daily lives – which are full of danger at every step. Danger in the form of forgetting Krishna, Srila Prabhupada’s mercy, and the ocean of mercy of traveling Lords Chaitanya and Nityananda. There are no glimpses of forgetfulness during Padayatra as all are protected here. Wandering from town to town, village to village – with continuous kirtan, book and maha prasadam distribution, we experienced real life – the glory of the sankirtan movement. It is a revitalizing aspect of our spiritual lives and everyone who participated in the Padayatra (with numbers varying from 30 to 70 devotees) could realize the incredible power of traditional ways of preaching. Just to walk and preach God’s glory is really glorious. The immense nectar we received can be hardly described. The mercy and ecstasy were flowing as the Ganga does during a flood. We were simply swimming in blissful kirtan from village to village. We were as gulabs floating in the sweet juice of the Holy Name. With every step, village, and evening preaching program – the nectar of the confidential service of Lord Gauranga and Lord Nityananda was thickening. Oh, what bliss! But it is now over, only memories have remained.

Not really, not only memories are left. There were 3,000 of Srila Prabhupada’s books distributed in over 20 cities and villages and many people who experienced the Hare Krishna movement in depth. What mercy! Just imagine: a small, sleepy, ordinary village suddenly wakes up to devotional service to the Lord. With harnima and Nitay-Gaurasundara Deities to take darshan of – many brought flowers for garlands, fruits, vegetables, and gave hay and bran for oxen. During the evening program they heard the philosophy, tasted delicious prasadam (fresh pakoras, raita, sweets, and maha prasadam), watched Bharatnatyam dance, a theatre performance about the liquid beauty, and many joined the kirtan. Nearly 1,000 children and adults took the opportunity for face painting (including tilak) during the entirety of the event. Oh, what a change for the village, for every conditioned soul, but for the devotees too. During the three weeks of Padayatra devotees shared the satisfaction of Gaura-Nitay in their hearts, creating a really fascinating atmosphere of cooperation and dedication. It was an enriching spiritual experience for the villagers when Padayatra visited their home place, and the devotees were extremely enriched with a deep experience of traditional preaching, solidarity and devotion.

Here is a short story: During the last days of Padayatra we walked quite a long route through a forest, with no living being to be seen. However, the kirtan in front of the bull cart was as enthusiastic as always. I was telling myself that at least the trees will benefit from it – it’s not my business to judge the situation, but rather to sing the Holy name from full lungs. Suddenly a car drove by, stopped ahead of us, and seemed to be waiting. As we were getting closer and closer, an elderly couple got out of the car and greeted us with real astonishment and folded hands. They took pictures, bought many books from devotees, walked with us for some time and also tried to sing with us. When they were passing by with their car again to continue on their journey, they waived and were full of bliss and happiness. The same day they came for our evening program. This year, due to Coronavirus circumstances the people were very enthusiastic. Often almost the whole village came for the evening program – and did not want to leave. They listened to the lecture carefully, happily took prasadam, and during the final kirtan – when mostly kids were dancing, they danced and sang with full enthusiasm in front of the bull cart. After that they expressed that it was their first contact with devotees, however the most important one.

Oh, now we can just water the nectar in our hearts. No need to only wait for the next Padayatra, it can be every day by sharing the mercy of Srila Prabhupada, the Holy name, and prasadam. If someone would need a strong boost in his/her spiritual life or would like to taste real ecstasy, please sign up for next year’s Padayatra. There are still some vacant spaces available.