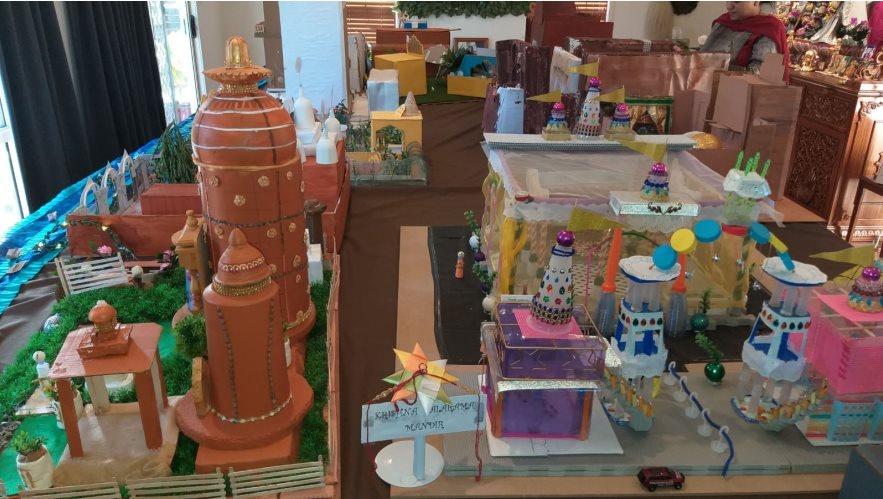 Gopal’s Glorious Gang (GGG) is a children’s club in Brisbane, Australia with about 80 children, from 4 to 16 years old. Our goal in forming this club is to help each child become a well-rounded human being through intellectual, personal and spiritual growth.

The children are divided into various classes based on age groups. The kids learn Vedic wisdom, play musical instruments, act in a variety of theatre performances, play Krishna conscious games, engage in kirtana, hari-nama, book distribution and much more.

Due to Covid-19 restrictions we currently hold classes via Zoom, with most students regularly attending.

‘Gopal’s Glorious Gang’ usually participate in drama performances during our major festivals, such as Janmastami. However, due to Covid-19 restrictions, this was not possible this year. They therefore decided to bring the holy land of Vrindavana, Krishna’s birthplace, into Brisbane! Vrindavanadarsanais the group’s offering to Sri Sri Gaura Nitai and Srila Prabhupada on the occasion of Janmastami 2020.

The children came up with the idea of building replicas of the airport at Delhi and train stations at Delhi and Mathura to show how devotees visiting from overseas reach the holy land of Vrindavana.

Upon arrival in Vrindavana, where do devotees first go? They always first visit ISKCON’s Krishna Balarama Temple, which is very dear to Srila Prabhupada, ISKCON’s Founder-Acharya. Inside the temple you can see Srila Prabhupada’s memorial, gift shop, prasadam stall, the famous tamal tree, parikrama path, temple hall with the three altars and Srila Prabhupada on his vyasasana.

Around 25 children from 9 to 14 years and their families worked on this project for nearly six weeks paying attention to every detail to ensure that the replica resembles the original as much as possible. The domes, the main entrance, the stairway, the courtyard, the altar, the memorial shrines, everything closely resembles the original temples in Vrindavana. The temples in the replica were built from re-cycled materials such as carboards, jugs, bottles, lamp-shades, thermocol, floral water-tubes, straws and were hand-painted.

The kids faced a lot of challenges. They have never been involved in a project like this before. Also most of them had never been to these temples before. They prayed to Srila Prabhupada to help them in their endeavour to please Krishna. The project gave the children an opportunity to serve together in small groups and be inspired after missing each other’s association during COVID -19.

The project was set up at the residence of a devotee a couple of days before Janmastami. The kids were engaged in kirtana, abhishek of the Lordships and games. The event concluded with prasadam.

Congregation devotees who visited the display were deeply touched by the project. They said that the children replicated the temples so well that they were able to identify the various temples easily without looking at the names. They requested us to reassemble the temples during Karthik so that they can do parikrama as no one from Australia can go to Vrindavan this year.

Events like these bring so much enthusiasm and create positive vibrations among us especially in the current tough times. We pray that we can engage the children in many more such projects in the years to come. The GGG team thanks all the children and parents involved in the project. Our special thanks to Vraja Dham prabhu for producing the photos and videos.