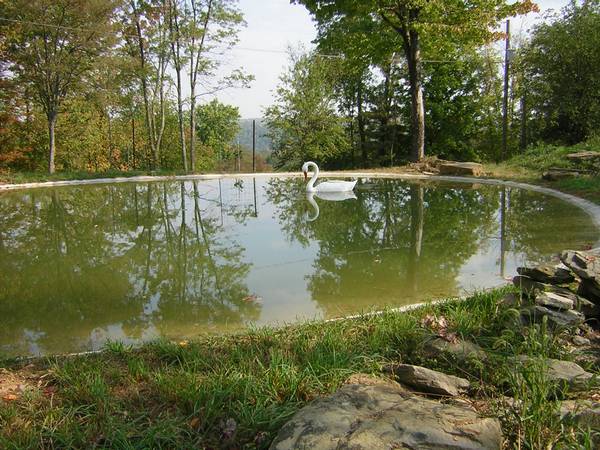 Following the disappearances of Lord Caitanya and Svarupa Damodara, Srila Raghunath dasa Goswami was so crushed that he decided to commit suicide. “Raghunath dasa planned to jump from the top of Govardhan Hill,” said Varsana Swami.

Raghunath dasa Goswami personally supervised the excavation of first Radha-kunda, and then Syama-kunda. The excavation work was completed in the year 1554. Later, in 1591, the king of Jaipur constructed a canal linking Syama-kunda with Lalita-kunda.

Raghunath dasa Goswami continued to perform his bhajana on the banks of the sacred kundas right up until his disappearance in the year 1583. He personally set the highest example of renunciation expected for all those who wish to imbibe the deeper internal spirit of bhajana.

Similarly to Raghnunath dasa Goswami, Srila Prabhupada envisioned that in the future, thousands of pilgrims would flock to New Vrindaban (USA) just as they were flocking to Vrindaban (India). Therefore, Prabhupada wrote to Hayagriva dasa in 1968 and advised him to “convert West Virginia into New Vrindaban. I understand the spot is very beautiful, and the hills may be renamed as New Govardhana. And if there are lakes, they can be renamed as Syamakunda and Radhakunda.”

In 1979, Varsana Swami personally excavated Radha-kunda and Lalita-kunda on a small piece of agricultural property. “I was in the plow department full-time,” said Varsana Swami. “By Lord Balarama’s mercy, I have always been engaged in both of Srila Prabhupada’s mandates for New Vrindaban. The first mandate is excavating and replicating the holy places. The second mandate is to practice agriculture as a step toward varnashrama.”

In 2001, the parcel of land on which Radha-kunda is located came into the possession of Sri Sri Radha-Gopinath, Who are worshiped by Varsana Swami. Thus, Varsana Swami became the custodian of Radha-kunda in New Vrindaban.

Lalita-kunda, a confidential place known only to the most intimate followers of Lord Caitanya, is located on an adjacent parcel. “I have been trying to acquire Lalita-kunda for Sri Sri Radha-Gopinath, but I have been unable to purchase the land from New Vrindaban,” said Varsana Swami sorrowfully.

After acquiring the land, Varsana Swami excavated Syama-kunda and built the model of a moon tower that would double as an altar for Radha-Gopinath. A moon tower, explained Varsana Swami, is an elevated place where the devotees go to watch for Vrindaban-Chandra, and where Radha and Krishna go to survey their subjects and property. “From the moon tower, the Deities are always casting down Their merciful glances,” he confided. “It is a very rewarding place to serve the Lord.”

Syama-kunda and the moon tower are not yet completed, due to lack of funding and lack of labor. “Syama-kunda is far too small, because I ran out of money for construction. Besides that, I am the only crew up here. I am the sole architect, excavator, mechanic, stonemason and pujari,” Varsana Swami explained.

The project received a boost just last week, when Varsana Swami received a $5,000 grant from New Vrindaban for construction of the moon tower. He still requires approximately $3,000 to complete the landscape around Radha-kunda and Syama-kunda, including a parikrama path, stonework, and Vrinda devi’s gateway. He also requires the assistance of a devotee who can help with various aspects of the project. “The bank of Syama-kunda is the base of the moon tower, so both projects should be done simultaneously,” said Varsana Swami.

This unique opportunity to render service at Radha-kunda and Syama-kunda is available to everyone, by the mercy of His Divine Grace A.C. Bhaktivedanta Swami Prabhupada, the Founder-Acarya of the International Society for Krishna Consciousness (ISKCON). It is well known that service rendered in Vrindaban is 1,000 times more potent than service rendered elsewhere, and that Prabhupada also said New Vrindaban is non-different than Vrindaban. Varsana Swami’s motivation for the project, however, is different. “Our acaryas tell us that Radha-kunda and Syama-kunda are the favorite pastime places of Radha-Gopinath,” he says. “Their happiness is all that matters.”

Notably, Sri Sri Radha-Gopinath are the Deities of prayojana. Raghunath dasa Goswami, the prayojana acarya for followers of Lord Caitanya, lived on the bank of Radha-kunda. Thus, there is confidential relationship between Radha-Gopinath and Radha-kunda which is understood only by one who renders service at Radha-kunda.

For more information about this project, contact VarsanaSwami@gmail.com or visit http://www.dhamseva.com/