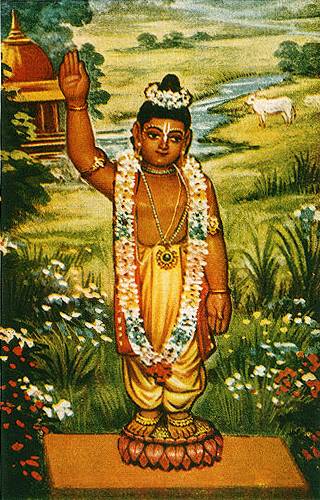 In this essay, we will examine the mathematics of the Supreme Lord’s horoscope as seen through the lens of Gaudiya Vaishnavism. It will be helpful if the reader has a working knowledge of the science of the panchang and for this they may refer to Patita Pavana das Adhikary’s article of 3 Jan 2010 entitled “Is Astrology Useful in Krishna Consciousness?” (http://www.dandavats.com/?p=8025).

In the following essay we will try to offer a ready reckoning into this daunting concept of the divisions of a Vedic day as understood through mathematical and astronomical perspectives. First, let us review the crucial verses given by the king of Vaishnava poets, Shrila Shri Krishnadas Kaviraja Goswami, from Shri Chaitanya Charitamrita Adi Lila.13.88-89 as translated by Shrila Prabhupada:

“Nilambara Chakravarti (the grandfather of Shri Chaitanya Mahaprabhu) then did an astrological calculation and said that in that month, taking advantage of an auspicious moment, the child would take birth. Thus in the year 1407 of the Shaka Era (A.D. 1486), in the month of Phalguna (March-April), on the evening of the full Moon, the desired auspicious moment appeared.”

We give the transliteration of the next verse (90), which is the famous one that establishes the exact lagna of the chart, erasing any doubts.

“According to the Jyotir Veda, or Vedic astronomy, when the figure of the lion appears both in the zodiac and the time of birth [lagna], this indicates a very high conjunction of planets, an area under the influence of shad-varga and ashta-varga, which are all auspicious moments.”

The shad-vargas or “six divisional charts” are the rashi, hora, drekkana, navamsa, dwadasamsa and trimsamsa. These are the horoscope itself, then each house of the chart divided into 2, 3, 9, 12 and 30 parts respectively. The ashta-vargas are a means by which planetary strengths are measured.

In the Bhaktivedanta Purport to verse 89, Shrila Prabhupada states,

“Shrila Bhaktivinoda Thakura, in his Amrita-pravaha-bhashya, has presented the horoscope of Shri Chaitanya Mahaprabhu as follows:

Upon first seeing this mysterious table in 1976, I could not understand this baffling array of numbers. Then in 1980 a fellow devotee sent me a book from India in which I found the key to understanding those elusive figures. That book is the Brihat Jatakam of Shri Varaha Mihira. Varaha Mihira was one of the “nine jewels” in the court of the great King Vikramaditya who flourished some five centuries after Buddha. He was a renowned astronomer, mathematician and astrologer, a pandit and vidwan whose fame lingers to this day. It is stated on pp. 35-36 (of the English edition of his book by Swami Vijanananda):

Shaka 1407 / 10 / 22 / 28 / 45 or year / month / day / dandas / and palas of the 23rd day. Note that the figure 22 indicates that 22 days had passed, and that the 23rd day was now in effect. This means that Lord Chaitanya Mahaprabhu was born on the 23rd day of the 10th lunar month (Phalguna) of the Shaka year of 1407. According to our present calendar, the Supreme Lord advented Himself on 18 February 1486. His time of birth is also given as 28 dandas and 45 palas after sunrise. When calculating charts of the Fifteenth Century we need to add 9 days to get the exact astronomic data due to changes in the Christian calendar since the time of Mahaprabhu.

According to Vedic astrology, one day and one night or–24 hours in time–are divided into 60 dandas.

This means that the time of the Lord’s Divine Appearance was 11 hours and 30 minutes after sunrise.

Between sunrise and sunset times are 11h30′ plus the sunrise time equals 18h58′. Shri Amrita-pravaha-bhasya gives the elapsed time from daybreak as 11h30m after sunrise. This means that Lord Chaitanya was born at 17h58 LMT according to His Divine Grace Shri Shrimad Bhaktivinoda Thakur.

In the table below the planetary positions are given in degrees, rashis and (nakshatras). Note that the Vedic system is to arrange the planets in the order of their ruler ship over the week-days or varas beginning with the first day of Suryavara and ending with the seventh day, Shanivara. Calculations are as per Shri Jagannath Hora software.

Next we examine more closely the mysterious table of numbers from the Amrita-pravaha-bhasya. That baffling table again:

Which we understand as:

So, reading the first column from the left, we find that the number 7 means the 7th day of the week or Saturday. Next, below that, 15 refers to the 15th day of the waxing Moon or the full Moon. Below that 40 dandas; and (below that) 13 palas equals the time that has elapsed on that full Moon day.

The last column indicates the nitya-yoga number 8 which is known as dhriti yoga (one of the 27 nitya-yogas of the panchanga, or tithi-vara-nakshatra-nitya yoga-karana)) and the numbers below that indicate the time that remains for that nitya-yoga to elapse in dandas and palas. If we multiply 38 x 24’ = 912′ or 15h12 and 40 x 24” = 960” or 16’, and add the two results we have 15h28 for the time in dandas and palas for the duration of the dhriti yoga.

“The Lord’s lagna in Leo is extremely powerful due to its being occupied by a full Moon and Ketu aspected by its lord (the Sun) as well as Saturn, Jupiter, Mars and Rahu. As indicated in the above verse by the words uccha-graha-gana, all the planets were powerful (at their highest point). Note that exalted Mars, the lord of the houses tenanted by Saturn and Venus, adds strength to these two planets. In turn, Saturn boosts the Sun in Aquarius which aspects the Moon and Ketu in Leo lagna. Well-placed Jupiter in his own house causes a clear neecha-bhanga to Mercury in Pisces (cancellation of debility). Jupiter is in a kendra from Mercury who is the ruler of his (Mercury’s) own sign of exaltation. Thus every house has become strengthened by the uccha-grahas (planets in exaltation) in this powerful horoscope as described by the Gaudiya Vaishnava acharya and biographer Shrila Krishna das Kaviraja Goswami.”

Below is the horoscope of Lord Chaitanya Mahaprabhu according to the descriptions of Shri Chaitanya Charitamrita. 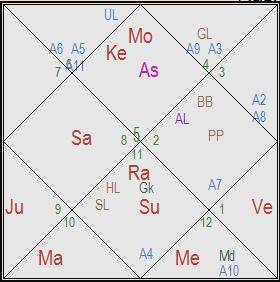