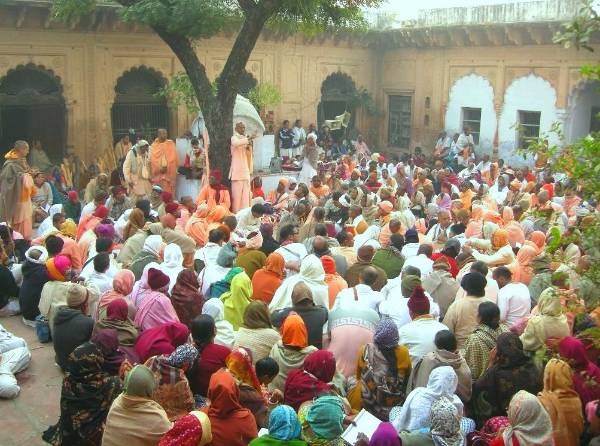 By Lakshman (das) Vrindavan (IN)

For photos please see the link…….

In the Adi Varaha Purana it is stated “The fourth forest is Kamyavan, the best of all. O goddess, a person who goes there is glorified in My abode.” Kamyavan fulfills all desires By bathing here one is freed from all distress. In the Skanda Purana, Mathura Khanda it is said: “O king, next is Kamyavan, where Lord Hari stayed in His childhood. Simply by bathing here, any person will attain all his desires.”

Kama means “desire” and Van means “forest”. The Adi Varaha Purana states that this is the forest where all the desires of the devotees are fulfilled. “In this Kamyavana, Krishna performed enchanting pastimes. Here you will be able to take darshana of many Kundas and other Lila Sthalies. I cannot even describe in writing all the sacred tirthas found at Kamyavana.”
(Bhakti-ratnakara, Fifth Wave)

A brief description of Kamyavan Parikrama :

CARAN PAHADI: This hill is on the left of the path when we travel from Bilond to Kamam. The left and right footprints of Lord Sri Krishna can be seen atop the hill on a large stone here. Once while Krishna and the cowherd boys were grazing the cows and calves, they were indiscriminately scattered in all directions. As the evening grew near, Krishna and His friends were concerned. Krishna closed His eyes and smilingly played His flute in sweet melody and hearing the call, the cows and calves immediately ran to Him. The sheer ecstasy of the flute music melted the stones here and thus impressions of His lotus feet were casted on the rocks.

GAYA-KUND: Gaya Kund is on the western outskirts of the town of Kaman. Nanda Maharaja offered oblations to his forefathers here. This is believed as the Gaya Tirth in Vraj.

KAMAN: This town is 22 km north of Deeg and 14 km south-west of Nandgaon. It is located in Kamavan. In this town, there are many temples, kunds and places where Krishna displayed His sweet pastimes. Kamavan is one of most important and beautiful forest among the twelve forests of Vraj. The Pandavas lived here for some time in this forest during their vanvas (exile to forest).

VIMAL-KUND: On the south-east of Kaman is Vimal Kund. This is one of the most beautiful and important kunds of Vraj formed by the loving tears of the daughters of King Vimala. While Krishna was swimming here, the cows grazed on its banks.

GOVIND & VRINDAVEVI MANDIR: This temple is located at the centre of the town of Kama and the Deities of Govind and Vrindadevi are installed in it. This is the most famous temple of Kama.

The deity of Vrinda Devi was originally installed by Vajranabha 4,900 years ago. This deity was rediscovered by Rupa Gosvami on the bank of Brahma Kunda, in Vrindavan. He installed the deity in a small temple next to the Radha Govinda Temple. Later, due to fear of an attack on the temples in Vrindavan by the Yavans, the king of Jaipur decided to take Vrinda Devi, Radha Gopinatha, Radha Madana-Mohan, and Radha Govinda to Jaipur. But when they reached Kamyavan, Vrinda Devi refused to go any further.

GOPINATH MANDIR: This temple is also located at the middle of the town of Kama and in it the Deity of Sri Radha-Gopinath is installed. The King of Varddhaman built the current temple.

CHAURASI KHAMBHA: The celestial architect Vishvakarma built this palace for Maharaja Yudhisthira and the Pandavas lived in it during their vanavas.

DHARMARAJ MANDIR: This temple is dedicated to Yudhisthira, the son of Dharmaraj. In it is a beautiful deity of the son of Dharma. This located close to the western side of the Kameshwar temple.

Five thousand years ago the Pandavas were living peacefully here at Kamyavana. One day Durvasa Muni came with his 60,000 disciples. Durvasa Muni told Draupadi that he and his disciples were very hungry and that after returning from taking a bath, he expected to be fed a feast. He then went to take bath in Vimala Kunda. Draupadi had a cooking pot that could provide unlimited food for any number of people, but it could only be used one time in a day. The Pandavas had just finished a feast and Draupadi had just finished washing the pot, when Durvasa Muni arrived.

Draupadi, not knowing any other solution to the problem, immediately though of the lotus feet of Krishna and prayed to Him for help. Immediately Krishna appeared and told her that He was very hungry and would like something to eat. Draupadi said that she had nothing. Krishna asked her to bring her cooking pot. Krishna then found one-minute particle of food left in the pot. Krishna then ate this particle of food and then said I am fully satisfied.

KAMESHWAR MANDIR: Kameshwara is one of the famous Shiva-lingas in Vraj and Vajranabha established it 5000 years ago. The word kama means “desires” and Lord Shiva is called Kameshwar, because he fulfills all desires. This temple is located on the east of the town.

PANCA-PANDAVA MANDIR: In this temple, the deities of Draupadi and the five Pandavas are installed.

At this place Yamaraja (Dharmaraja), disguised as a sage, asked King Yudhisthira four questions. Yudhisthira had gone out to find his four brothers. They had not returned for a long time, after they had gone out to find some water. When his four brothers had reached this kunda, they had been told by Dharmaraja that they could only drink the water of this kunda, if they could answer four questions correctly. None of them were able to do it, but being extremely thirsty they had tried to drink the water any way and had died.

ASHOKA VATIKA: On the west of Yashoda-kund is Ashoka-vatika. It represents the Ashoka garden in Lanka, where Sita Devi was held captive by Ravana.

LANKA: This is located on the south of Rameshwaram.

SURABHI KUND AND PRABODHANAND SARASVATI’S BHAJAN KUTI: This is approximately 2 km north-west of Kama. This is a wonderful pond with blossoming lotus flowers.

KALAVATA: The Kalavata village is 3 km north of Kamavan and it has a beautiful temple.

PHISALINI-SHILA: Outside the Kalavata village on the peak of Mount Indrasena is this place located. Here, on the side of the hill is a long and smooth rock slide, where Krishna and the cowherd boys played sliding downhill.

BALARAM CARANCINH: On a rock located north of Kalavata village, the footprint of Lord Balaram can be seen. In the raging war between Lord Krishna and Vyomasura, the whole of earth started to tremble. To stabilize the earth, Lord Balaram pushed her with His leg and that footprint is seen on the rock.

VYOMASURA GUPHA: On a hill north of Kalavata village is the cave of Vyomasura. Vyomasura stole the cowherd boys and concealed them in this cave. To rescue the boys, Lord Krishna fought with Vyomasura here. On the rock atop the hill above the cave has footprints and handprints of Lord Krishna. A rock nearby shows imprints of marigold flowers and Kaustubha jewel fell down from sky during the fight.

BHOJAN STHALI: On the east of Kalavata village is Bhojan Sthali. Crossing the stream from Vyomasur-gupha, or moving straight from Kama, this place can be accessed. This is where Krishna often took lunch with the cowherd boys. On a rock here, the imprints of the bowls and plates Lord Krishna used are still secured.