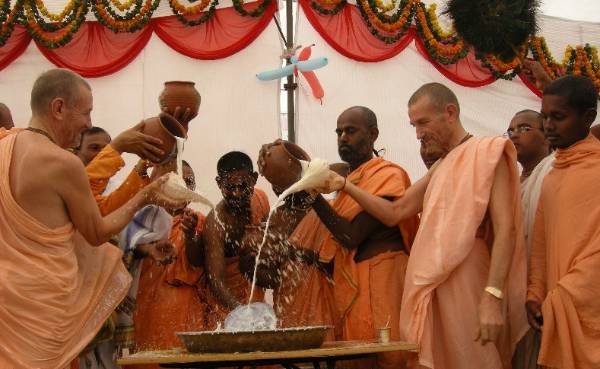 For photos please see the link…..

Varsana is sweetened by the childhood pastimes of Srimati Radharani. This is where Srimati Radharani lived and had many pastimes with Sri Krsna. The Parikram is 7 km around Barsana Dham. Lord Brahma desired to perform some devtional service to the divine couple so he manifested himself as the four peaks seen there. It is located within the Vrindaban forest, which extends 32 miles, from the town of Vrindaban to Nanda-grama and Varsana.

KANWADA: This village is approximately 3 km east from Kama. Here, Mother Yashoda pierced the ears of Krishna to wear Him earrings. In this village, Kanva Muni also lived for some time.

KADAMBAKHANDI: The kund of Kadambakhandi is 3 km from Kanwada and approximately 6 km east of Kama. On the bank of the kund, a kadamba tree and tamala tree stands intertwined, which is believed to be Krishna and Radha. This is a place of rasa-lila for the Lord.

PACHOLA: This is a village about 200 metres north of Kadambakhandi. The village is also called Naga Baba Gaon.

SUNAHARA: This village is 2 km north of Kadambakhandi on the Parikrama Marg. Sunahara is the village of the twin sisters Rangadevi and Sudevi, two among the eight sakhis of Radharani.

CHITRASHILA: This is located on the south-west of the Unca village. Here is the imprint of Radharani’s veil on a rock. Atop the hill, footprints of the Gopis can also be seen.

UNCA GAON (LALITA GRAM): This is 2 km north-west of Barsana. This is the village of Lalita sakhi (Gopi friend), one among the eight sakhis of Radharani. When Radharani became desperate feeling separation from Krishna, Lalita sakhi pacified Her. Atop a hill here, a temple exists for Lalita sakhi, wherein the Deities of Radha-Krisha and Lalita sakhi are established.

NARAYAN BHATT GOSWAMI’S SAMADHI: Towards the south close to Unca village is the samadhi of Narayan Bhatt Goswami. He was a contemporary of the six Goswamis, who established several temples in this area including the Larili Lal temple at Barsana. He compiled the book of Vraj-bhakti-vilas, a descriptive guide for Vraj.

BARSANA: The village of Barsana is 8 km south of Nandgaon. This is the village of Vrisabhanu Baba. Radharani grew up at Barsana and engaged with Krishna in many lilas.

VRISABHANU-KUND: This kund is on the eastern part of Barsana village and it is named after Vrisabhanu.

SANKARI KHOR: On the eastern part of Ciksauli village is the Sankari-khor. This is a narrow pathway between two hills dividing the hills of Lord Brahma and Lord Vishnu. Here, Krishna asked for milk and yogurt from the Gopis.

KRISNA KUND: On the north-western part of Ciksauli village is Krishna-kund located in the midst of a group of hills in Gavahar forest. The pond also known as Gavahar-kund is covered by trees.

MOR KUTI (MAYURA KUTI): This is on the peak of a hill east of Gavahar forest. Here, a dancing contest was held between Krishna and a peacock. There is a temple here and a painting made by a blind saint is established in it.

MANGARH: On the west of Gavahar forest is Mangarh. Atop the small hill is the Manmandir, where Radharani felt depressed and dejected.

KUSHAL BIHARI JAIPUR MANDIR: This temple is located on a hill top south of Laladi Lal Mandir. This is a large temple built by a King of Rajastan.

LADALI LAL MANDIR: This is the main temple at Barsana and in it the Deity of Laladi Lal is established. Srimati Radharani and Krishna are lovingly called Laladi and Lal respectively.

VILAS GARH: This is one of the four peaks of Brahma-giri. Here Radha and Krishna enjoyed many pastimes.

PILI POKHAR: Pili Pokhar is a beautiful lake in the north of Barsana. Mother Yashoda loved Radharani very much and she wanted Krishna to marry Her. One day when Radharani arrived at Nandgram, Mother Yashoda applied turmeric paste on her hand and traditionally it showed the sign of willingness to engage her in marriage. Seeing the yellow hands, Radharani felt ashamed and she went to this water reservoir and washed Her hands. The water in the pond too then turned yellow and therefore this water reservoir is called Pili Pokhar.

KISHORI KUNJ: This is located near to Pili Pokhar on its north-west. A saint called Bhajan Parayan lived here.

PREM SAROVAR: Prem Sarovar is located 1 km north of Barsana. Once, Krishna and Radharani were sitting together. A bee zoomed near Radharani menacingly. Krishna asked a Gopa friend to chase it away. When the friend drove the bee away and returned, he said, “Madhu is gone.” Madhu means bee and is the name of Krishna as well. Radharani felt Krishna went away and she began to cry. Seeing Radharani’s cry, Krishna also cried, and from the mix of their tears of love, the Prem Sarovar pond emerged.

SANKET: This village is located on the Parikrama Marg exactly midway between Barsana and Nadgaon, and here is the temple for Sanket Devi. When Krishna went to herd the cows and Radharani went to pick flowers, sometimes they met here and swung on a swing. The six Goswamis performed bhajan here.

UDDHAV KYARI: This place is on the south-east of Nandgaon. Uddhava met the Gopis here when Krishna sent him to deliver a message to them. Srimati Radharani exhibited here maha-bhava, the utmost symptoms of ecstatic love.

NANDBAITHAK: On the south of Nandgaon is this place. Nand Baba met his friends here.

YASHODA KUND: On the south of Nandgaon and on the west of Nandbaithak lies Yashoda Kund. This is the kund of Mother Yashoda and near to it is a large goshala.

KRISHNA BALARAM MANDIR: This temple is on the top of Nandishwar hill. This is the main temple of Nandgram, where the Deities of Krishna, Balaram, Nanda, Yashoda and Radharani are installed. The palace of Nanda Maharaja was here.

NANDISHWAR MANDIR: This Shiva-linga installed by Vajranabha 5000 years ago is in the premises of Krishna-Balaram Mandir. Lord Shiva resides here and always engages in bhjan. Lord Shiva once came to see Lord Krishna’s child form. Seeing his ugly appearance with ashes, bones, and snakes, Mother Yashoda refused to permit him in. Unsuccessful, Lord Shiva went to the nearby forest and meditated on Krishna. At home, child Krishna started to cry aloud non-stop. The worried Yashoda thought it must the result of refusing permission to the mystic yogi. She then sent many people to locate the yogi. When Shiva returned, Krishna immediately stopped crying and smiled. Thereafter, whenever Lord Shiva wanted to see child Krishna, he arrived and played his drum, and Mother Yasoda took him in and showed the Divine Child.

NRSIMHA VARAHA MANDIR: This temple is at the foothills of Nandgram. Because of demoniac attacks on the inhabitants of Vrindavan, Nand Maharaja took the advice of Garga Muni and began to worship Lord Nrsimhadeva. The Deities here are installed by Nanda Maharaja.

PAVAN SAROVAR: On the north of Nandagaon is the Pavan Sarovar. This kund is dug by a Gopa named Pavan. Mother Yasoda bathed Krishna here and this is one of His favorite ponds.

SANATANA GOSWAMI’S BHAJAN KUTI: On the southern bank of the Pavan Sarovar is the bhajan kuti of Sanatana Goswami. Lord Krishna gave darshan to Sanatana Goswami and said that the Deities of Nanda Maharaja, Mother Yashoda, Krishna and Balaram are shielded in a cave. Sanantana Goswami took these Deities and installed in a temple atop the Nandishwar hill.

TER KADAMBA: This is a small forest close to the north of the Asheshwar Mahadeva Mandir. Often Lord Krishna climbed on a kadamba tree, blew His flute, and attracted the cows. After grazing, Krishna counted the cows and took them back.

RUPA GOSWAMI’S BHAJAN KUTI: Rupa Goswami lived here for some time. Rupa Goswami sat down beneath the shade of a kadamba tree here and wrote his books.

YAVAT: The Yavat village is located 2 km north-east of Ter Kadamba. This is the village of Radharani where Abhimanyu, the husband of Radharani, and his family lived. This is also the village of Jatila and Kutila. A banyan tree stands here and below it Lord Krishna decorated the legs of Radharani.

KOKILAVAN: Kokilavan is a forest 3 km west of Yavat. Here, sometimes Krishna cried out like a cuckoo bird and attracted the Gopis. A beautiful temple of Radha-Krishna is here and near to it is a temple for Shanidev. On special Saturdays, festivities are organised here.

KHADIRA VAN: The forest of Khadiravan is located 8 km from Barsana on the Barsana-Chata Marg. This village is also called Khayara. Here is the bhajan kuti of Lokanath Goswami. This is one of the twelve forests of Vraj. Krishna delivered Bakasura in this forest.

NOTE: On the disappearance day of Srila Prabhupada, the participants will visit Khadiravan by the parikrama bus.

Here, Lord Krishna manifested the milky ocean, expanded Himself as Ananta Shesa, and transformed into Ksirodakasayi Vishnu. Srimati Radharani became the beautiful Laksmi Devi and She humbly bowed down her head and massaged the lotus feet of Lord Vishnu.

BAITHAN CHOTI: This village is approximately 2 km north of Badi Baithan. Parikrama will visit this village and move towards Caran Pahadi.

CARAN PAHADI: Approximately 1 km north of Choti Baithan is Caran Pahadi. There are footprints of Krishna and His animals on the rocks here. Once, Krishna and the cowherd boys climbed the hill to watch the grazing cows. Lord Krishna stood under a tree and began playing His flute. Soon the people and animals in the surrounding area gathered atop this hill to listen. The mountain melted listening to the flowing melody of His flute music and thus the footprints of Sri Krishna and those around Him are imprinted on the rocks here.

KOTVAN: This is a village on the Delhi-Agra National Highway.

KARAMANA: While moving ahead through the Delhi-Agra National Highway towards Shesashayi, this village will come approximately 1 km on the east crossing the rail line.

HATANA: Moving approximately 2 km ahead of the Karamana village, we reach the Hatana village.

SHESASHAYI MANDIR: Approximately 4 km east of Hatana is the Shesashayi Mandir. Here is a 5,000 year old Deity of Garbhodaksayi Vishnu and Laksmi Devi. These Deities are installed by Vajranabha on the banks of the Ksira Sagara Kund (ocean of milk). The Gopis and Gopas witnessed Lord Krishna here in the form of Ananta Shesa. When Lord Caitanya Mahaprabhu came to Vraj, He arrived here as well.

KSHIRSAGAR: This is a kund next to Shesashayi Mandir.

The waters of Yamuna have become celestially fragrant touching the divine limbs of Radha and Krishna during Their glorious transcendental pastimes and she expresses her ecstatic happiness smiling with foam and splashing water with her wavy hands. My humble prayers to Yamunadevi to bless us divine bliss.

PAIGAON: This is a village on the way to Sheragarh.

SHERGARH: On the western bank of Yamuna, approximately 20 km east of Koshi, this village is positioned