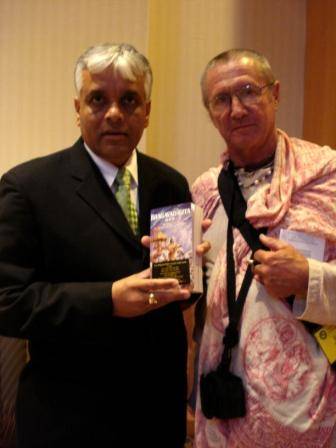 Hare Krsna… recently on a last minute effort, on Nov.18, I picked up Sikhi das and headed to Birmingham Al. from Murari Sevak….. It was good… Good decision….

At the Sheraton in Birmingham was a small regional convention of AAOHA members…. Asian American Hotel Owners Association. At the last international convention in June in Chicago, where I had met and made friends with the vice chairman of AAOHA, Mr. Hemant Patel,(next year he will be the chairman), my goal was to get a picture of he and I holding the Bhagavad Gita… thus endorsing the placement of Srimad Bhagavad Gitas, and opening the doors to many more hotels. I did not know whether he would even be at this small convention.

When we arrived, we were a little early and just milled about talking to the various hotel owners…etc. We were making some contacts and such… then one officer from the convention, asked us if we had made official arrangements to be here… I explained that we came at the last minute and were just trying to meet a few members. She was quite nice and assured me that it would have been fine if we had made previous arrangements, but just showing up like this was not acceptable… so we meandered out into the lobby and pondered the circumstances…

Just after that, the promoter of this regional convention, Mr Jay Patel, came up and in no uncertain terms, said we would have to leave….so….we were in …then we were out….then we were in…and now we were out.

Sikhi had disappeared… so I just walked around the corner and sat down on a plush bench… pondering the next move….I really wanted to get this picture with Hemant Patel, but no one could even tell me if he was even coming for sure…so I sat there thinking this over…..and suddenly like 2 luminescent demigods, around the corner comes Sikhi and Hemant Patel….I jumped to my feet and we greeted each other like old friends…. I asked him if he would mind taking a picture…he said sure…I handed the camera to Sikhi and…. Got It!… yea, the picture….Got it!

Briefly we explained the ins and outs to the past few moments. He said don’t worry, I will talk to Jay and he did and in 3 min we were back in…with a nice table, meeting everyone we could want to meet. Taking orders for over 1000 Bhagavad Gitas and making new friends.

One very interesting story…one hotel owner from Birmingham, after having received his Bhagavad Gitas from the last convention, said now he has to keep several cases on hand because the Gitas are always disappearing… I asked him how many… and he said already 50 were “stolen”. I asked him how many bibles went missing… he said none!

Anyway… we are never in control….we can only try to do our best with the limited intelligence we are afforded…seems Krsna will always fill our gaps…I think this is a paraphrase of a very famous Bhagavad Gita verse!

My special thanks and obeisances to my preceptors…Vaisaseka prabhu, Akruranath prabhu, Nandanandana prabhu, Milan, and other devotees of the Bhagavad Gitas to Hotels program, I’m sure to hear from them after this article is released… Hare Krsna.

( can this count as Murari’s book marathon.?)

4 Responses to “A Last minute decision!”