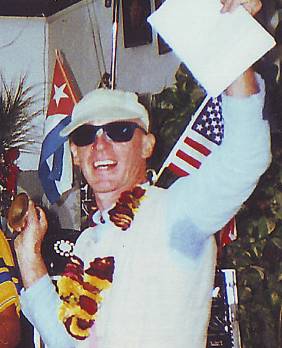 Sankarsana das: Paul Ignozza (recently initiated as Prahlad Nrsimha das by Hanumat Presaka Swami) passed away from this world at the age of 61 on December 11 shortly after 1 pm in a hospice in Port Charlotte, Florida. He suffered a long debilitating illness of squamous skin cancer which was very painful the last year of his life. He was an active member of the Miami temple for many years and served at other Florida temples as well. On December 9 and 10 Siddhavidya prabhu and me visited Prahlad Nrsimha. He was lying motionless on a recliner bed in a spacious room in the hospice. His body and face were emaciated and he appeared to be in an almost comatose condition. Half of his head was wrapped with a bandage to contain open sores and his exposed eye was shut tight. When we entered his room we announced ourselves and told him we brought him a garland from Radha-Vrajabihari and caranamrta from the Miami temple. I placed the garland across his abdomen and he lifted a bone like arm and put it on top of the garland. I then poured a little water caranamrta into his mouth and he managed to swallow it. Over the next several hours and into the following morning we chanted kirtan and read from the Krsna book to him (Siddhavidya had been doing this with Pralad Nrsimha regularly over the phone the last few months). Occasionally his breathing would lapse for long periods between breaths making us wonder if he had breathed his last at times. We hoped he would pass in our presence hearing kirtan or Krishna’s pastimes. Nonetheless a CD repeatedly played of Prabhupada chanting the bhajan “vande ‘ham sri-guroh sri-yuta-pada kamalam…” which commenced with the mahamantra. Prahlad Nrsimha left the details of his passing to a good local friend Robert Nelson who carefully made the arrangements according to Prahlad’s wishes. Robert also asked us for any further details which devotees observe and we added a few. Most of Prahlad Nrsimha’s ashes will be taken to India within the next few months to be merged in one of the sacred rivers there.

Prahlad Nrsimha’s spiritual life began as a teenager on the streets of New York city when he exchanged eye contact with His Divine Grace A.C. Bhaktivedanta Swami Prabhupada. At that time he was a brimming youth but he felt Prabhupada’s glance questioning his purpose in life and in his heart he thought he had met his guru. Later on he followed through very admirably on his spiritual quest.

For a great portion of Prahlad Nrsimha’s professional life he ran his own car detailing shop in Port Charlotte, but his real life was Harinama. During a six year period from 1994 to 2000 he lived at the Miami temple and made weekly visits to Port Charlotte to do a few jobs at his shop. He was active, multi talented and likeable and he had time to do a variety of temple services until it was time to go out on Harinama with Siddhavidya prabhu and other devotees. Out on Harinama Prahlad Nrsimha was in his element being happy to chant, share a smile, and always ready to encourage others to be Krishna conscious.

On the home front we gave Prahlad Nrsimha the nickname “the good egg” because he was always doing selfless good deeds for others. Once when being referred to as “the good egg” he quipped “There are so many rotten eggs in this world, so I might as well be one good egg”. A few examples of his selflessness I remember was when I had car trouble he analyzed the problem, told me where I could order the parts at the cheapest price, and then he put the parts in himself and refused to take a cent for it; if a guest came to the temple it was common to see Prahlad Nrsimha engaging the person in talks about Krishna with a smile on his face; whenever he turned up things started happening because he took the initiative to do the needful.

Robert made the observation that Prahlad Nrsimha had no self pity during his ordeal of living in pain at least for the last year of his life. He took no pain killers and just tried to focus his attention on Krishna. We pray for his successful sojourn back to the spiritual realm where we hope to enjoy his wonderful association again. Prahlad Nrsimha prabhu ki Jaya!!!

An Earnest Plea for Help
Varnasrama agenda at the Capitol