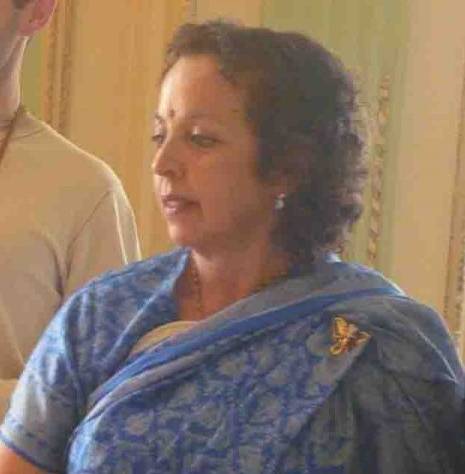 It is with great sadness that we announce the passing away of Marutvati Devi Dasi, a lovely disciple of Srila Prabhupada. She left this world on the morning of 15th December at her home in Soest, Netherlands. Her departure follows a long brave battle with cancer.

She was an extremely warm-hearted person, always full of energy and life. We will miss her greatly and offer our heartfelt condolences to her family and friends, especially her husband, Hare Krsna Dasa, her three lovely daughters, Vraja Sundari, Rasarani, and Sarada Sarita, and Baladeva her step-son. We pray that Lord Krishna blesses them all with the strength they need at this difficult time.

On Srila Prabhupada’s disappearance day, 2009, Marutvati went to Radhadesh temple in Belgium and spoke during the morning class along with other disciples of Srila Prabhupada – Rudradeva Dasa and Visakha Devi Dasi from the USA and Jaya Bhadra Dasi from Canada.

Here is a link to the recording. Marutvati is the second speaker, starting at 16:50 – www. radhadesh. com/en/node/1089

Here is a description about Marutvati’s life with details from an interview published in the November / December 2010 edition of the Dutch language magazine, Krishna Bhakti:

While living in Santiago, Chile, studying dance in the early seventies, Marutvati heard about the Hare Krishna movement. At that time she planned to enrol in a dance school in England and also find out more about the movement. When she moved to London she studied at the dance academy in London, and in her free time visited the temple.

A big inspiration for her were the songs of George Harrison. At a certain point, her attraction to Krishna became stronger than to her career, and she decided to dedicate her life only to Krishna.

By the summer of 1976 she was in London and had been visiting the temple in Bury place for several years. Then, she went to Amsterdam, where she decided to transfer from the London dance school to the Rotterdam Dance Academy. At that time she visited the Amsterdam temple.

Marutvati remembered the amazing kirtans there with Locanananda Dasa and Hari Krsna Dasa. She described how everybody was so enthusiastic and lively. At the time she felt this was really the right place for her, and forgetting her studies, she moved into the temple.

To begin with she wanted to use the skills she had learned and dance for the pleasure of Krishna. Parividha Dasa was then the head pujari in Amsterdam and he told her about a Krishna dance group in New York.

However, finding everything about the movement incredibly attractive, she gradually gave up her attachment to the performing arts and became inspired to simply focus on helping spread the mission of Krishna consciousness.

From the mid-70s to the mid-80s Marutvati was a dedicated and expert sankirtan devotee – leading up the ladies’ party. The party went all over the Netherlands and Belgium, and they sometimes also visited other countries such as Spain, France, and Italy.

Then, after spending some time in Radhadesh, Belgium, then the Manor, England, she and her family moved to Soest, where she lived for the last
20 years. At her house, there was a little temple with Radha-Krishna, Nrisimha, and Prabhupada Deities which she served daily. The Deities were her life and shelter. When she dressed her Deities, she felt very close to Krishna.

Although she studied hatha-yoga, chakra psychology, and other natural wellness techniques, she could see that they can help physically, but these methods do not give spiritual realisation. Because they are not given by a pure devotee of Krishna it is like having a light bulb, but not having electricity.

Marutvati used to carry the Nrisimha book everywhere she went. But she expressed that having Bhagavad-gita As It Is in her life was the greatest mercy of Srila Prabhupada, along with the chanting of the Holy Name of Krishna.

Whilst still in good health she ran a ballet school in Baarn where she gave classes. They had a good team working there, including her daughters, who also took up dance as a profession. For many years she also gave classes in hatha-yoga.

Marutvati had a special personal story about her spiritual master, Srila Prabhupada. Although it was a little difficult at the time she always remembered it with fondness.

In the early ’70s, while she was still visiting the temple, Vimuktasanga Dasa mentioned to her that Srila Prabhupada was visiting France, and that the devotees were going to see him. There would be initiations and so on. He invited her and made the arrangements. This was very special for her – the first time she would get to see her guru.

Although she was always well organised, keeping appointments etc, for some reason she showed up one day late for the trip. When she arrived at the temple the door was opened by Aharada Devi Dasi, who was very happy to see her because Aharada had stayed behind to take care of the Deities. So Marutvati stayed and helped her, and got a taste for being a simple servant and chanting Hare Krishna. The story has a happy ending, since a few months later she fulfilled her dream and took initiation from Srila Prabhupada.

One Response to “Marutvati Devi Dasi passes away”