Today The Greatest Dialogue In History, The Bhagavad Gita, Was Spoken By Krishna 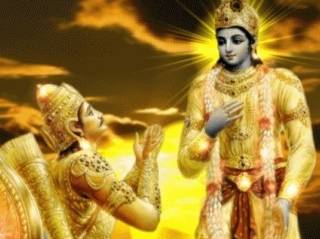 Two great armies assemble at the scene of Kurukseta, flying banners, drawn up opposite one another on the field, poised for battle. Arjuna and his charioteer Krishna are carrying their conversation between the two armies reflecting the indecision of Arjuna about the question; should he fight against and kill his friends, kinsmen and teacher?

And thus the greatest dialogue in history, the Song of God, is spoken by Krishna Himself to Arjuna. This dialogue will go on to be studied by the greatest leaders, philosophers, religionists and most importantly devotees of Lord Krishna. Although studied by many, the spirit of the Bhagavad Gita is not understood by all. It is mentioned in the Bhagavad Gita itself that, if one wants to take medicine, one must simply follow the instructions at the label. We cannot take the medicine according to our own whim or direction from a friend. It must be taken according to the direction of the given by the physician.

Also, the speaker of the Bhagavad Gita is Krishna himself, He is mentioned in the Gita as the Supreme Personality of Godhead. He is not a mystical, mythological or normal person but as confirmed by great acharyas such as His Divine Grace A.C. Bhaktivedanta Swami Srila Prabhupada, He is the Supreme Personalty of Godhead. He is the charioteer of Arjuna, the Hero of the Battlefield of Kuruksetra.

While seeing the two armies assembled, Arjuna instructs Krishna to drive the chariot so he can see the personalities of the opposition. After viewing his friends, kinsmen and teachers from the other part, Arjuna simply become confused and bewildered. He cast down his bow and arrows and sat down on the chariot, his mind overwhelmed with grief.

Now the conversations begin as questions and answers rose while the two armies and all present in the battlefield vividly hear the talks between Krishna and Arjuna.

Krishna has spoken, “While speaking learned words, you are mourning for what is not worthy of grief. Those who are wise lament neither for the living nor the dead.”

“Never was a time when I did not exist, or you, or all of these kings, nor in the future shall any of us cease to cease to be.”

“As the embodied soul continually passes, in this body, from boyhood to youth to old age, the soul continually passes into another body at death. The self-realized soul is not bewildered by such a change.” Krishna described to Arjuna about one’s real identity. We are not this temporary body; we are the life force or the living entity inside this body. Our original position was we are not the controller of all energy around us but instead we are the minute parts and parcel of the Supreme Person and our original function is to serve in devotion for the pleasure of the Supreme Personality of Godhead

Krishna imparts to Arjuna the most confidential knowledge. “Engage your mind always in thinking of Me, offer obeisance and worship me. Being completely absorbed in Me, surely you will come to me.” (Ch. 9 text 34)

He describes all things that represent the Supreme Lord. “Of all creations I am the beginning and the end and also the middle, O Arjuna, Of all sciences I am the spiritual science of the self, and among logicians I am the conscious truth.” (Ch.10 Text 32)

Krishna goes on to display the mystery of His univeral form.

So, Arjuna’s illusion is now gone, and he is acting according to Krsna’s instructions. Krsna, the driver of countless universes, is driving the chariot of Arjuna

So in perfect conclusion to the Bhagavad Gita and the perfection of renunciation, “Arjuna said, My dear Krishna, O infallible one, my illusion is now gone. I have regained my memory by Your mercy, and I am now firm and free from doubt and am prepared to act according to Your instructions.” (Ch. 18 Text 73)