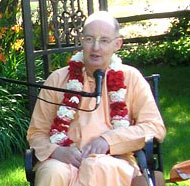 I want to apologize for the negative impact of my essay, “How All Generations Can Stay With Srila Prabhupada”, republished on the website “Dandavats”. It was originally written by me in 2002 and published in “Among Friends”, within a GBC position paper as well as on Chakra and VNN. Publishing it without my permission in the midst of so many letters criticizing you for your past mistakes or leaving ISKCON may appear to say things toward you, which I didn’t intend. I do not feel critical toward you and would not write any essay directly or indirectly attacking your action.

I feel that ISKCON should reach out to you in a forgiving mood. So the appearance of the essay by me, which was of a generic nature, embarrassed me by appearing as it did in the present time and circumstances, that is, at this time when criticism against you is almost daily fare. If read carefully the actual purport of the article calls for faith in the ISKCON Guru as one who demonstrates faith in Srila Prabhupada and brings devotees to him. This is what I would actually like to convey: that your disciples should have faith in you as a Prabhupadanuga spiritual master.

You have sufficiently paid for your past mistakes and it’s time for the GBC and compassionate leadership to show their forgiveness. In my own case I was recently received back among the devotees at the New Vrndaban Festival of Inspiration with great warmth and affection. I felt myself like the returned “prodigal son”, being accepted again after my fall. It was so healing to be embraced and applauded in the company of hundreds of Vaisnavas. This was real sanga and has inspired me to continue to associate with devotees.

Why can’t we give you a similar show of warmth? At least we should stop this pounding and allow you to preach in your own unique way. Let us encourage those who are willing, to see you as their guru to increase their faith in Prabhupada, his books and Krsna.

Yours in service to Prabhupada
Satsvarupa das Goswami

18 Comments to “ A little misunderstanding”