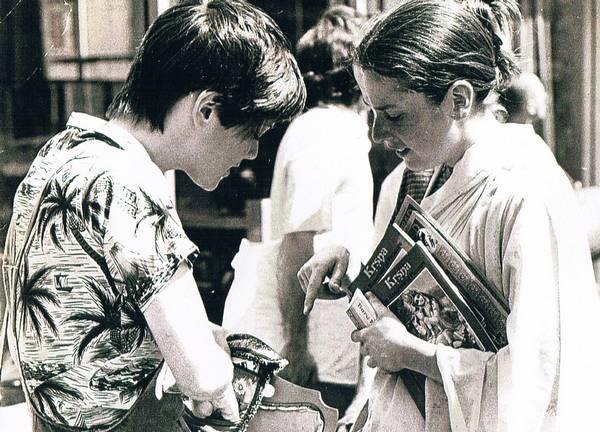 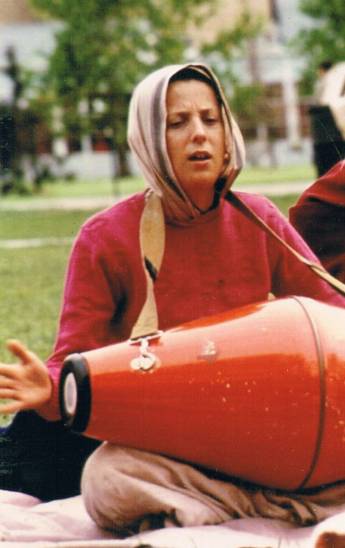 (A rememberance from the walkingmonk, Bhaktimarga swami. As posted on the web thewalkingmonk.blogspot.com )

Shelly Cook became a nun in the latter part of ’72 or early ’73 in the Krishna Consciousness movement. She joined the ashram, a rented Victoria home on 187 Gerrard Street, in what was known as the Cabbagetown section of Toronto. There on the second floor resided the women that she befriended while the men occupied the 3rd or top floor. Shelly became initiated as Bhadra Priya by His Divine Grace A.C. Bhaktivedanta Swami Prabhupada in late September of ’73 when all but five to six people stayed back from the usual crammed quarters of the ashram.

Our thirty-five, or so, residents had left for “sankirtan”, street chanting and distributing magazines and our home-made-family-business incense sticks. Shelly (or after referred to as Cheryl) and I stayed back for the ceremony, a fire sacrifice, as we called it then. My name was John and I became Bhaktimarga. Her name, Bhadra Priya, stayed with her for the time she was living with us in Toronto and during her stay in the ashram near Wheeling, West Virginia.

She was always dutiful, loyal and got along with all of us in the ashram. She first came as a genuine spiritual seeker and when she found Krishna she got hooked. I remember she was the ashram’s photographer. She loved to take pictures of the deities of Krishna. A friend described her as “simple, solid and positive.”

What is unfortunate is that she had to leave us. She was struggling with cancer for the last three years and was finally called to leave for a more painless life. She will be missed by those of us who knew her.

Bhadra Priya was born on Nov. 9th in 1946. She did leave ashram life for a time and worked with the Toronto Transit System as a driver on one of the city’s main routes for over twenty years. She put her heart into what she did. She was an avid spiritual reader. The last days spent were in Alachua, Florida with godsisters and friends. For the last hours people were chanting around her. It happened the way she wanted.

And for me, I always, always admired her strong sense of sincerity. She really was an inspiration to me.