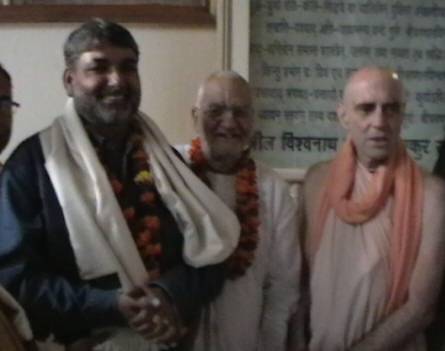 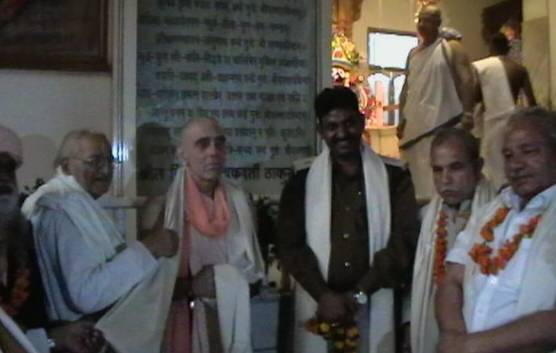 Though a month is gone after the departure of His Grace Pranav Das Prabhu, but, I came to know just recently.? Someone wrote a letter to my gurudev HH Hanumat Preshak Swami Maharaj, and he sent me a copy of that letter, then somehow, I got his family-members? phone nos. and talked to them and got confirmed that he is gone, So, I would like to share some thoughts about this great devotee.

He was a very senior disciple of His Holiness Gopal Krishna Goswami Maharaj.? He preached very extensively in and arond East Delhi and brought many many people to Krishna Consciousness.? Every year, he arranged a high profile Rath-Yatra in East Delhi, and not only that, he also arranged many Rath-yatras in the nearby towns. He was a man of Lord Jagannath, even he compiled a few small books about Jagannath, Chaitanya and Nityananda.? One of his dreams was to arrange a long Rath-Yatra from Kurukshetra to Vrindavan-a Rath-yatra which would go on for a month at least, and everybody discouraged him, they said that it is not possible, people won?t be helping you, this and that, but he was determined, somehow, he got the blessings of his guru maharaj and he did it, very successfully, I myself, took part in it and it was great, there were so many devotees there and when the Rath-Yatra arrived at ISKCON-Vrindavan-Shri-Shri Krishna-Balram Mandir, Pranav Das Prabhu’s joy knew no bounds, finally, his desire was fulfilled-bringing Dvarkadhish/Jagannath from Kurukshetra to Vrindavan, it was an amazing thing which he did and history would remember it.

He also published a spiritual newspaper and many other small booklets and pamphlets.? He also arranged on a regular basis morning nagar-sanikirtan (chanting in the streets) and the other remarkable achievement by him was the construction of the most beautiful ISKCON Ghaziabad temple.? He struggled very hard collecting the money and materials for the construction of this temple, not worrying about his health.? When the temple was inaugurated and His Holiness Gopal Krishna Maharaj came and he really appreciated the beauty of the temple and the hard work of his sincere disciple Pranav Das Prabhu.

Pranav Das Prabhu was physically not so healthy, but he had a plenty of energy to serve the cuase of Guru and Gauranga, he was more than seventy and above.? My guru maharaj His Holiness Hamumat Preshak Swami Maharaj lovingly called him Grandfather Bhishma, and he indeed, left his body on the day of Makar Sankranti-when Grandfather Bhishma left his body.? He was very dear to guru maharaj and whenever guru maharaj visited Vrindavan, he would always give shelter and prasadam to gurudev and to all other disciples and friends, he was a generous grihastha and extremely hospitable.?

When the news spread that Pranav Das Prabhu has left his body, many-many people/devotees/congregational members came to have his last darshan.? I talked to his wife, the glorious mother-Her Grace Shakuntla Mataji-who cooked Rajbhog for Their Lordships Shri-Shri Radha-Parthsarthi for many years and did hundreds of service for Their Lordships and for the other deities, told me that HH Gopal Krishna Goswami Maharaj came and spent almost two hours with the family-members and said,”I am proud of such a nice disciple and would miss him.?