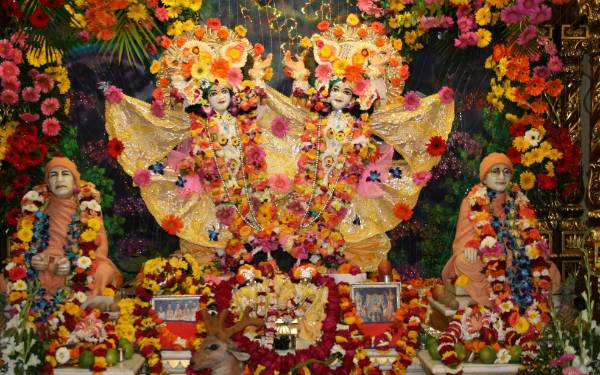 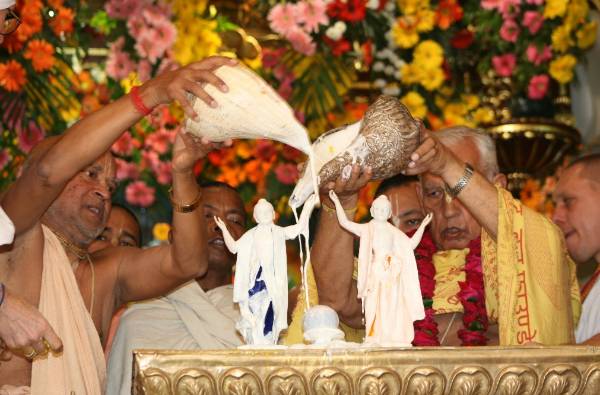 Nityananda Trayodasi is the appearance anniversary of Lord Nityananda.

Lord Nityananda, whose name means “eternally blissful”, is the brother of Lord Caitanya. They are traditionally worshipped together, as are Krishna and Balarama.

He is considered to be more merciful than Lord Caitanya because He is so eager to deliver the mercy of Lord Caitanya to everyone. If anyone can please Nitai even in the smallest way, then that person will receive a spiritual grace that will transform his life.

To invoke the mercy of Lord Nityananda, ISKCON Vrindavan celebrated His appearance day today in a very grand way.

For the last three days we were hearing the glories of Lord Nityananda Prabhu from HH Subhaga Swami Maharaja.

There was also a series of Hari Katha given by HH Radha Govinda Maharaja on “Akrur Manorath” for the last five days at our newly renovated Balaram Hall. HG Bhurijan Prabhu is still continuing to read from the Krishna book for the last one month at Srila Prabhupada’s quarters every night.

The whole Krishna Balaram temple was gorgeously decorated with various local and imported flowers. Everywhere you will find flower bouquets, garlands in varieties of colors hanging all around the temple room. All the three altars and Srila Prabhupada’s Samadhi Mandir were artistically decorated by our pujaris as well.

Today’s Guru Puja for Srila Prabhupada was held before the Darshan Aratik of Their Lordships. As soon as conch blew for the Darshan Aratik all the devotees who are eager to get the Lord’s mercy were pushing each other to have full view of Sri Sri Gaura Nitai. The whole temple room was full of devotees.

When the curtain opened everyone was astounded seeing the beautiful forms of Sri Sri Gaura Nitai, Sri Sri Krishna-Balaram, and Sri Sri Radha-Shyamsundar, Lalita and Vishaka being adorned with Their new outfits. Their Lordships were artistically decorated by varieties of flowers. An ecstatic Kirtan went on till 8:00AM that was led by HG Janardana Prabhu.

The classes about the glories of Lord Nityananda Prabhu began immediately after the kirtan. HH Janananda Maharaja and HG Bhurijana Prabhu gave the class in English and HH Subhaga Swami Maharaja and HH Probodhananda Sarasvati Swami both gave the class in Hindi. All of the devotees listened with rapt attention which was spiritually purifying to everyone.

At 10:15AM, an abhishekh was performed for Sri Sri Gaura Nitai in front of the main altar while a blissful kirtan was being led by HG Panca Gauda Prabhu along with hundreds of devotees.

Our students from the Bhaktivedanta Gurukula and International School performed an abhisekh for their own Gaura Nitai. A fantastic drama was also performed by them in honor of Lord Nityananda which amused all of the spectators.

And finally after fasting till noon, we had a sumptuous feast Prasad for everyone. Almost 1,000 devotees honored the Lord’s feast.

We hope that you can also be with us to give your association for our next festival, Gaura Purnima, which will be held on 19th of March.