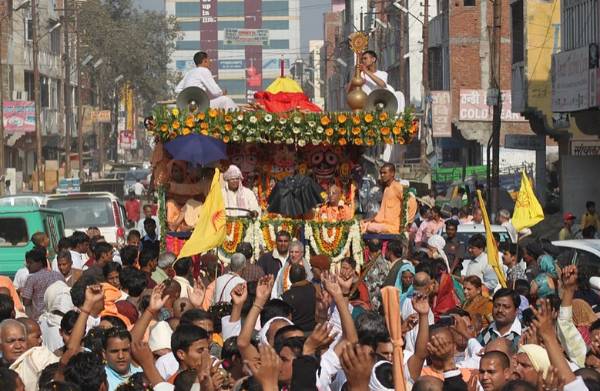 Kanpur is India’s tenth largest city, and the largest city in Uttar Pradesh with a population of approximately fifty lakhs (five million). Kanpur is famous as an Industrial and business center. Kanpur is located on the bank of the holy Ganga nadi (Ganges River), some three hundred and fifty kilometers Southeast of Vrindavan.

On Monday February 7, 2011, ISKCON Kanpur organized a grand “Jagannath Rathayatra festival” at Kanpur. Beginning at the well known park at “Phul Bhag” (“park of flowers”) at around 2 PM, the procession, accompanied by a large group of devotees from ISKCON centers at Bombay, Vrindavan, Mayapur, Lucknow, Patna, Allahabad, Benares, Jhansi, and other places began it’s journey though a long stretch of Kanpur’s “old market” area.

The next day, Tuesday, February 8, 2011, Radhanath Swami and Radheshyam Das joined with the other devotees to participate in the Paatotsav, bhumi puja, and installation of Ananta Shesh, both in a very fancy “pandal” (tent), erected next to the site for the construction of a grand temple for Sri Sri Radha Madhava.

The Deities of Sri Sri Radha Madhava were installed a year back on the same day at ISKCON Kanpur, which is located on the “Bithoor Road”, on the outskirts of Kanpur city.

Bithoor is a holy place situated eight kilometers (five miles) from ISKCON Kanpur. In the Puranas, Bithoor, situated on the banks of the Ganga, is referred to as “Brahmavarta”, the “center of the Universe”. Bithoor is also situated nearby the “Valmiki ashram”, where the “adi-kavi” (original poet), the sage Valmiki composed the Ramayana (also known as the “Valmiki Ramayana”) in twenty four thousand Samskrita verses, ages ago!

Shitalanga Gauranga Das and Sevatulya Das led the group of devotees in a large fire sacrifice and other rituals connected with the bhumi puja and installation of Ananta Shesh. Construction of the new temple project is to begin immediately.

Devakinandan Das announced a generous donation by Sri M. K. Jalan of Rupees twenty five lakhs (Rs. two and a half million – US dollars fifty thousand) towards the temple construction. The projected budget for the project at Kanpur is Rupees thirty crore (Rs. three hundred million – US dollars six million).

Devakinandan Das in his address to the assembly after the bhumi pointed out that Srila Prabhupada had written seventeen letters wherein he stressed the necessity of ISKCON establishing a center and building a temple at Kanpur. ISKCON Kanpur now has twelve acres of land where the project will be developed. Already a temporary temple, ashram and goshalla are functioning on the land.

After the speeches, there were several cultural programs and bhajanas and kirtans by gurukula students from ISKCON Vrindavan.

Free and Happy Within Prison Walls

View from a hospital