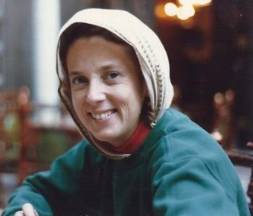 Bhadra Priya joined ISKCON in 1972 in Montreal, Canada. Shortly thereafter she moved to the temple in Toronto where she was initiated by His Divine Grace Srila Prabhupada in 1973. She did many different types of service including nam sankirtan and book distribution. One special service that she was known for was cooking milk sweets for Radha Ksira Cora Gopinath for up to 10 hours each day. She was really absorbed in this service and was especially happy when she was able to create a different type of sweet for the Lord’s pleasure.

She traveled to India with Laxmimoni and spent several months there. She helped Laxmimoni make a vyasasana for Srila Prabhupada in New Delhi. She took many photographs of Srila Prabhupada and one day he stopped and asked her about her camera.

She also met Yamuna devi at this time and was engaged in washing Yamuna’s cooking pots in the Yamuna river with sand and frayed ropes. Yamuna devi praised her for cleaning the pots so thoroughly and removing all the black spots from the bottom of the pots which was of particular importance to Srila Prabhupada.

In the mid 70’s she moved to New Vrindavan and joined the traveling Sankirtan party. Everyone wanted to travel with her as she was a quiet and kind devotee as well as a competent and safe driver and was a lot of fun to be with. She did this service faithfully and dutifully for years.

In the mid eighties Bhadra Priya participated in Radhanatha Swami’s University preaching programs. She would prepare five course feasts for hundreds of students. She would pour over cook books and meditate on how to make the presentation as attractive and delicious as possible.

In 1986 she moved back to Toronto and eventually worked for the Toronto transit system for about 15 years. During this time, she delved deeply into religious and metaphysical teachings. Ultimately, this greatly strengthened her conviction that Krishna Consciousness as presented by Srila Prabhupada is the absolute truth.

In January 2008, she was diagnosed with very advanced cervical cancer. In January 2010 she moved to the Alachua community where she received daily care and deepened her relationship with Srila Prabhupada, Lord Krishna and the devotees. With determination, desire and the Lord’s arrangement, she lived a great deal longer than expected. She dedicated herself to making it to the temple each day for class and Darshan as long as she was able. When that was no longer possible, she found great joy visiting temples around the world on the internet to see Their Lordships and hear Srimad Bhagavatam.

For the last year of her life she lived at Sita Rama ashram (home of Devarsi and Nirmala) where she received care from them and Sumati. One of her inspiring endeavors was to begin a reading club that took place four days a week. She seriously studied Krishna Book and Srimad Bhagavatam with her spiritual family; this was her greatest joy until her departure. She remained sharp and determined throughout this time. Even on the day of her passing the reading club stood around her bed and read to her. While not able to speak she appeared happy and satisfied.

Monday, February 7, 2011 was the day of her departure and a most auspicious day; it was Vasant Pancami, the appearance of Srimati Visnupriya Devi, Srila Raghunatha Dasa Goswami, Sri Raghunandana Thakura and Sri Pundarika Vidyanidhi. It was also the disappearance of Srila Visvanatha Cakravarti Thakura and Saraswati Puja. This day truly signified a day of new beginnings.

Bhadra Priya entered the active phase of dying that morning. The stage was set for a miraculous passing as Lord Nrsimhadeva and Tulasi Maharani arrived along with holy waters and holy dust. Devotees took turns holding pictures of Srila Prabhupada and Radhe Syam in front of her. She lay on her bed surrounded by loving friends who were holding and stroking her. The room filled with the celestial sounds of the holy names throughout the day and evening until after her passing at 11:40 PM. The atmosphere was spiritually surcharged with an outpouring of love and gratitude for our Lords, Srila Prabhupada, the devotees and the mercy Bhadra Priya Prabhu was receiving.

On February 10th, Srila Advaita Acarya’s appearance day she was cremated and then honored that evening with kirtan, a feast and remembrances of her qualities, her life and how she deeply touched the lives of her friends.

Some of her qualities that were appreciated are;
She loved serving the devotees.
She always rallied for the underdog.
She was very determined and gave 100% to whatever she was doing.
She was generous, kind and extremely loyal.
She was direct and straightforward in her dealings.
She was very conscientious and appreciative.
She was extremely clean, neat and organized.
She diffused difficult situations with her humor.

Though we weep in her absence, we take solace knowing that she continues in her devotional service to Srila Prabhupada and Lord Krishna.

Yours in service
Nirmala, Sumati and Devarsi das

The departure of HDG S. Bhaktisiddhanta Sarasvati Thakura as narrated by a personal witness