Animal Slaughter Equals Social Unrest. The U.N. And U.S. Fed Chair, Bernake Back It Up 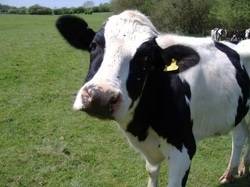 In recent weeks you have probably noticed more social unrest and rioting around the world. This is being directly caused by increased slaughter of animals. The most influential and recognized economist in the world, U.S. Federal Reserve Chairman Ben Bernanke recognized this issue this month and so does the United Nation.

I watched the news clip live a few weeks ago as Ben Bernanke talked about the co-relation of eating beef and rising food prices and it drove me to find the quote from Reuters and write this article.

The U.N. Food and Agriculture Organisation Food Price Index on Thursday touched its highest level since records began in 1990 as rising food prices showed no sign of relenting, prompting concerns of social unrest.

He (Bernanke) said higher food prices were stoked by increasing consumer demand in emerging economies for such things as meat.

“As people’s diets are becoming more sophisticated and as they eat more beef and less grains and so on, the demand for food and energy rise and that’s the primary long-term factor affecting the real price of commodity and food,” Bernanke said.
—end—

Bernanke says their diets are becoming more “sophisticated” but in reality “barbarian” is more apt of a term. Now it does not take a genius economist to figure out how to resolve this social unrest and looming crisis for inflation and food prices. It will simply take a return to a natural human diet of vegetarian food.

To explain the crisis some simple stats comparing the production of beef to wheat. It takes 18 times more fossil fuel per calorie to produce beef compared to wheat. It takes 15 times the land to produce beef. It takes a whopping 200 times the water to produce a pound of beef compared to wheat. The ratios are similarly disproportionate for all major categories of grains. This animals are bred by meat producers and fattened up by giving them about 16 pounds of grain for every pound of beef produced.

All of the above stats do not take into account the inhumane conditions and countless suffering animals are put through just to feed a barbarian diet. Of course, the serious karmic reactions of animal killing is on top of all of these basic arguments.