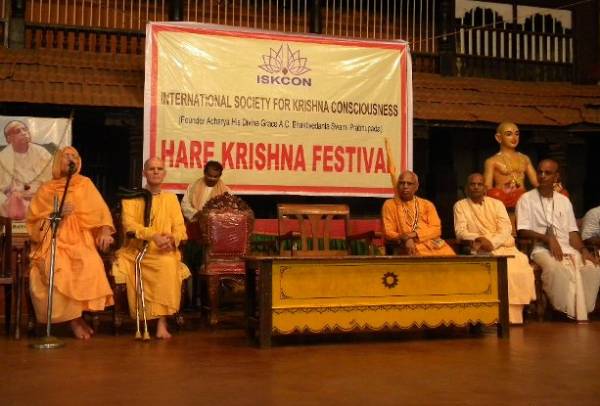 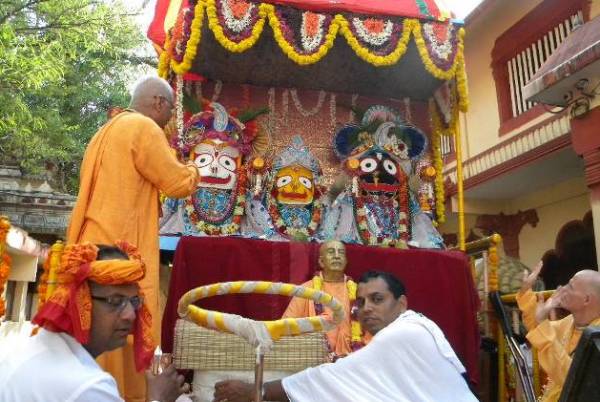 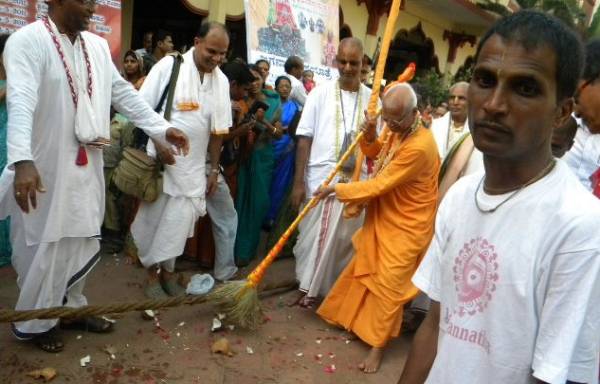 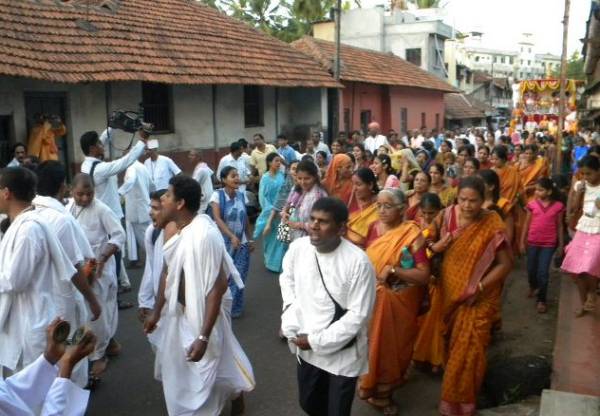 On Saturday, May 7, 2011, in the sacred land of Dakshin Vrindavana, devotees from ISKCON Mangalore, ISKCON Belgaum, ISKCON Madhurai, ISKCON Bangalore, Manipal BYS, Udupi and Sahyadri Sri Krishna Balarama Ksetra joined the Udupi Dhamvasis to participate in the most auspicious Lord Jagannatha Ratha Yatra festival organized under the leadership of His Grace Shankhadhari prabhu, Zonal Secretary for Karnataka and His Grace Parampara prabhu, organizer of the event.

Being members of the Brahma Madhva Gaudiya Vaisnavas sampradaya, devotees of ISKCON consider holding such an auspicious ceremony in this sacred and historical town of Udupi as most significant. Udupi is the revered abode of Srila Madhvacarya, the main acarya of the Brahma Madhva Gaudiya Vaisnava sampradaya, who established the beautiful deity of Lord Krishna in the 13th century. From Srila Madhvacarya many renowned acaryas have descended such as Srila Madhavendra Puri, the spiritual master of great personalities like Srila Advaita Acharya and Srila Isvara Puri, who is the initiating spiritual master of Sri Caitanya Mahaprabhu. From Lord Caitanya Mahaprabhu, the line of prominent acaryas has continued through the six Goswamis of Vrindavana, followed by many other renowned Vaisnavas such as Srila Narottama Das Thakur, Srila Shyamananda Pandita, Srila Srinivas Acarya, and more recently continuing through to Srila Bhaktivinoda Thakura, Srila Gour Kisora Das Babaji Maharaja, Srila Bhaktisiddanta Sarasvati Thakura and ISKCON Founder-Acarya His Divine Grace A. C. Bhaktivedanta Swami Prabhupada who was the first to introduce Jagannatha Ratha Yatra festivals outside of India.
The Udupi Sri Krishna Math is also famous for the Lord’s devotee, Kanakadasa, who although a devout worshiper, was not allowed to enter the temple. As a humble devotee, Kanakadasa did not protest, but instead increased his devotion to the Lord. Lord Krishna was so pleased that He allowed His disciple to have His personal darshan through a small window at the back of the temple. To this day, visiting devotees still worship Lord Krishna by praying through the same window where Kanakadasa was blessed to have His darshan.
The inauguration of Lord Jagannatha’s Ratha Yatra festival was conducted at “Rajangana” which is located near the Udupi Sri Krishna Matha and which serves as the Udupi Math’s Community Hall. In attendance at the ceremony were His Holiness Lokanath Swami, His Holiness Bhakti Vikas Swami, His Holiness Radha Raman Swami, His Holiness Bhakti Raghava Swami, His Grace Shankhadhari das and His Grace Parampara das. All the sannyasis were offered gifts of fruit prasadam and then invited for the auspicious “lighting of the lamps”. Various speeches were then delivered beginning from His Holiness Bhakti Vikas Maharaja who spoke in Hindi to an audience of several hundreds. Also present at the inauguration were various local dignitaries such as Shri Raghupathi Bhat, local MLA for Udupi, Shri Divakar Shetty, a well known local business man who has been actively supporting the local preaching efforts since many years, Shri Jayakrishna Shetty, who serves as the Chairperson of Parisara – Protection and Preservation of Trees and Nature, Shri Bhuvanendra Kidiyoor, a successful business man, and Shri Kiran Kuman, Municipal Corporation President. All the guests received a beautiful laminated picture of Sri Sri Radha and Krishna from the organizers.

After performing Aratika to Lord Jagannatha, which was followed by the traditional sweeping of the road in front of Lord Jagannatha’s cart and the breaking of coconuts, Lord Jagannatha happily and majestically began his tour surrounding the Udupi Sri Krishna Math. The procession moved smoothly along the Vadriraja Road, passing along Shri Laksmi Venkatesh Temple Road, following Diana Circle, along K.M. Marg and Car Street and then back to “Rajangana”. Although initially the crowd was modest, soon after the procession began, the number of devotees gracing the occasion gradually swelled to an estimated 2000 participants. The town of Udupi daily attracts thousands of pilgrims from different parts of India. Many local village people who had come to take darshan of Udupi Krishna, upon seeing the Ratha Yatra procession, very eagerly joined the festival by holding the rope pulling the Lord’s Chariot.

The procession started at 4:00 p.m. and ended around 8:30 pm moving through the narrow roads surrounding the Udupi Sri Krishna Math. In some places, Lord Jagannatha’s Cart was practically touching some of the local residence, giving local residents a very rare darshan of Lord Jagannatha. Devotees performed melodious and powerful kirtans during the entire procession attracting the attention of all who were passing by. A few devotees also distributed Srila Prabhupada’s books along the road. The Ratha Yatra Cart, as well as Lord Jagannatha, Lord Baladeva and Lady Subhadra had come all the way from ISKCON Belgaum whose devotees worked very hard to prepare the cart for the auspicious event.

At the closing of the auspicious event, Parampara prabhu expressed his gratitude to all the participants and invited everyone to help make next year’s Udupi Krishna Jagannatha Ratha Yatra festival even more glamorous. Jaya Jagannatha ki Jaya!